WEATHER
Visibility: Very bad, due to the very smoky conditions.
Wind: Light and variable.
Altitudes: 1200 ft. AGL max. in order to stay legal VFR ( in "class G" uncontrolled airspace, 1mile visibility, and clear of clouds, of which there were none, just a lot of smoke)
Time Aloft: maybe 15. minutes
Max Lift: None. (We didn't even try).
Temperature: About 92 deg. F.
Comment:
Tow pilot: Dan Gudgel
A few die-hards came out today in spite of the ugly sky conditions. Thomas Wolf is working on getting ready to solo in the 2-33. He flew quite a bit near his home  at Hinkley gliderport near Chicago this summer, about 25 flights  in an ASK-21, after a very small number of 2-33 flights last school year here at Avenal. He mainly is getting used to the 2-33 again,  and getting familiar with the Avenal gliderport area and it's procedures again. He did some pattern tows today, which was as high as we could go and still stay legal under VFR rules. We were listening to the ATIS and AWOS reports from nearby airports such as Hanford and Lemoore, which were reporting 1.5-2.5  miles visibility most of the time,  and that  seemed consistent with what we were estimating here at Avenal. Aleks Radko was flying his Glasflugel 304. I believe he's flown more than anyone else in the club for the past 2 years! He comes out regularly and flies in all different types of conditions, and his very good flying shows it as well!
Dan Gudgel flew out with  his  power student in Dan's Citabria. I believe Dan said they also had to stay below 1200 ft AGL in order to be in legal VFR conditions during their flights in both directions.  His student was very patient.  and helped everyone with towlines, wing running and other launching duties during the time Dan was towing for us. 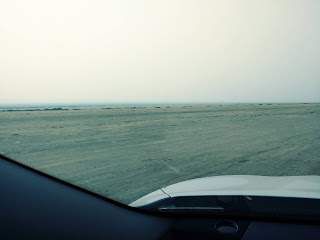 Very poor visibility looking towards the NW from the clubhouse area.

Posted by Alex Caldwell at 6:24 PM