WEATHER
Visibility: about 6 to 8  miles, in mild to moderate haze and light smoke
Wind: light and variable all day
Altitudes: approximately 6000 ft MSL by Zach Yamauchi in his Standard Discus
Time Aloft: 1 hour, 22 min. and 44 sec. also  by Zach Yamauchi  in the Standard Discus.
Max Lift: 4 kts.
Temperature: 93 deg. F. on the clubhouse porch.
Comment: Not quite as clear,  and not quite as good lift as last week. But a nice fall training day,  none the less.
Tow pilot: Karl Kunz 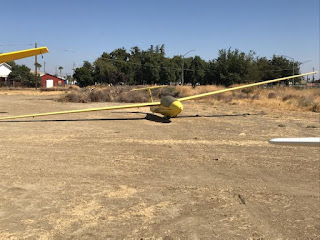 Richard Walker was out today and flew his Schweizer 1-35. It has 90 deg. flaps for glide path control on landing.  It uses no spoilers. He makes very accurate landings with the system, usually rolling right up adjacent to his hangar, for a short push to the hangar for storing the glider all assembled until the next flight. Of course, his experience at landing those USAF B-52s may have helped some!
You can see a small portion of the wing of Zach Yamauchi's  Discus in the picture off to the right. Zach had the best flight of the day, staying up 1 hour, 22 minutes and 44 seconds, and flying north towards Coalinga,  for a total distance of 100.4km and a speed of 72.8km per hour.  But he modestly commented on the OLC web page that it was not that good a day, and he really couldn't go anywhere! Actually, it was the No. 1 flight on the OLC for today in the USA Soaring Region 11, which includes Northern CA, Nevada, and Hawaii!
Zach's flight on the OLC 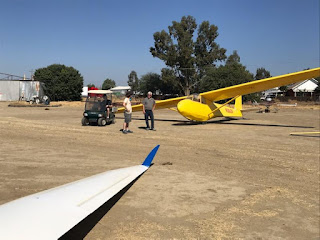 Mark VanBergen, Daniel Diazdelcastillo, and Logan Stevens all came out and flew in the 2-33 N3613F for more training. All are doing very well, making good progress,   and we're anticipating more solos in the near future and some new licenses and glider ratings as well.  The morning air was very smooth and good for practicing take offs, boxing the wake on tow, slips and accuracy landings.  There were also some weak, but still nice thermals,  that allowed us to  keep the 2-33 up for a while during the best part of the day,  and resulted in some modest climbs a few times back up from pattern altitude to 2000 AGL, maybe 4 or 5 times on various flights. The longest training flight was about 45 minutes long. 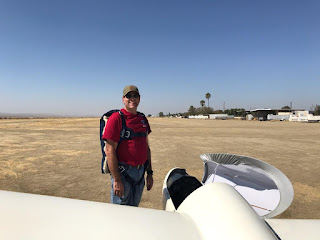 Ken Talovich getting ready to fly his Discus sailplane. He's enjoying it a lot,  I think, as you can tell by the smile! Ken flies down from his home airport in his beautiful RV-8, which he built himself. He's been landing it at New Coalinga and driving over to Avenal from there to fly the glider.   He's also a former hang glider pilot, so he should also be good at soaring in sailplanes,  if the other former hang glider pilots in our club are any indicator. 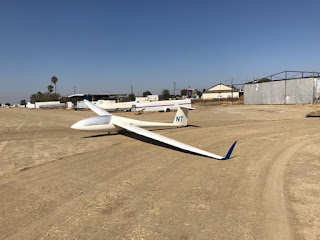 A more  all inclusive view of Ken's beautiful Discus sailplane.  He installed the winglets himself. He plans on refinishing it eventually,  when time allows, hopefully this winter.
Lou Marquez opened his trailers again,  and we got a much better view of both aircraft in there today. We still aren't sure if the Jantar is a 2A or a 2B yet.
Karl Kunz, our tow pilot today flew all the way down from Monterey in his beautiful Cessna 170 to fly the tow plane for us. It's always nice to have a recently retired United Airlines Senior 777 Captain to be your tow pilot!

Posted by Alex Caldwell at 8:04 PM