Another nice Fall day was had at Avenal today. The weather was very pleasant,  just barely hitting the low to mid 80s,  according to my Mother Nature provided on-board temperature sensors.  The winds were light all day,  mostly out of the SSE. Operations were on runway 31 early on, later switching to runway 13 when the wind came up to about 12 kts.  for a while.

There was lift over the valley, properly known as the Kettleman Plain,  with Andy Reisteter in the Russia, Joe Anastasio in the PW-5,  and Jan Zanutto in the DG 100 staying up most of the afternoon and reporting they thought there was a convergence over the valley.  There were a number of good looking dust devils during the afternoon just along the edge of the Kreyenhagen hills to the West of the field, and a few more right near the field just to the NorthWest. The RASP soaring forecast  was saying thermals might top out about 3500ft MSL at 3:00pm at the Avenal Airport.  I'm not sure what altitudes were actually achieved by the group above.

ER was calling near Avenal on the radio, I believe he had taken off at Hollister and was somewhere to the west of Black Mountain.

Early in the day,  Dan Gudgel was flying with his students Tom Nichols and Dan Clark. Tom left about noon, but Dan Clark and Dan Gudgel flew two more flights late in the afternoon.

Keith Curry, Mike Paoli and Vance Ray were out and all made solo flights in the club 2-33s, in addition to running wings, hooking up towlines and fueling the tow plane.

Al Leffler flew over from his ranch at Poso in his beautiful Sport Cub. He stayed for quite a while,  and imparted some of his vast experience in contest soaring and cross country soaring to some of the newbies on the front porch. We were treated to a very short take-off when he left to fly home. For those who don't know, Al is a two time U.S. Open Class national soaring champion. He has flown in and won many other soaring contests over the years in both the Open Class and the 15 meter class. He has been a regular contestant and winner  at the Central California Soaring Club Spring Contest over the years.   He may be best known, however as the coiner of the term "Kiddie Gliders" when referring to 15 meter gliders with their limited wing spans compared to Open Class ships.

Yutaka Buto came out and helped out but did not fly.

Pancho Herrera arrived late and was working on 4M the Standard Libelle. He is staying over night at the clubhouse tonight.

Darin Council came out and is working on getting checked out in the 1-26. He flew with me and made two accuracy landings. He also has now earned his A, B and C badges, which will be reported to the SSA, and should appear in Soaring Magazine.

Jim Rickey arrived from Hanford in his beautiful Cessna 210.  After performing duties as chef for our hamburger lunch, he  flew a 1 hour solo flight in Big Bird. This was only his third solo in a glider.  With this flight, he  earned a B soaring badge, which was presented on the clubhouse porch by SSA instructor Alex Caldwell.   Earlier in the same day, Jim had been flying Young Eagles rides in the Cessna 210 with the EAA group.

Matt Potter,  who is a very experienced hang glider pilot, was out again,  and is checking out the club.  He is thinking of converting to sailplanes.   Matt has already passed the private pilot glider written exam, which is a hurdle for some the rest  of us.

Steve Schery performed towing duties most the day.  We were very grateful to him for giving up his own soaring day to tow for us.  Alex Caldwell picked up the towing for the last few tows of the day.

Hope I didn't forget anybody. Please send any pictures,  as I was too busy to think of taking any today.

Posted by Alex Caldwell at 1:37 PM No comments: 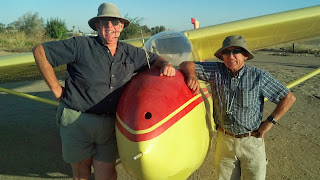 On Sunday Oct 5, Jim Rickey soloed in the 2-33 "Big Bird", with Peter Mersino doing the towing, and Yutaka Butto running his wing.  Congratulations to Jim! I got it on video from the above link for your perusal and critique.  It was a really nice day out there at Avenal. Maximum temps I think were in the very comfortable mid 80s,  but there was lift over the valley most of the afternoon. Just enough to stay up, but not much turbulence on tow. The wind was out of the SSE most of the afternoon. Not really very windy, maybe 10 -12  kts.,  but just enough to cause us to operate off runway 13 most of the afternoon.  It became light and variable late in the day,  and we switched back to 31. Andy was up most of the afternoon in his Russia. Karl Kunz decided to not put together the AS-W 20,  but couldn't resist flying, so he went up in the 1-26.  Dan Gudgel stayed out there all day with his student  Dan Clark.  George Garcia from Las Vegas was driving along highway 33 on the way to a Chargers/Raiders football game in the Bay Area. Don't ask me how he got lost and ended up on Highway 33. Anyway, he happened to see the gliders, so he stopped in and got an introductory lesson.   Jack Knudsen was out with his Dad,  and flew Big Bird, staying up very well in the weak conditions. Mike Paoli and Vance Ray were out and made solo flights and we all hung around the patio eating the lemon cookies left there by Peter. There was quite a bit of dirt that had blown onto the patio from the wind event we had on last Thurs./Friday,  and we all took turns sweeping it off the patio.  A side benefit of the big wind was that all the tumbleweeds we cut last week have disappeared. They are probably in Kern County somewhere.     Morgan's friend from hang gliding,  Matt Potter,  from Los Osos,  came out.  Matt is a hang glider pilot and has quite a bit of student power time over the years.  He says he is going to join the club, get his gilder add-on rating,  and wants to get his own glider eventually. He had one lesson with Harold last year, along with a X-country  flight with Morgan in the DuoDiscus.