This Trip Even Counts as an Airplane Cross Country! 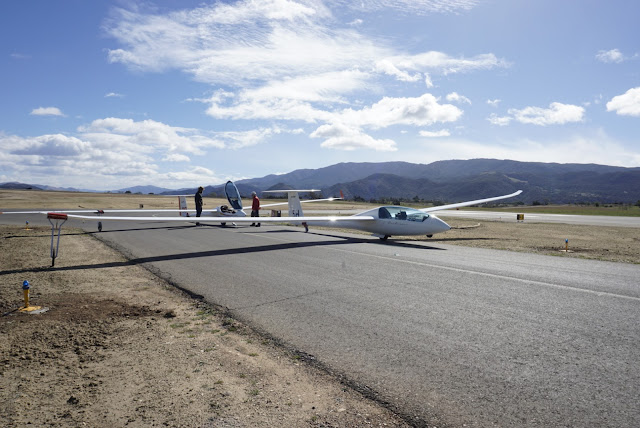 On 2/19/18 I had the incredible opportunity to fly with Morgan in his Duo Discus on a XC launching out of Santa Ynez.


The day started, as it ended, cold and windy.  We arrived at Santa Ynez at about 10:30am and were met with cold post-frontal conditions.  We met Ramy Yanetz, the other pilot launching out of Santa Ynez that day and began rigging.  As the wings slid into the gliders we watched as the low clouds from the front began to burn off and the sky filled with little puffy cu.  Me and Neiman Walker, our ground crew for the day, also did a fair bit of ogaling at Ramy's  new 18m ASG 29. 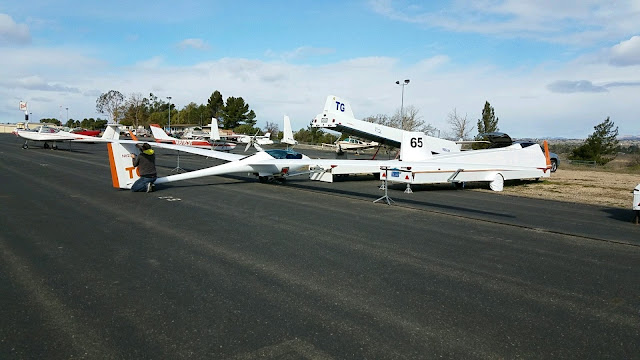 Once the gliders were rigged we pushed out onto to the taxiway and began to prep for launch.  As we were pushing out we began noticing not only some nice looking cu popping up just to the south with lenticular clouds forming over them, marking the scattered bits of wave we would encounter later in the flight. 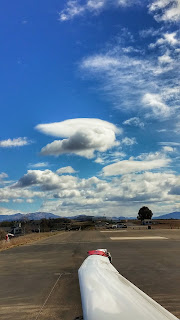 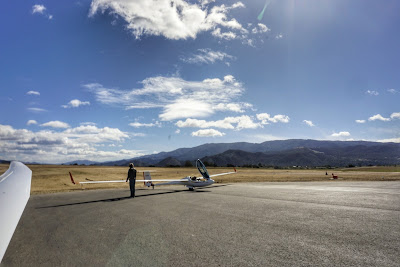 The tow was quite normal other than a 172 having to do a go around above us because we didn't get hooked up and launch quick enough.  We towed to the Santa Ynez range where the 15kt winds from the north were producing very workable ridge and thermal lift.  We used the ridge to climb up to about 5000ft and made our first unsuccessful attempt to connect thermal lift the clouds were marking.  With the strong wind and early morning light convection, we were not able to connect with anything meaningful and circled back to the ridge to climb back up and try again.

It was here that we were able to connect with a bit of what Morgan described as bow wave off the Sant Ynez Range.  With this, we were able to climb up to about 7000 thus getting us slightly above cloud base.  We again pushed north to try and connect with them, at this point, a fairly obvious cloud street forming just beyond Mt. Figueroa.  As we got closer to Figeroa we watched as Ramy climbed out and connected with the clouds, but we again were met with disorganized and unpredictable lift.

We spent the better part of an hour trying to find a meaningful thermal on the southern hillside of Figueroa, and with unpredictable winds, and disorganized lift I was faced with a few situations that I would have been very scared had such an experienced pilot as Morgan not been at the controls.  Eventually, we were able to find a decent thermal and climb out into the cloud street and the day was on. 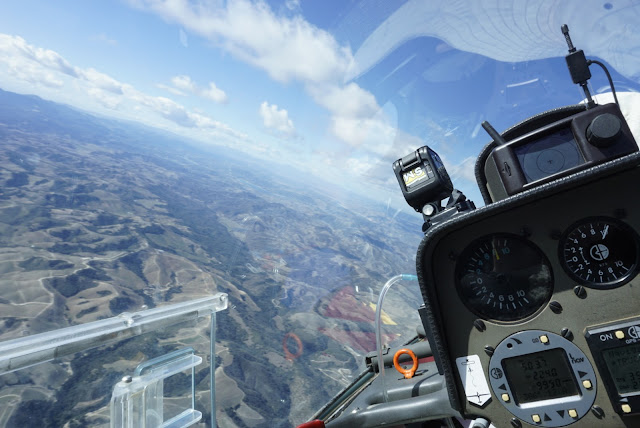 Once we got over Figueroa and into the convergence line the lift was very good.  We were able to dolphin fly for the majority of the way north while staying within 1000ft of bases, which were now at around 7000ft. It was at this point that I gave Neiman a call and told him we had connected and he could head back to SLO.  We continued in the convergence line toward SLO making a good time especially considering we had a decent bit of headwind.

Around 2:30, we made it to Paso, well within glide of SLO but decided to keep on going since the lift was still working great.  About 30 miles north of SLO we started seeing some very interesting clouds in the line northeast of us.  They seemed to be dumping what looked like snow but it was evaporating before hitting the ground, thus we ended up calling it snow virga. 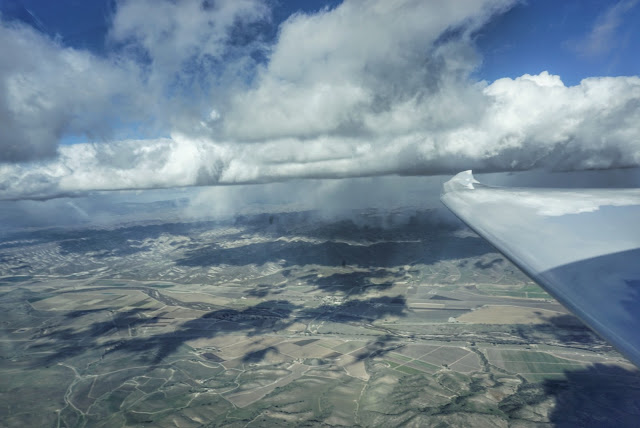 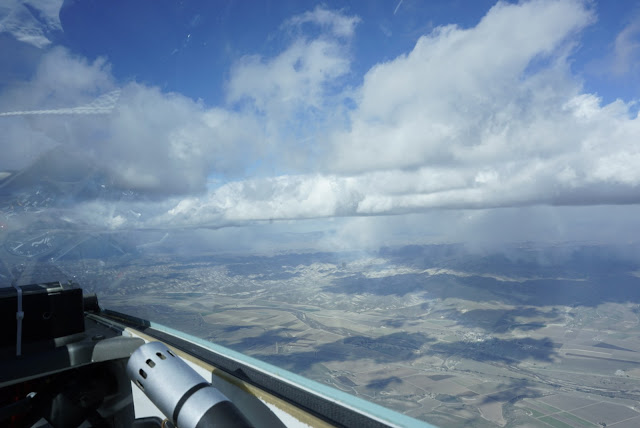 As we got closer to King City and further away from SLO the lift slowly decreased which meant more circling and less dolphin flying.  I didn't mind much though because it gave me a chance to learn how to thermal the Duo from the back seat, not an easy task. 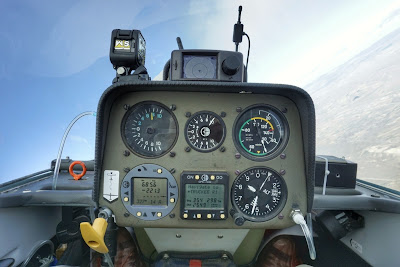 At 3:30 and about 60 miles NNW of SLO we turned around because the cloud street we were on had a large blue patch and we wanted to guarantee making it back to SLO.  The flight back was generally pretty easy soaring with only minimal circling required, and with a tailwind, we were cruising at speeds of up to 100kts ground speed.

Once back near SLO we were able to find a especially high cloud that allowed us to tank up and climb to about 9500ft, and thus with this altitude, we were able to do a bit of sightseeing before landing back at KSBP.  We headed for Morro Bay and I was able to capture one of coolest photos I have taken from a glider of the Morro rock with the wing framing it from the side. 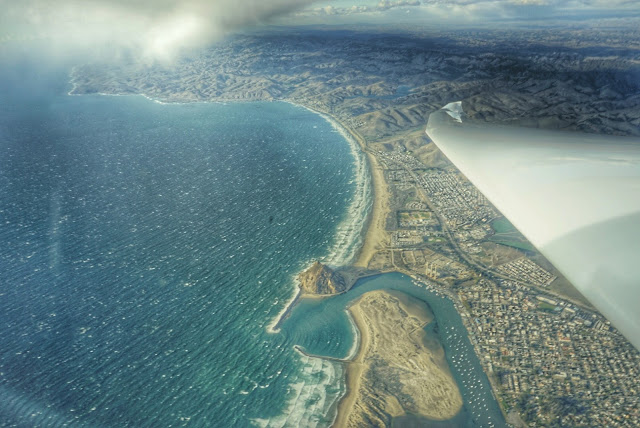 Still, at around 7000ft we cruised over  Los Osos as well as the Diablo Canion Power Plant before turning back towards SLO. 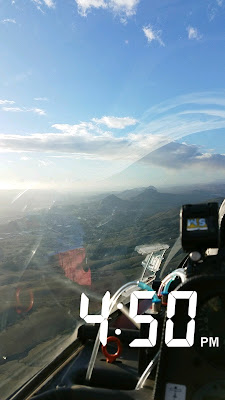 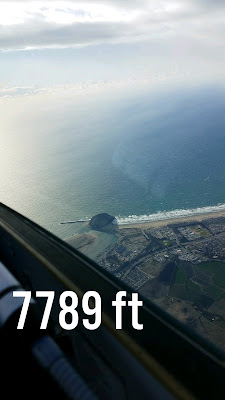 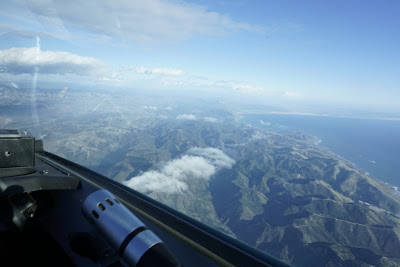 Before coming into land we went back to the convergence line to see if it was still working and sure enough it was. We got decent 1000ft climb out of it before calling to tower and beginning to get ready to land.  As the controller seemed to have not dealt with gliders much if at all Morgan explained the situation to him saying we would have to jump out of the glider to clear the runway but other then that it should be fine.  The controller was very cooperative and eventually just replied with "go ahead and do whatever you need to do, clear to land".

As we descended into KSBP we stopped for a few brief S-turns over the grade because when else are you going to ridge soar over SLO and then continued to land.  With winds 20kts down the runway the approach was not exactly easy but Morgan handled it with ease and we were able to roll to within 10 ft of taxiway Mike.  We then quickly jumped out of the glider and pushed off onto the taxiway.  With cold hands, and even colder feet, and 20kt+ winds disassembling the glider was a bit of a trick but after such a fun day of flying no one was in bad spirits.

I have to thank Morgan for inviting me on this incredible flight, I learned more about how to deal with different situations than I ever could in a classroom.

Also a big thanks to Neiman who crewed for us making this a cross-country flight, in every sense of the word, possible.