The wind was mostly calm, with just enough to make for a little bit of crosswind practice.  In the picture below, the flag in the background is limply pointing straight towards the windsock.  When I started walking out to take the picture, our windsock was showing a wind out of the south, and the flag was about half extended by a wind from the north-northeast. 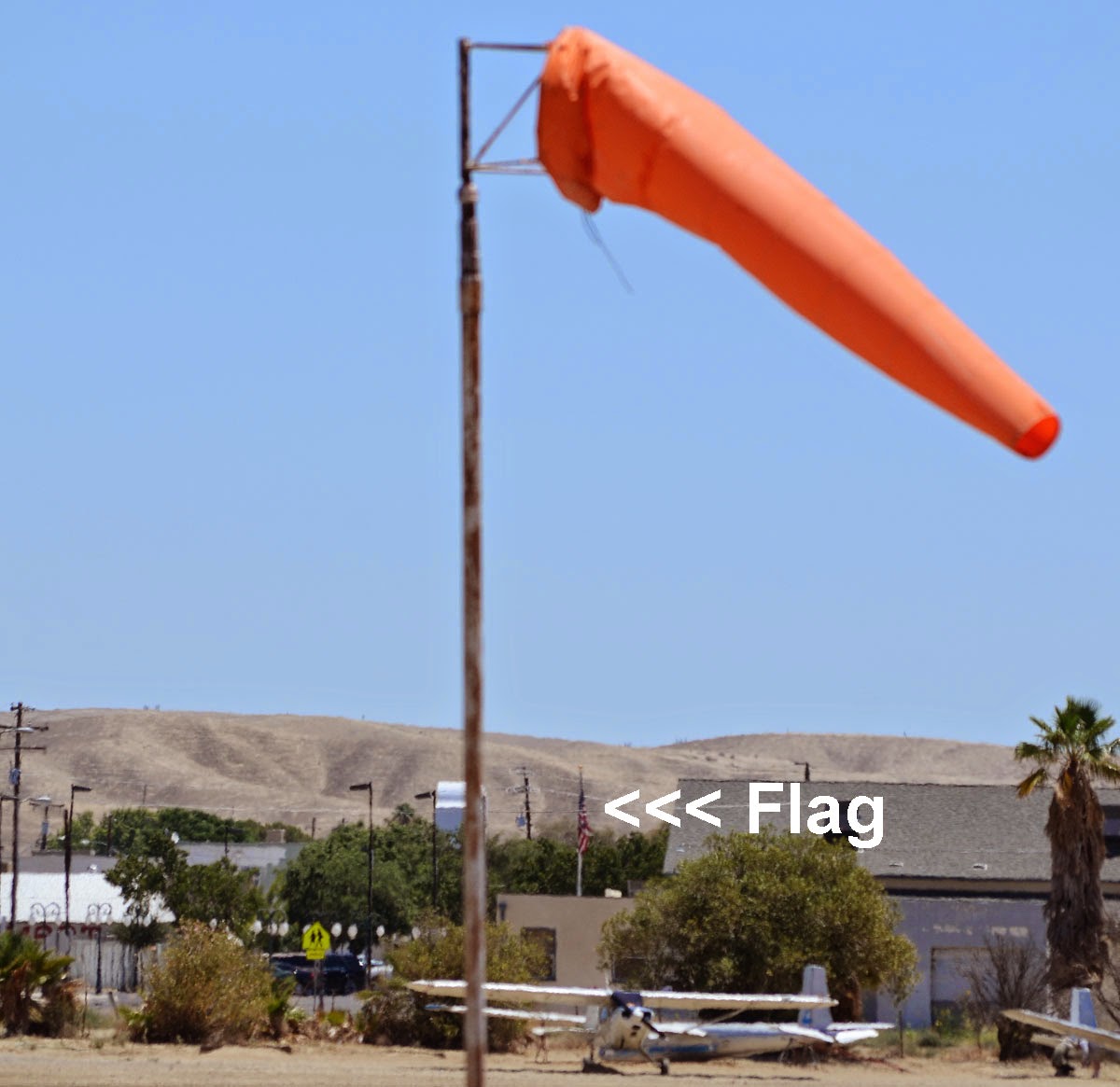 After spending a while inspecting Big Bird and making a list of things that need to be done, Jan Zanutto transforms into a tow pilot, until Andrew relieves him mid-afternoon. 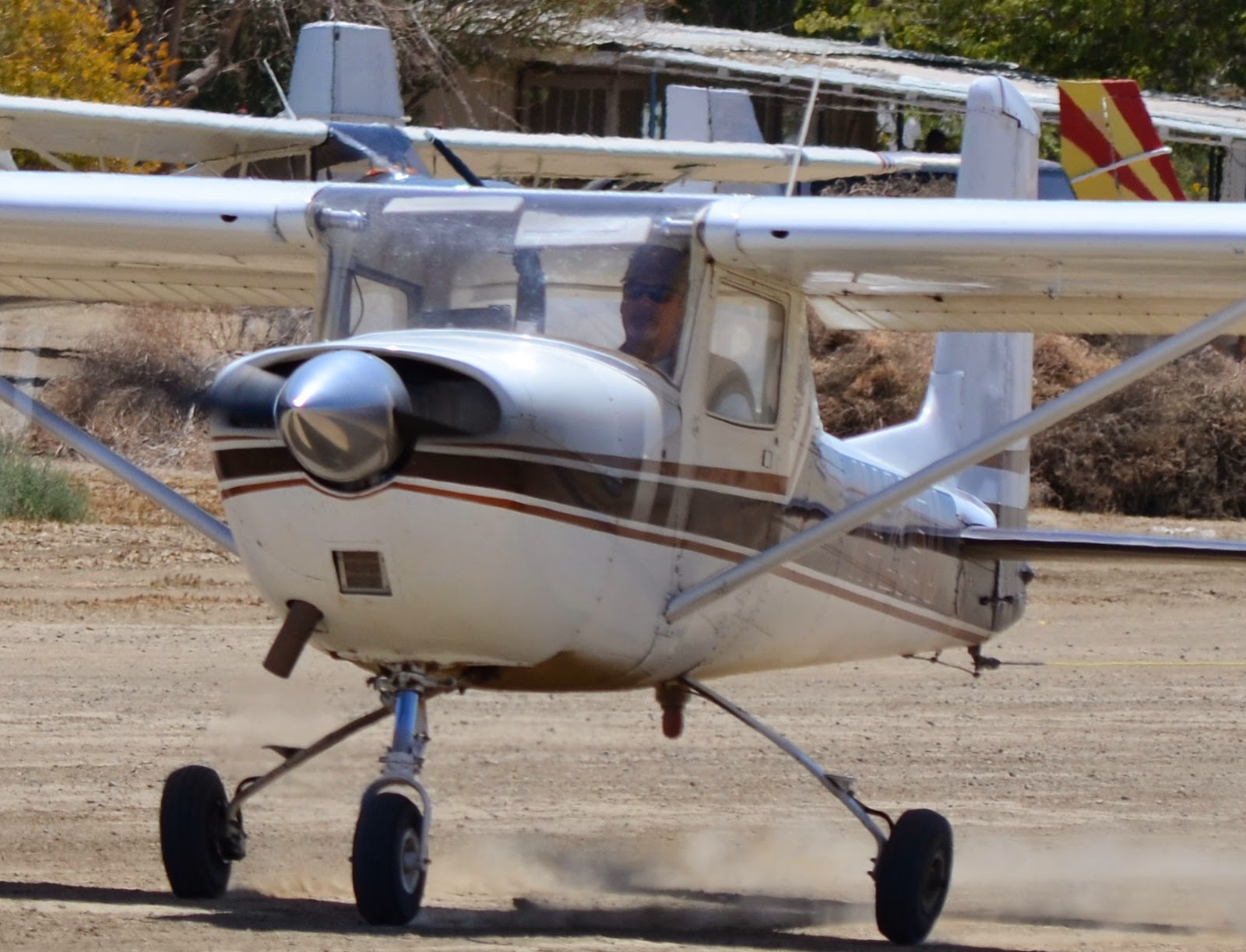 Chris Reilly wrote this report for his day:
Went up for 3 quick pattern flights, 2 of which were 350' rope breaks to land on 7.  Smooth air, great tows, and some nice clean runways made it a quick and fun event.  Got in a good spot landing/rollout competition with Craig as we switched in and out of Orange Crush for a few iterations.  Even with only one 2-33, we all made it work and everyone got a few good landings out of it!"

First glider flight with my new Contour HD cam, used the suction cup mount for the ol' over the shoulder angle.  Good way to debrief those landings.  Someone was out on the runway taking pics so hopefully those turned out great too. 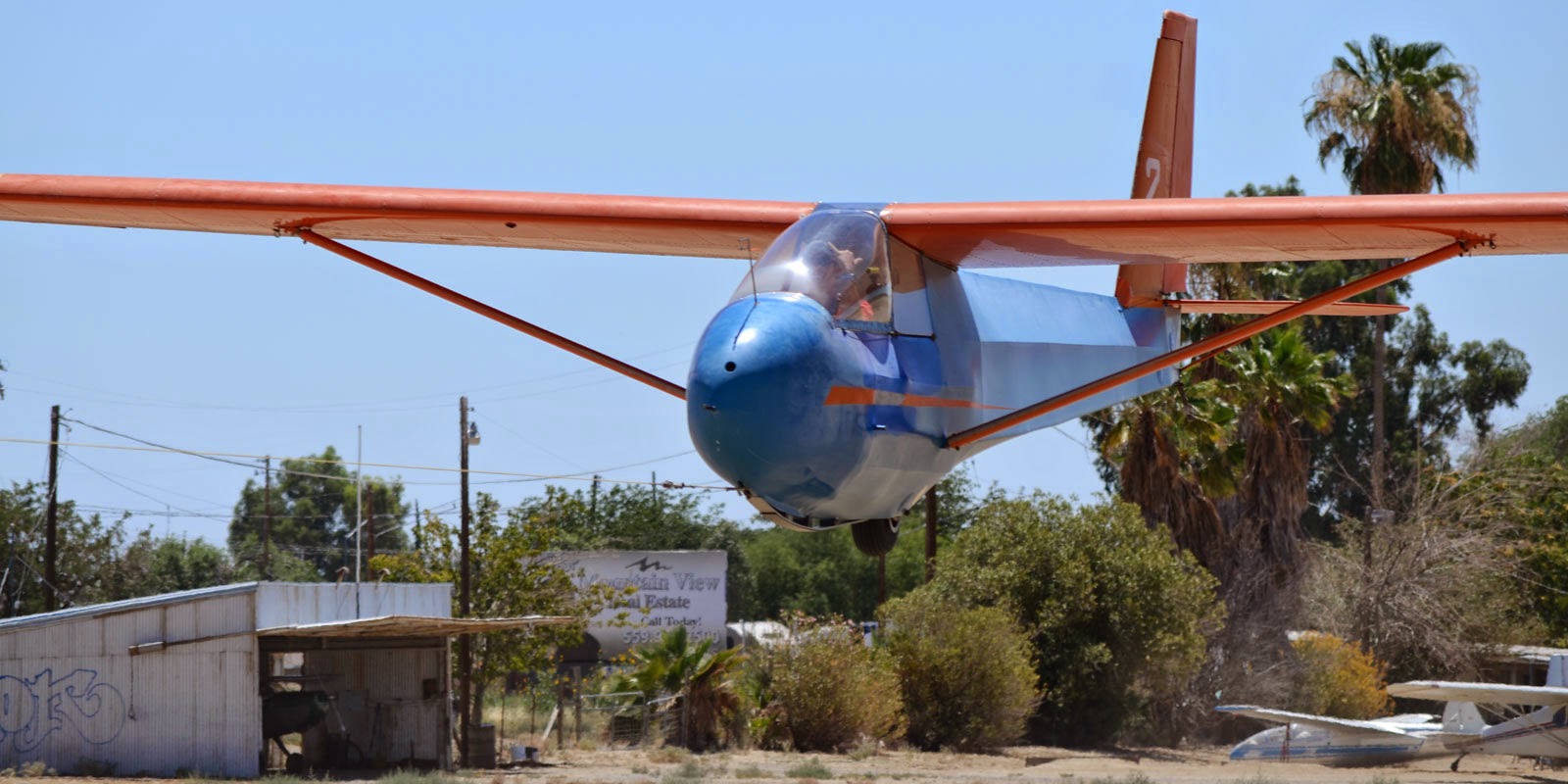 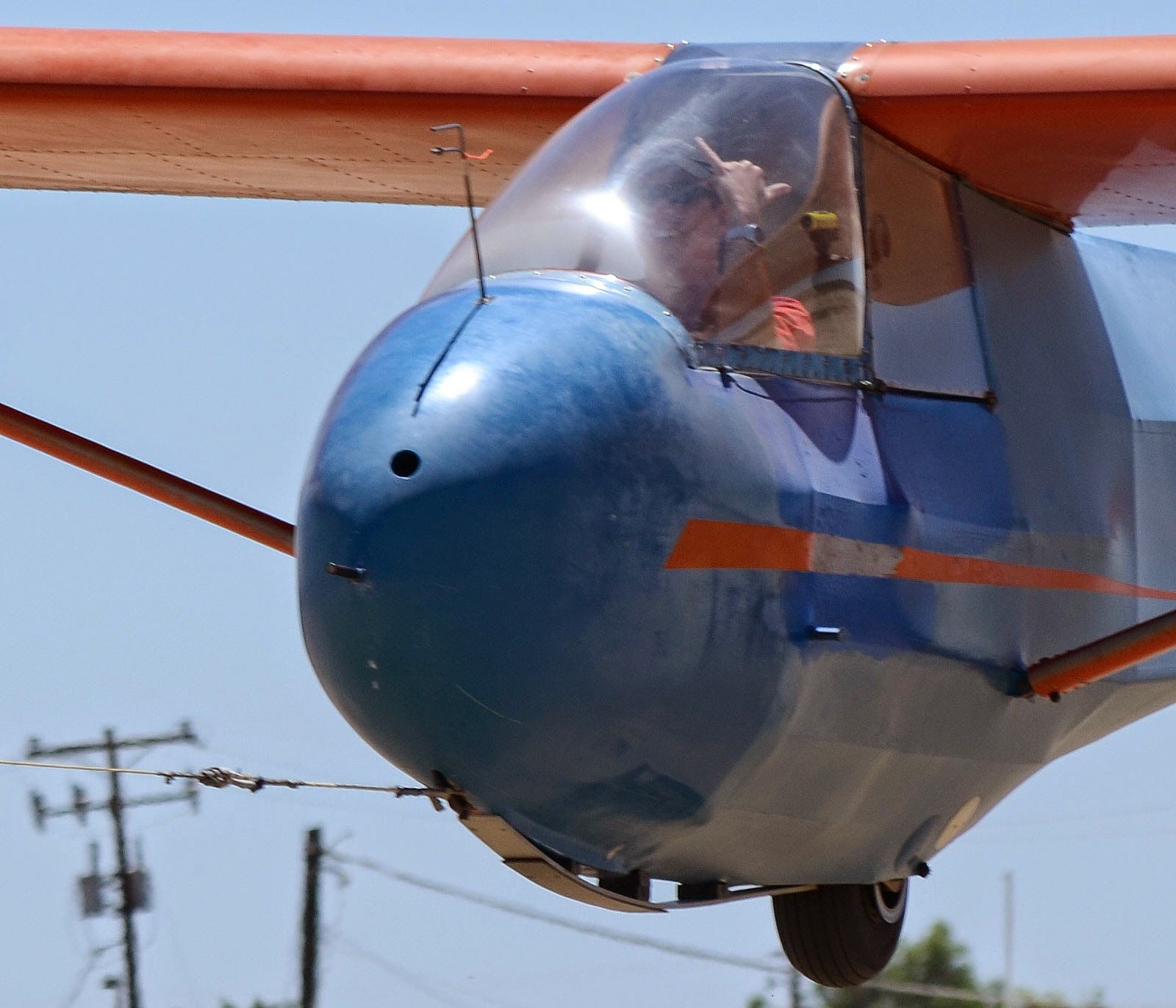 Coming in for another landing. 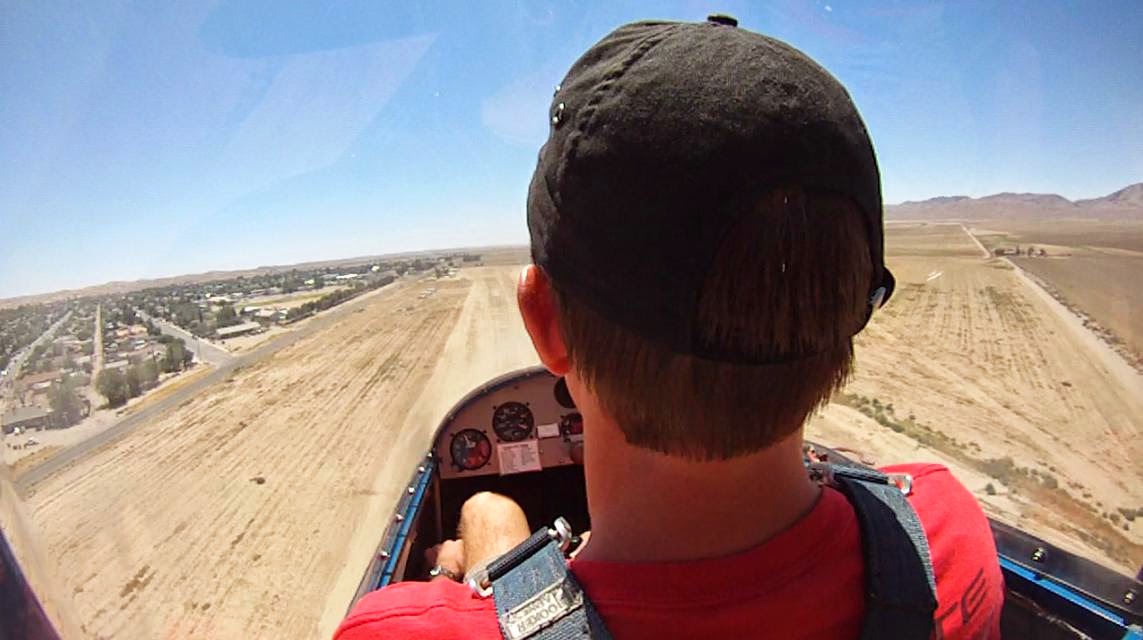 Craig Gifford is taking off in Orange Crush.  In the background you can spot Mike Paoli, Andrew Ouellet, and Yutaka Buto getting the 1:26 ready to fly. 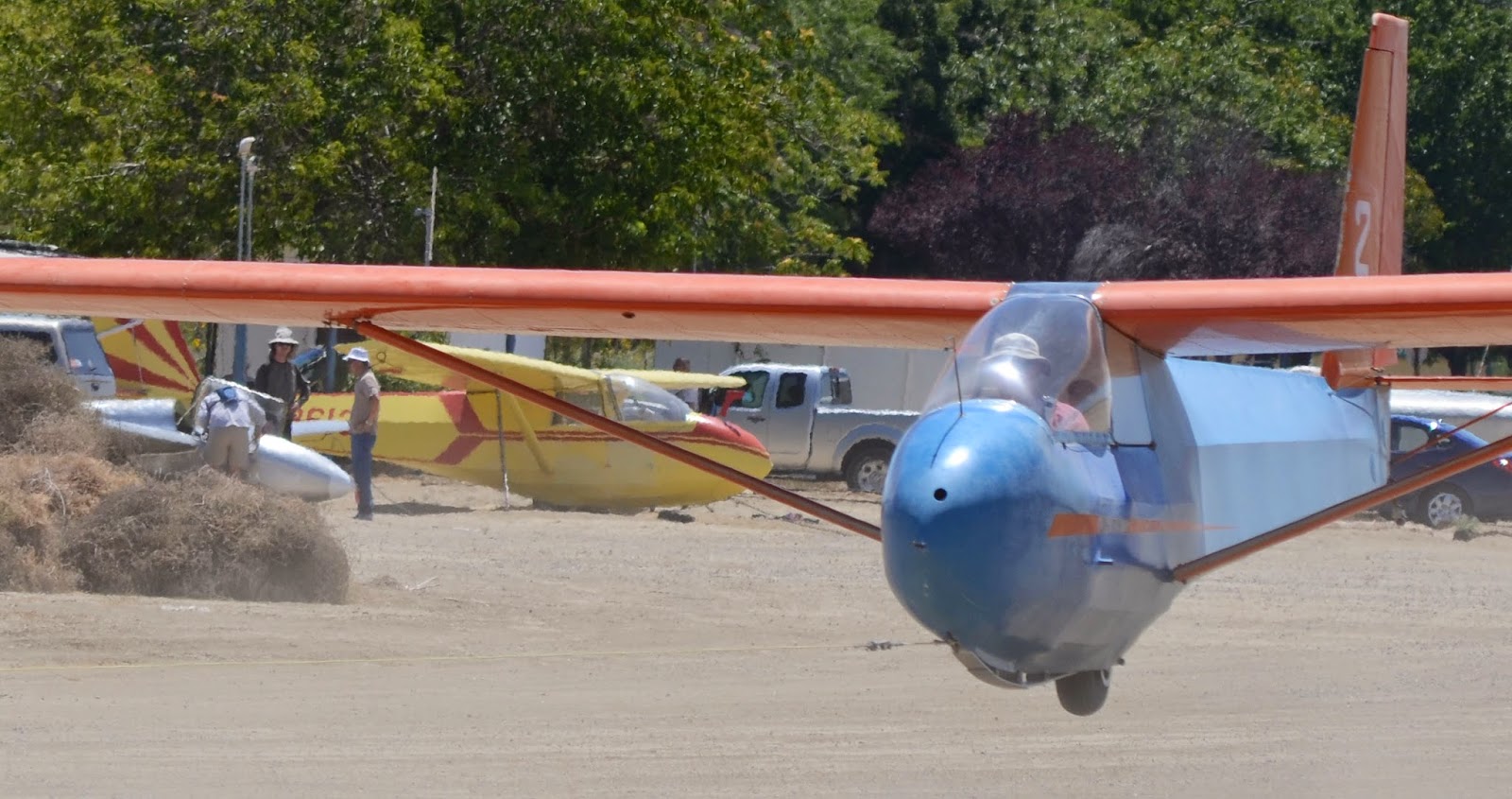 After Craig completed his morning flights in Orange Crush, Alex did a demo ride with John Nelson.  Alex writes:

"I flew in the Orange Crush with a young man, John Nelson, who came out with his Dad Mike and his Mom.  John is a member of the Civil Air Patrol, and also flies RC airplanes, currently an electric powered Cub with a 46 in. wingspan."
Alex continues, "We had a nice flight of about 30 min. We got just enough lift to climb a little after getting off tow at 2000 ft. AGL.  Then we were able to hang on for a while in zero sink just before entering the pattern.  John said he enjoyed it and will be back.  He was able to fly the 2-33 straight, make some gentle turns, and try changing airspeed by adjusting pitch attitude.  His Dad Mike grew up in Avenal and had his first flight with Bob Duvalt, who used to live at the airport.  His home was a mobile home that was on a concrete pad that still exists just to the south of our clubhouse along the barbed wire fence.  Mike used to lease the hangar our tow plane is now in, and used it for hopping up and working on various cars, his hobby at the time."

A little bit later, Andrew Ouellet gets checked out in the 1:26 and flies it for the first time.

Later, Jim Ricky and I flew for a 90 day currency endorsement and in preparation for his commercial pilot glider add on rating practical test.  We did two 2000 ft. tows and focused on boxing the wake.  We also got quite a bit of thermaling practice, which also helps for steep turns and coordination.  Jim is progressing towards adding the glider rating to his commercial (airplane) ticket soon.

In the photos, you can see that Jim has a great hat. It is ideal from the standpoint of protecting his ears, neck and face  from solar irradiation.   However, it does obscure the view for the instructor in the back seat.  Jim is flying great, so I really didn't have to worry about it much of the time.  However, I always like to get a little stick time myself back there, especially to practice in weak thermals.  I really wanted to be able to see the variometer, so with Jim's permission, we tied up the aft flap on his hat into a perky little bonnet like configuration.  My wife thinks  it looks real cute like that and maybe we should see if other glider pilots would want one just like it.  We could start mass producing them for sale.  What do you think?
--Alex Caldwell 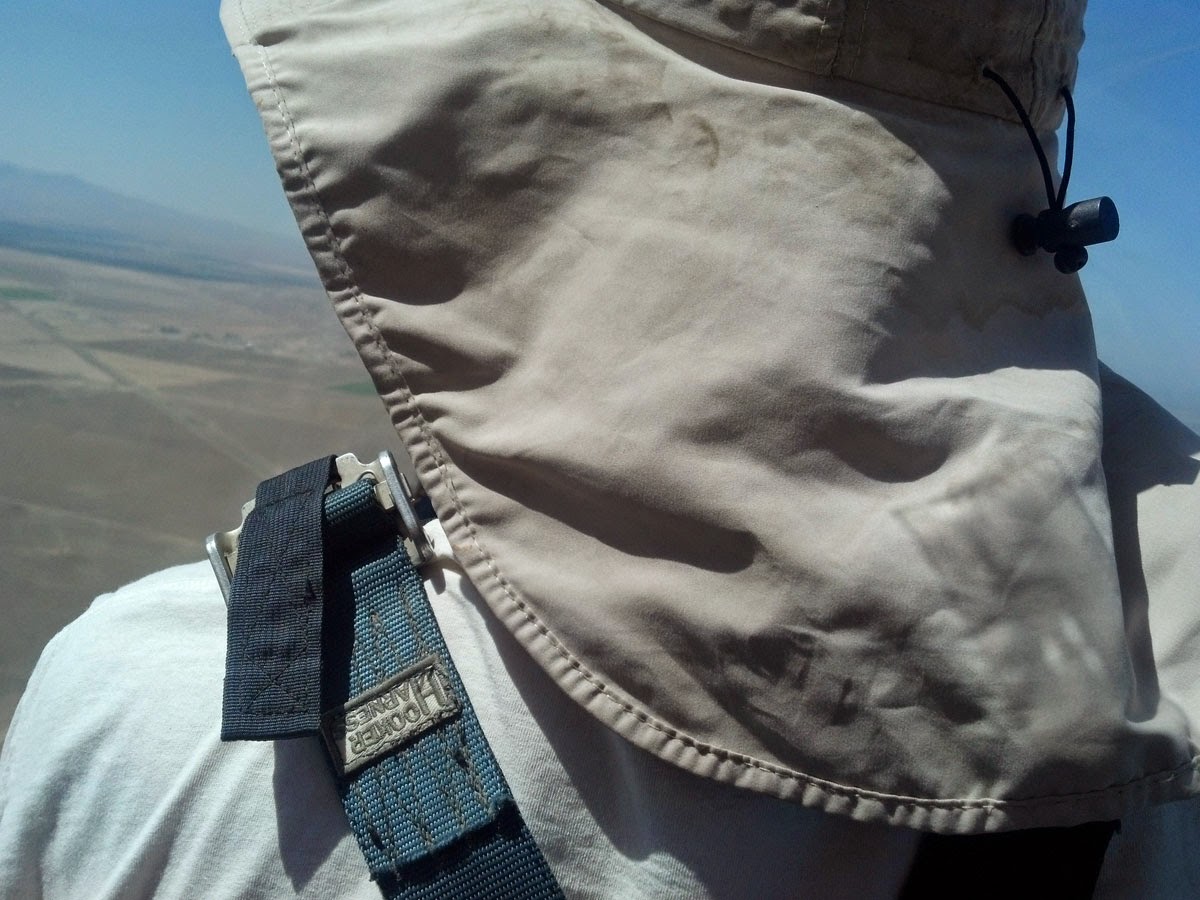 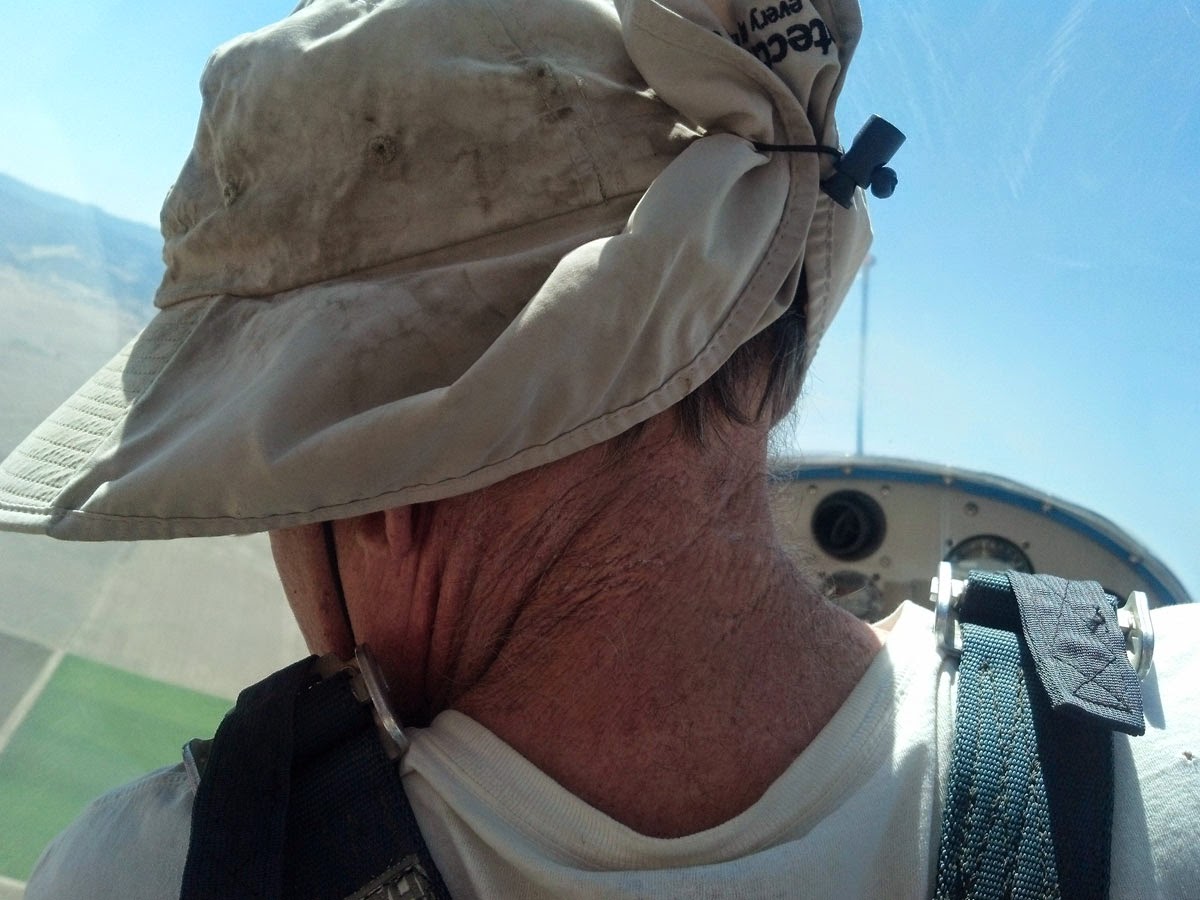 Jim responds; "I brought that hat to wear while working on the weeds.  I knew it would obstruct the instructor's view, so I also brought my regular hat, but I forgot to change it before the flight.  Maybe I could wear a sombrero for the checkride!"

I found some pretty good lift considering the hour.  On the first flight got about 900' above release height, until I just could not find enough lift to work

The second flight we had the plane for as long as we wanted, since Craig had told us he was getting in his air-conditioned Suburban to head home instead of flying after me.  However, I did not find more than brief periods of no sink, with an occasional bump from a little bit of lift.  Never found enough lift to soar.

Back on the ground after the flight, I noticed several dust devils, but they were all small and short-lived, with none of the dust devils I saw lasting a full minute.

Ethan finishes of today's blog with this account of his day:
No pictures today, but here are my highlights for the day, in bullets style:
Karl Kunz also got up in the air.  Here is Karl's OLC track.

Posted by Jim Rickey at 1:14 AM No comments: