WEATHER
Visibility: Unlimited
Wind: light, about 5 kts out of N. before noon, then came up to about 18 kts out of the NW later.
Altitudes: Tow release altitude was about all we could get
Time Aloft: 18-20 min.
Max Lift: a few patches of zero sink
Temperature: pleasant, a slight wind chill with the stronger afternoon wind
Comment: Sergio Grajeda Solos! Cal Poly Akafliegers fly and make fuel run.
Tow pilot: Jim Rickey (Thanks to Debbie for letting him come out!)
It was another beautiful Spring-like day at Avenal.  Some high cirrus clouds seemed to keep the heating down a bit in the morning, then it got a bit windier than yesterday. So overall,  it didn't seem quite as warm as it did yesterday.

The Cal Poly Akaflieg group including Neiman Walker,  Troy Wollman, Beth Hotchkiss and Tiffany arrived about 10:00 a.m. This was Tiffany's first time at Avenal.  Tow pilot Jim Rickey arrived shortly after that. Unfortunately, we had a bit of a communication/coordination problem arranging everything by email last night. The solo students from Cal Poly couldn't fly until an instructor got there,  and I had told Jim I would get there at 11:00. The word didn't get out to everyone, particularly the Cal Poly group.   Also,  I didn't actually get there until about 11:45.

There was thick fog from Tulare out to the LeMoore Tachi Palace Casino,  which necessitated going quite slowly for the first half of the drive. Troy Wollman was waiting when I got to Avenal and made a good solo flight in the 2-33. After that,  I was able to get one training flight in with Beth Hotchkiss.

Neiman had taken Morgan's Toyota truck to Harris Ranch for fuel with the fuel trailer, which had a flat tire, and the fuel cans. By the time he got back with the fuel, the Cal Poly group had to leave,  as they had an important meeting some of them needed to get back to in San Luis Obispo. So unfortunately,  Neiman and Tiffany never got to fly, for which I'm sorry! 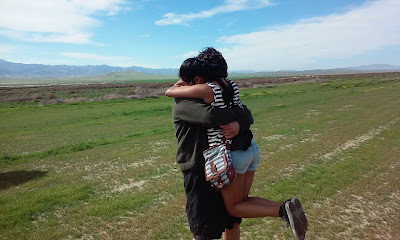 Sergio's girlfriend Dulce arrived just after he had taken off on his first solo. Her timing was perfect. She said she didn't want to make him nervous by being there while he was getting ready to fly, but she was there when he landed to surprise him and greet him enthusiastically.

Sergio Grajeda and I made one pattern tow  with a landing on runway 13, which he handled very well. Then I gave him a rope break from about 400 ft. AGL  to the west of the field. He handled it very well, entering a left base leg for runway 31 and making another very nice approach and landing. By then, the wind had come up enough that we were getting some loose dust lifting off the runway in places at times. However, the wind was almost directly down the runway, so it was actually helping our take-off performance, along with the cool conditions and relatively low density altitude compared to summer conditions.

Sergio and I made another flight, this time towing to 2000ft. AGL,  and getting off upwind of the airport. We circled a number of times while drifting downwind towards the IP,  and he made a perfect pattern and landing on runway 31.  He's been flying very well, and  I decided it was time to cut him loose for his first solo.

He didn't disappoint me,  and made two very nice solo flights. He towed to 2000ft AGL both times. The wind was probably about 15 kts, but it remained almost straight down the runway. He released and stayed upwind of the field. After entering the pattern, he  adjusted his base leg somewhat closer to the end of the runway than in no wind conditions, as we had practiced,  and made 2 excellent touch downs and landings on runway 31. His judgement of the flair, touchdown, rollouts were excellent. He came over the runway threshold at conservative heights,  but rolled out and stopped within about 1/3 the runway length or less. All in all, very good for his first solo flights! 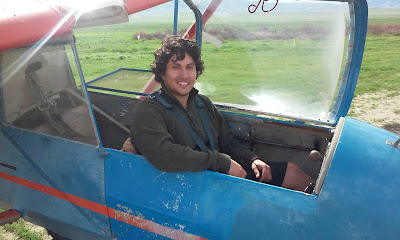 Sergio just prior to his first solo flight.  He's worked hard getting to this day. 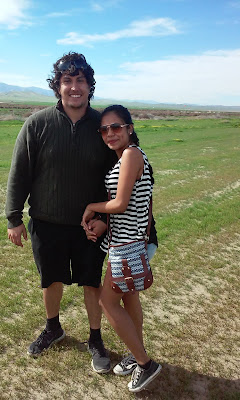 Without Dulce's help, Sergio wouldn't even have been able to be out at Avenal today! Is he ever a lucky guy! 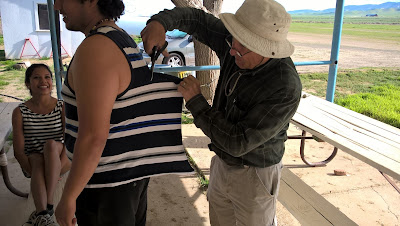 The traditional post-solo shirt cutting ceremony, which Dulce seemed to enjoy. I assured Sergio not to worry, that when he walked proudly, and with a slight swagger, down Avenal's main street with his shirt back removed,  that very soon,  he will see many other young men about town doing the same. Somehow, he didn't seem to believe me.

Posted by Alex Caldwell at 11:12 PM No comments:

WEATHER
Visibility: A bit hazy but still 30 miles
Wind: 3-5 kts from the NW early, a bit more brisk later on, from the North
Altitudes: Tow release altitudes
Time Aloft: About 40 minutes
Max Lift: A few saw up to 3 kts.
Temperature: High 70's
Comment: Operations back at wonderful Avenal. Yay!!
Tow pilot: Steel butt Frank Owen.
It was just a beautiful day at Avenal. And the grass is covering all the bare turf so it looks like we laid down synthetic turf. A nice covering, though, for St. Patrick's Day coming soon. But let's begin at the beginning. Yesterday Peter Mersino and I flew to Coalinga, where we met Harry Davies for the return of the tow plane and glider to Avenal. The transfer was easy and Harry got to do a bit of flying even after tow. So he enjoyed the transfer as much as Peter and I.

There was a lot of activity today, both in the south hangar working on Big Bird, as well as on the field where there were more than 16 tows, two powered aircraft visited, three high performance gliders launched as well as the hard-working Orange Crush. A new visitor lately, Matt Stelmas, started his return to flying gliders with several checkout flights with Dan Gudgel. And the hard working guys in the Big Bird hangar, Martin Caskey, Jim Rickey, Richard Walker, and Larry Johnson, all deserve a whole lot of credit because they could have been flying but chose instead to work on the last few items before the new launch of Big Bird.

Here is Harry Davies story of his short landout:


After a fun and exciting day of mostly gliding and a bit of soaring, I decided to write my first blog post for a flight. Normally, I’m not inclined to document a flight so publicly. In this case, however, the prospect of trusting Harold’s well-meaning but too-accurate version of events is sufficiently daunting to prompt a few words of my own.

I launched solo in the 2-33 for a 3k tow. The high work portion was uneventful, except to say that I used it as an opportunity to practice for my checkride. I’m happy to report (pay attention here Mr. Gudgel) that I was able to complete all of the maneuvers well within the Practical Test Standards (stop reading entirely here Mr. Gudgel).
The flight became interesting as I made my way back to the IP. At the IP, I noted two things in particular on the airfield. First, the windsock was showing a stiff wind out of the North. Second, I saw Yutaka Buto standing near the launch area anxiously awaiting the 2-33’s return, which prompted me to expedite operations. As I began my pattern for a runway 31 landing, I extended downwind to a 45-degree sight picture familiar to any power pilot. I then executed a textbook turn to base and final, perfectly meeting my target altitudes and airspeed.

At this point, I ran some calculus on my knee-board and determined my best course of action was to completely retract the dive brakes. I then contacted “Avenal Tower” and requested an elevator approach to a precision landing. It was approved as requested, so I began an expeditious descent. Accounting for a number of factors, my landing roll calculation made selecting a landing zone fairly trivial. I made my initial touchdown precisely 165 feet south of CA69 in calf-height grass. Adjusting my roll-out direction to avoid known obstacles, I was able to stop the main wheel of the 2-33 precisely on the property boundary.

As Harold photo-documented my accomplishment, Yutaka assisted me in pulling the 2-33 the short distance to the launch area. Before we knew it, the 2-33 was hooked up and on tow again. It was, easily, the shortest retrieve of the entire day. Additionally, the matted grass in the farmer’s field left a perfect trail for me to wander back and pick up my pride.

In all seriousness, I was fortunate that an unintended landout did not result in anything worse than a bruised ego. My sincerest thanks to the CalPoly Akafliegers for their cleanup work in recent weeks. Without a clear approach, my OAV (that’s Off Airport Vehicle, for those unfamiliar) ride could have been much less fun. Oh, and to quote Harold: “Never turn base past the end of the runway on a high wind day.” Lesson learned. I now humbly submit this flight for the consideration of the CCSC Awards Committee.

It was a fun day, everyone had something to do whether flying, towing, assembling the Big Bird, or just working around the field. There is always plenty of work to do, and with the wire buried, the front gate is now useful and preferable instead of going around the towplane hangar to arrive or exit.

See you all next week,

Harold Gallagher
Posted by Unknown at 6:17 PM No comments: