Sergio and Alex made two flights in the Orange Crush on
Saturday. It looked like a poor flying  day in the morning. Some folks,
who were thinking of coming out,  cancelled before making the long drive,
due to the weatherforecast. The Avenal RASP forecast indicated possible precipitation right
over the airport between 1:00 p.m. and 3:00p.m. On my way out to
the airport, it was raining lightly as I came over the Kettleman Hills. I did
not think we would do any flying, but Sergio Grajeda has been working on
ground school studies in anticipation of soloing soon, so I decided to
continue out to the airport,  go over his pre-solo written test and continue
with some ground school topics with him. 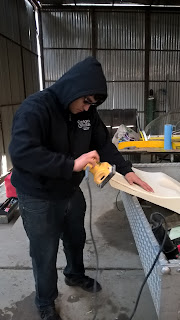 Stalwarts Jim Rickey and Sergio worked in the morning on
Big Bird in the south hangar. Sergio was also anxious to fly, as he had not been
up in a month,  and was very close to soloing on his latest flights back in December.
The runway conditions were OK for operations. There was a slight softness south of
the clubhouse, but no mud or standing water etc.  The wind was out of the SW, favoring
runway 13. The runway was drier on that end. Jim drove the length of the runway to check
it's condition.

Sergio and I started working on his pre-solo written test at the clubhouse. The three of us then
broke for lunch at the Gallery restaurant in town. They have both Mexican and U.S. cuisine.
Their hamburgers are very good,  and you can enjoy the locally produced art work on
display. Sergio vouched for the place, as he is a former employee there.
We continued the pre-solo test at the restaurant,  and had finished it by the time were done
with lunch. Arriving  back at the field, it appeared that the forecast of rain was not going
to happen.  There was a solid overcast, but with quite thin areas. Black Mountain was obscured by clouds
and it appeared there might be some light precip. up there,  but it never approached the field. Radar views obtained over the Internet showed some light returns on the coast side of the mountains,  but nothing signficant  appeared to be approaching Avenal, so we decided to pre-flight and then  tow the Orange Crush out to runway 13, with Jim agreeing to tow. 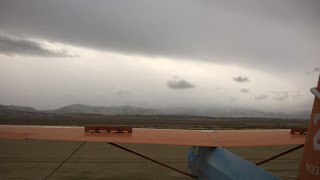 Lenticular,  and maybe some rotor clouds prior to flying.

Sergio and I made two flights to 2000 ft. AGL. We saw clouds that appeared to be
wave clouds to the West, just downwind of the Ridge near Tar Canyon. There also appeared
to be some cumuliform,  probable rotor cloud,  underneath what looked to be a lenticular at times.
The wind on the ground was from the SW varying from 5 - 12 kts., providing a right cross wind on take off and landing on runway 13.  Sergio handled the cross wind very well on take-off and landing  on both flights,
even though we did not have a wing runner.   On the first flight, we saw the suspected wave cloud
to the West, but did not tow far enough in that direction to get under it. But we did encounter some
weak lift just North of the field while low,  that we thought might be signs of a  secondary wave in a well known area for that prior to entering a right hand pattern for runway 13. 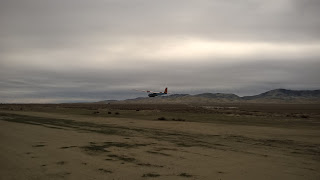 On the next flight, we decided to ask to be towed further west and release
under the lenticular-looking cloud just downwind of the ridge. It was further out from the field,  but
upwind. The wind seemed quite a bit stronger at tow release altitude than it had on the ground at Avenal, often a favorable sign when looking for wave. On tow,  we felt like we were encountering some mild rotor like turbulence under the lenticular cloud, and got some lift where we were climbing at 6 kts on tow. We got off just upwind of this area,  and after releasing, had some zero sink in smooth air that we thought was wave, but were not able to  really climb. So,  we decided we better head back to the field,  in case we encountered the down part of the wave on the way back. When we got over the eastern edge  of the Kreyenhagen Hills, just SW of where the old tank was, we encountered some more lift. Suspect it was weak rotor, as it was not smooth,  but we were able to climb at 1.5kts for a while. The cloudbase was fairly  low, probably about 3800ft MSL,  and it was a complete overcast, with Black Mtn.  being obscured. We again decided to head back for the field. We didn't encounter any more lift, and concentrated on making a good pattern and landing, rather than trying to find the secondary wave etc.  I believe someone flying a high performance glider would have been able to have a sustainable wave flight today, although the solid  overcast would have limited the altitude attainable. 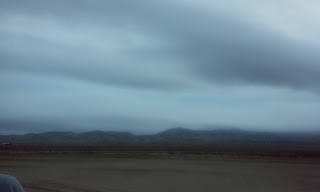 Lenticular-like clouds. Looking SW  towards Tar Canyon at the end of the day.

After flying, Jim worked even longer on the tow plane. It had been decided amongst our mechanics, that
the carburetor and the magnetos would be removed, inspected and overhauled prior to further towing. Jim
worked very hard to get it all done, and had the items on the bench just before we lost the day's available natural lighting. Thanks Jim! 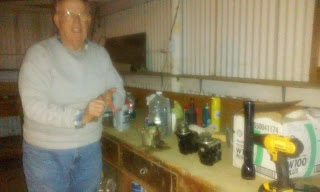 Posted by Alex Caldwell at 6:17 PM No comments:

WEATHER
Visibility: More than 30 miles
Wind: Light and variable from the northwest
Altitudes: Tow altitudes only
Time Aloft: 20 minutes plus or minus
Max Lift: 50 fpm when you could find it.
Temperature: Mid 70's
Comment: Cal Poly students made up most of the activity.
Tow pilot: Jim Rickey and Harold Gallagher
Click on the photos for larger sizes of all photos.

It wasn't much of an operations day but the Cal Poly students made it fun. While Jim Rickey and his help worked on Big Bird, there were a few training flights. First up was Clark Woolf who continues to develop a good set of flight skills. Today he was rusty from not flying for a few weeks and he recognized how that kind of a layoff can affect one's skills. But by the end of the second flight he had regained what he had lost during the past weeks. His progress is excellent and there is no doubt he'll solo on his 14th birthday.

The Cal Poly students were out in force, totaling eight, with one new member added. Beth Hotchkiss joined the club today and we welcome her as part of that great group of students from San Luis Obispo. Richard Walker took her for a first ride while I did the towing when I could. Jim Rickey filled in when there was no other alternative and I appreciated his help. The only student who elected to take a training flight was Andrew Palmer who is working diligently toward his solo flight. He will solo soon enough as I notice his skills getting better and his decision making is right on target.

It was a good day for the students who dominated use of the Orange Crush and had no competition for it during the day.

Posted by Unknown at 3:01 PM No comments: