WEATHER Nice spring-like conditions
Visibility: Hazy, some scraggly cus appeared along a weak convergence line, which stayed close to the field most of the afternoon.
Wind: Very light out of the Southeast and East.
Altitudes: 3000 AGL on tow, about 2800 MSL in soaring flight.
Time Aloft: 45 minutes
Max Lift: 2 kts. steady, occasional 3 kts.
Temperature: about 70 deg. F.
Comment: Nice spring-like day. A weak convergence line was almost stationary during the afternoon over,  and just to the west of the field,  marked by some cus. This enabled soaring flights by the 1-26 and the Orange Crush. In the Orange Crush, we did best by just flying straight along the clouds marking the convergence line, rather than stopping to circle. We made 2 round trip runs from North of the field down  to the prison and back, and gained about 600ft in the process.
Tow pilots: Dan Gudgel,  Harry Davies, Harold Gallagher
Donuts: Craig Gifford
Coffee brewed by: Alex Caldwell (didn't drink any).
Craig Gifford flies the 1-26
Craig made a great first take off, tow and landing in the 1-26. This video shows the landing.  If you listen closely, you can hear what it sounds like when a wheel bearing has gone out!  There's also  something not quite right about my camera's exposure setting. 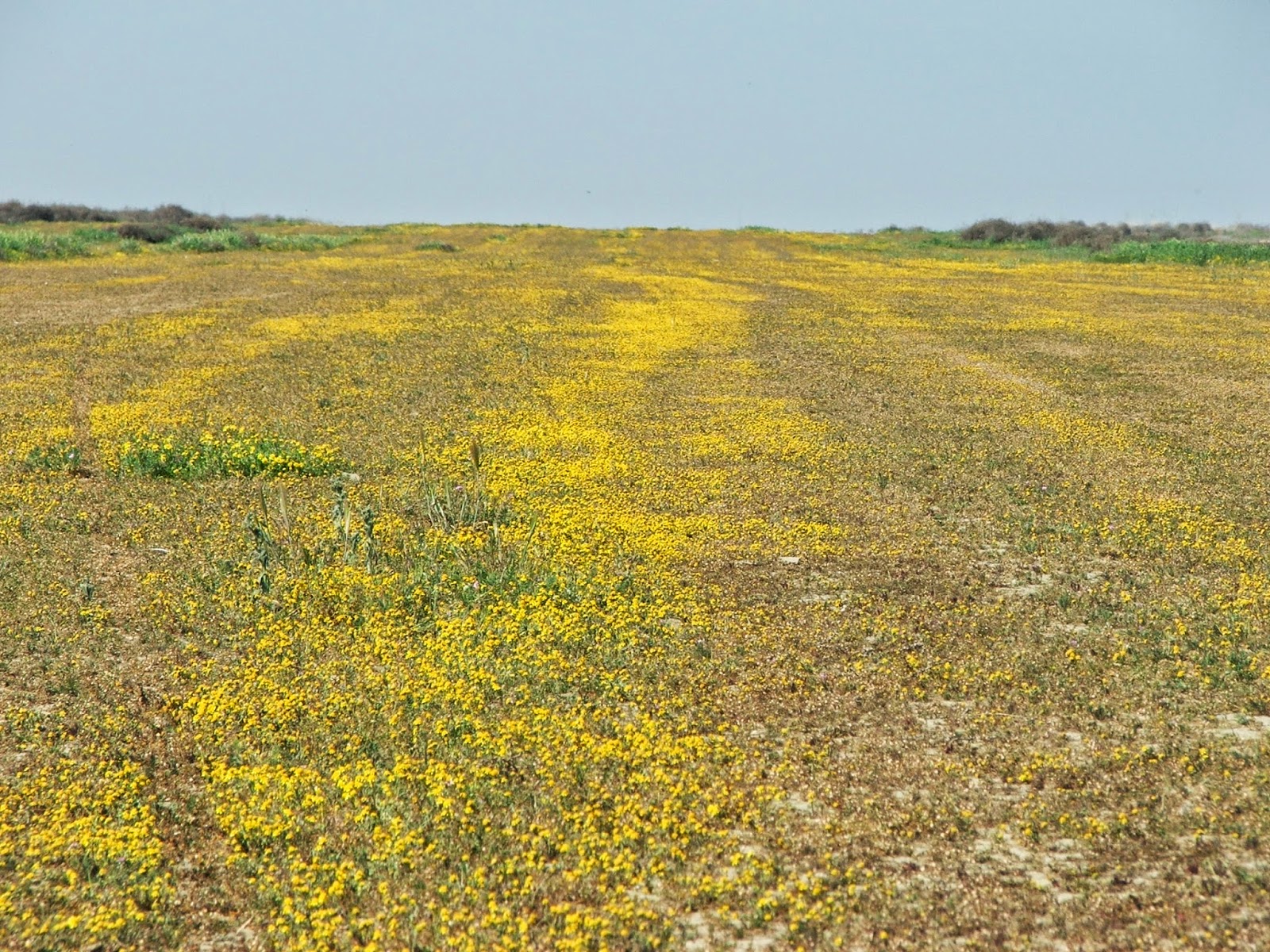 Enjoy it while it lasts! Photo by Harold and Dan. 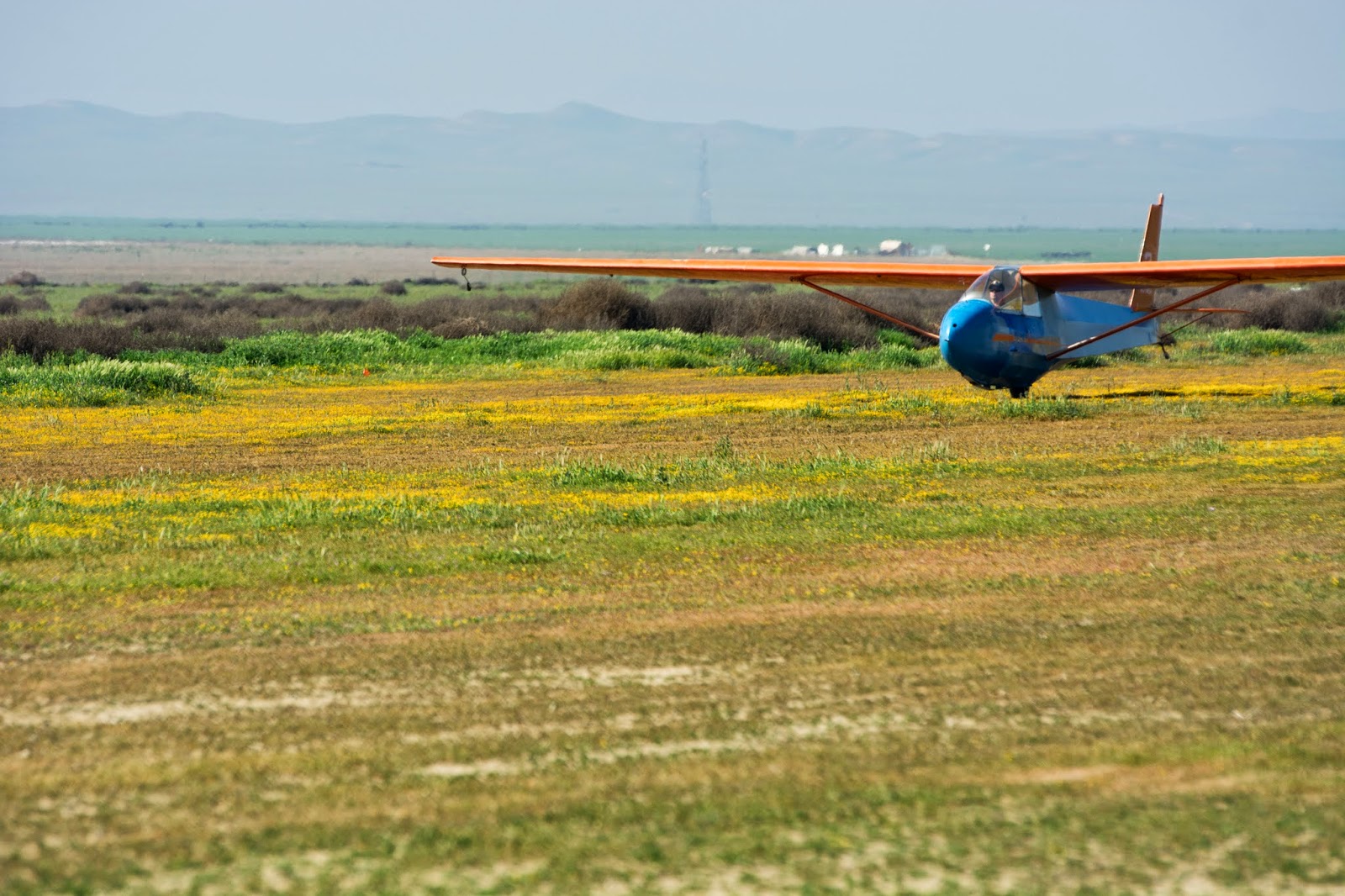 If only it stayed like this all year long! Photo by Skip Breidbach. 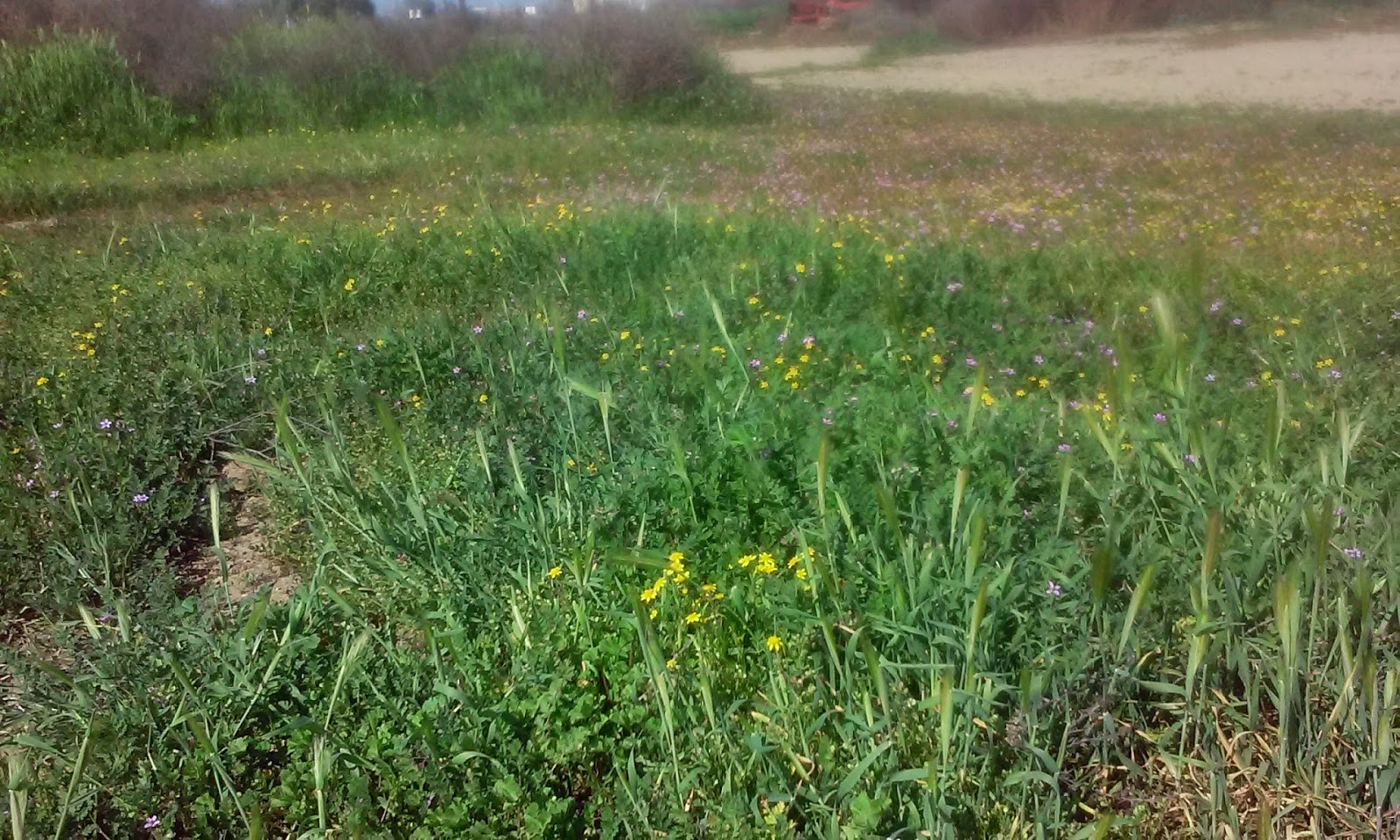 Spring is almost here! We have some yellow flowers and some blue ones, species unkown. 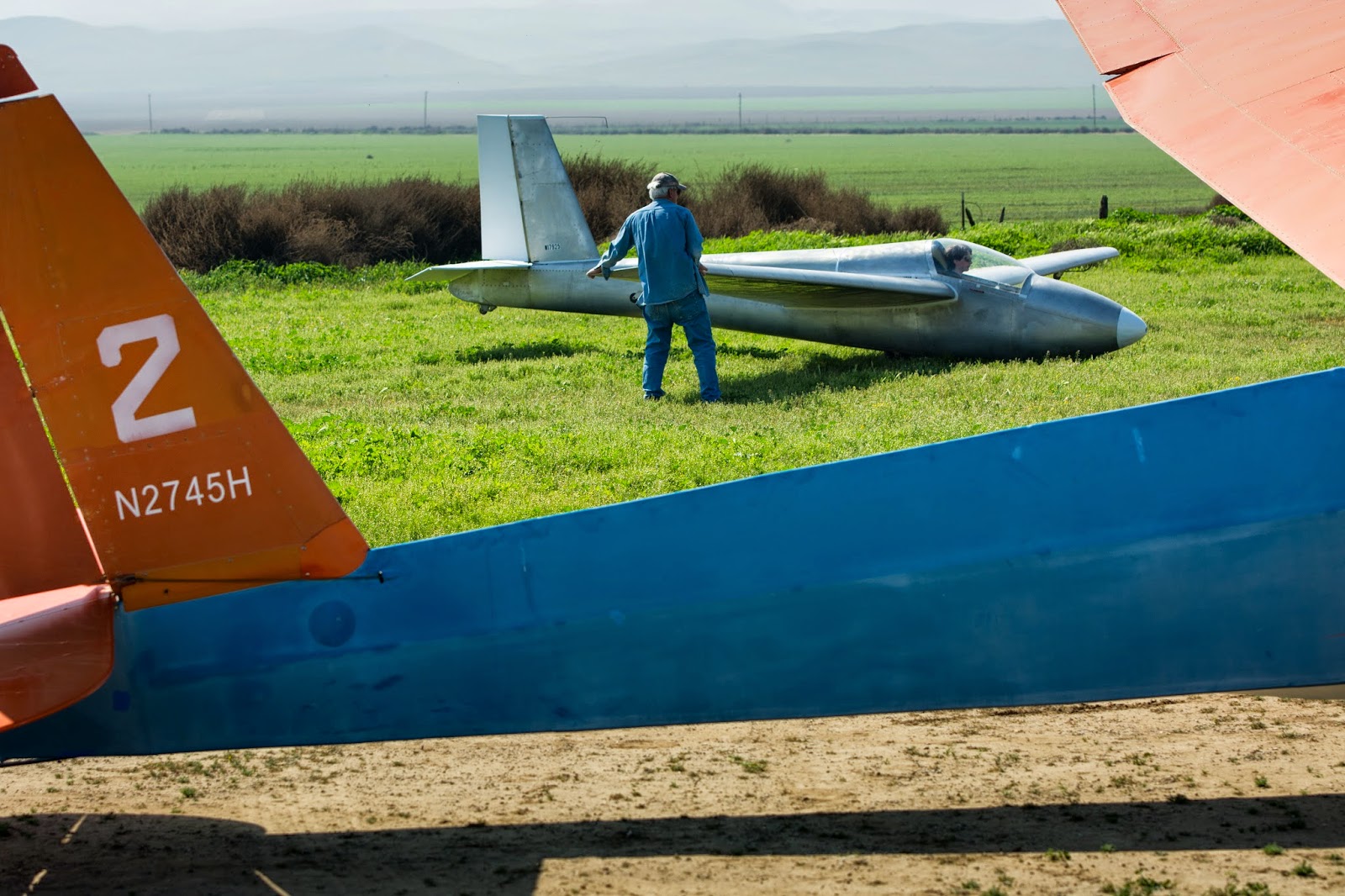 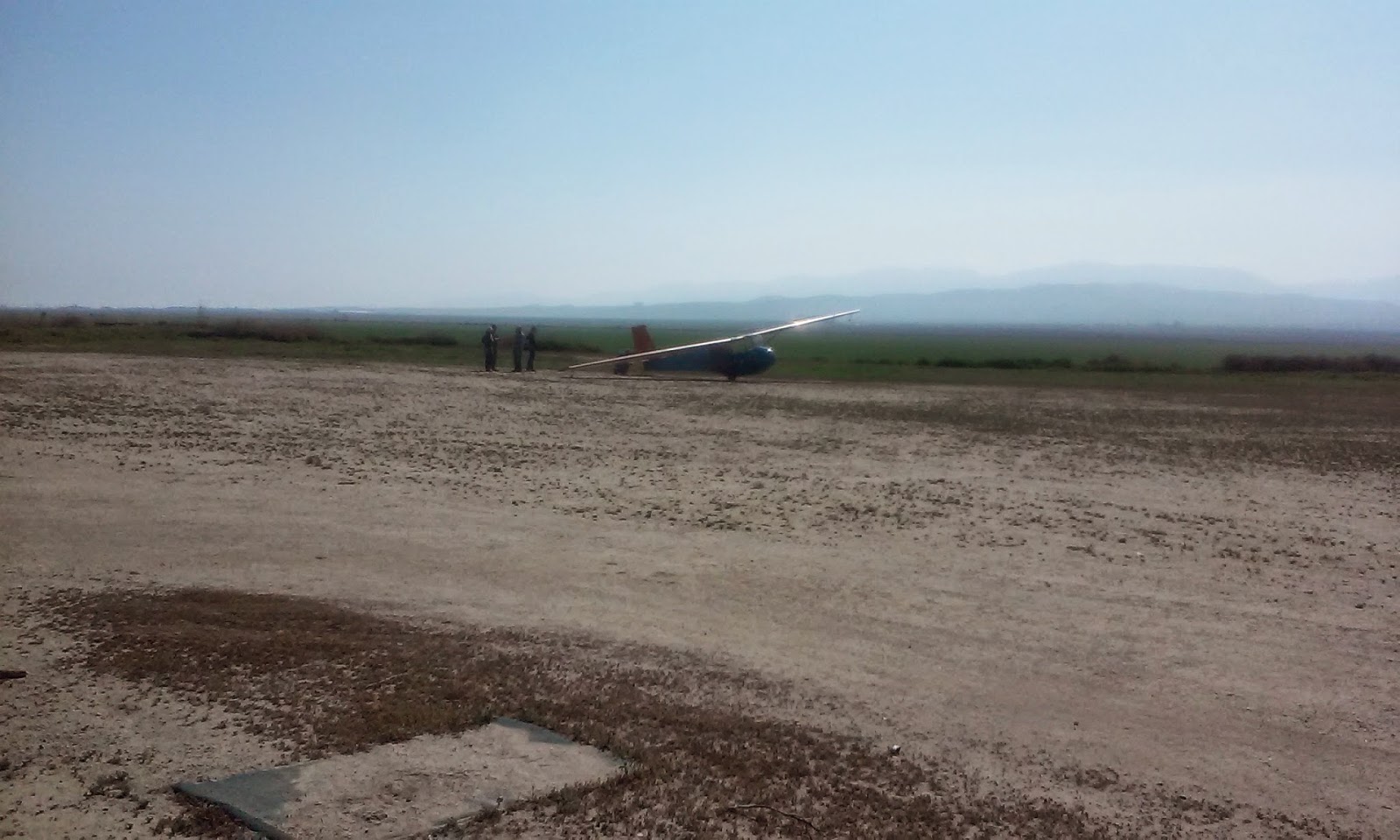 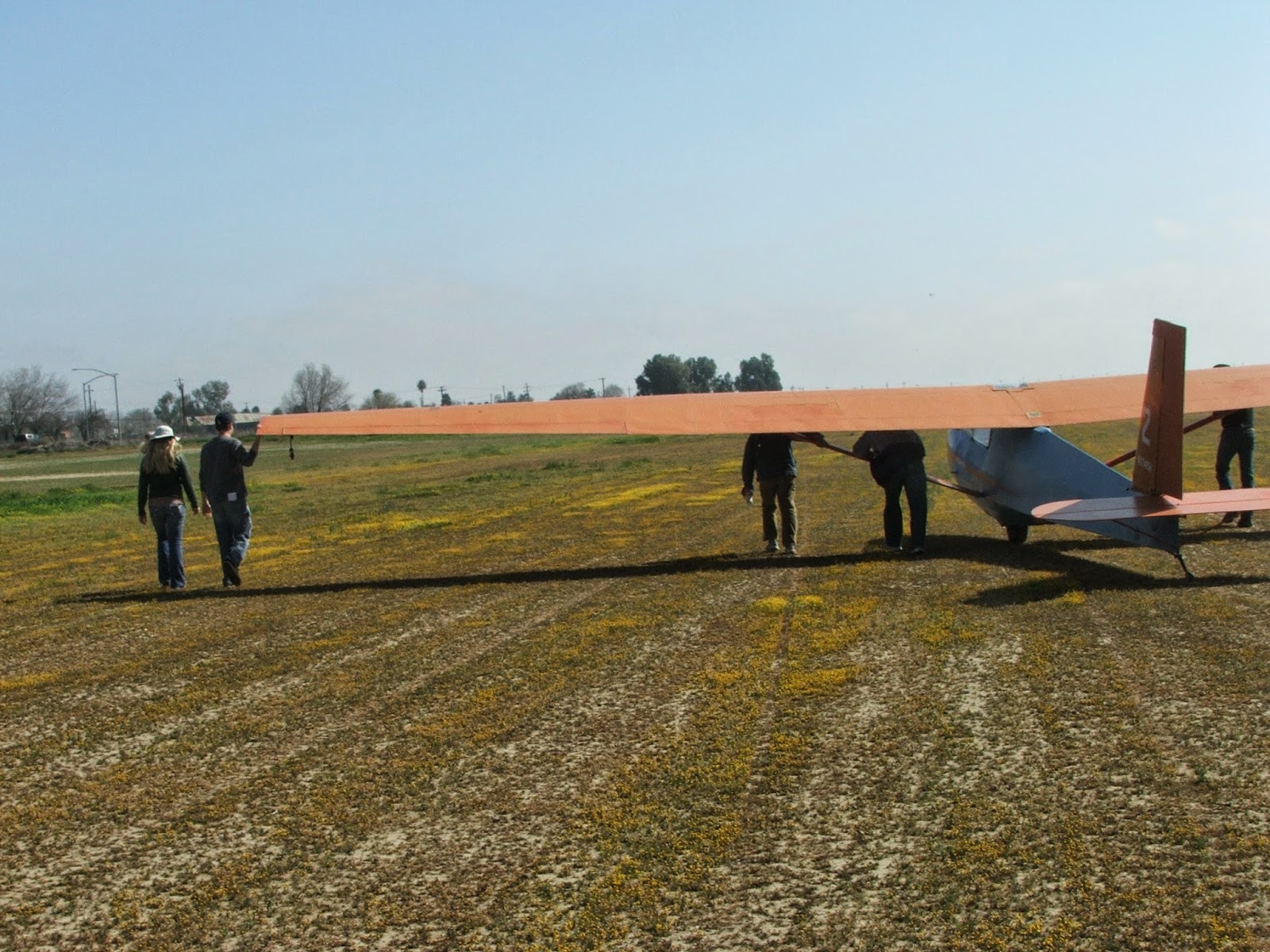 It was warm and sunny at Avenal. Very  nice weather,  compared to the fog in the Central Valley. Martin Caskey's good friend  Dennis came over, and told us it was foggy at Paso Robles also, so he had to drive out instead of his usual mode of transport - flying his Piper tail-dragger,  poor guy! 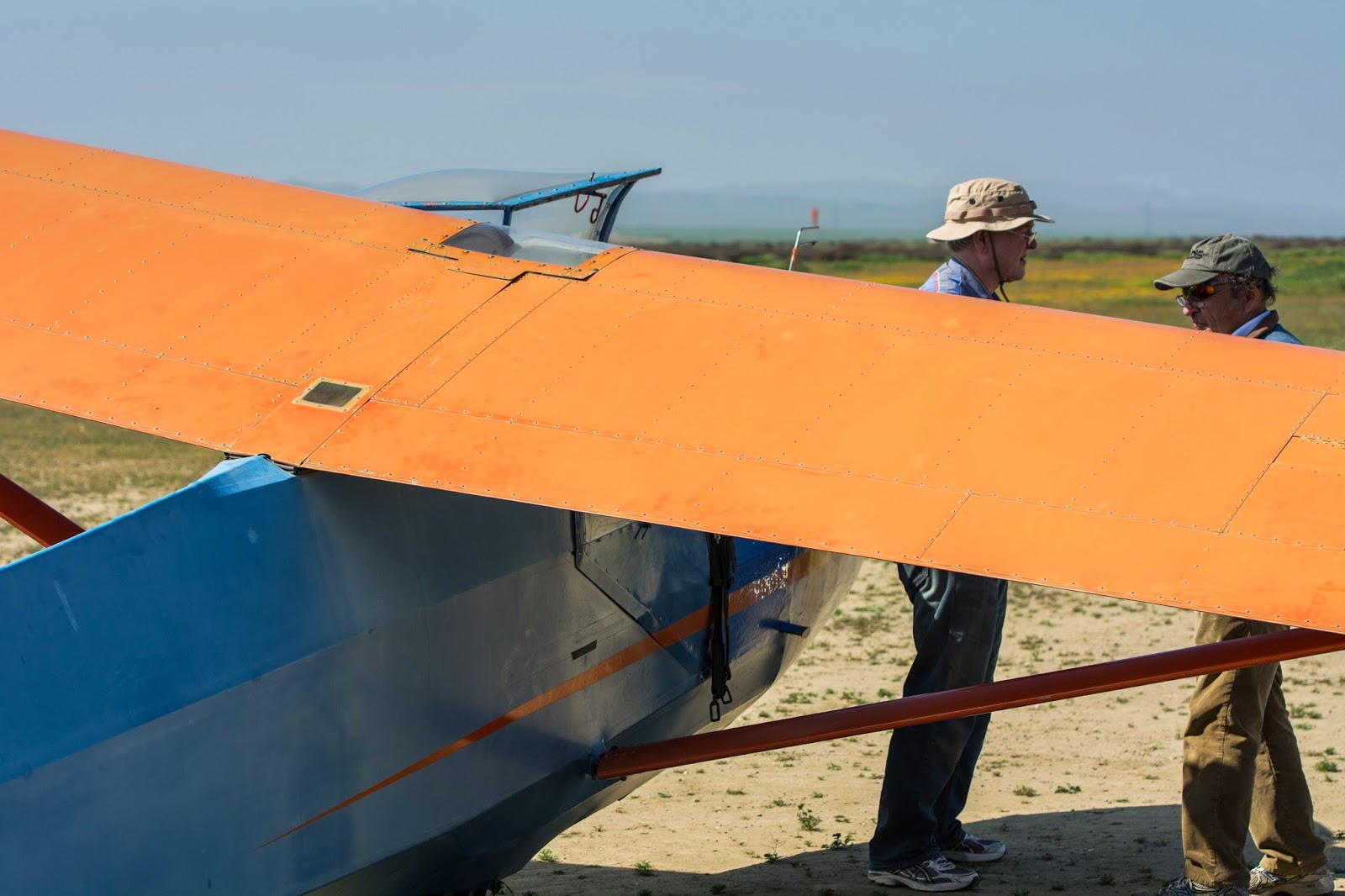 Craig Gifford flew with Alex in Orange Crush to knock the rust off  after a winter lay-off following his win of the coveted "Iron Butt" award last year. Photo by Skip Breidbach. 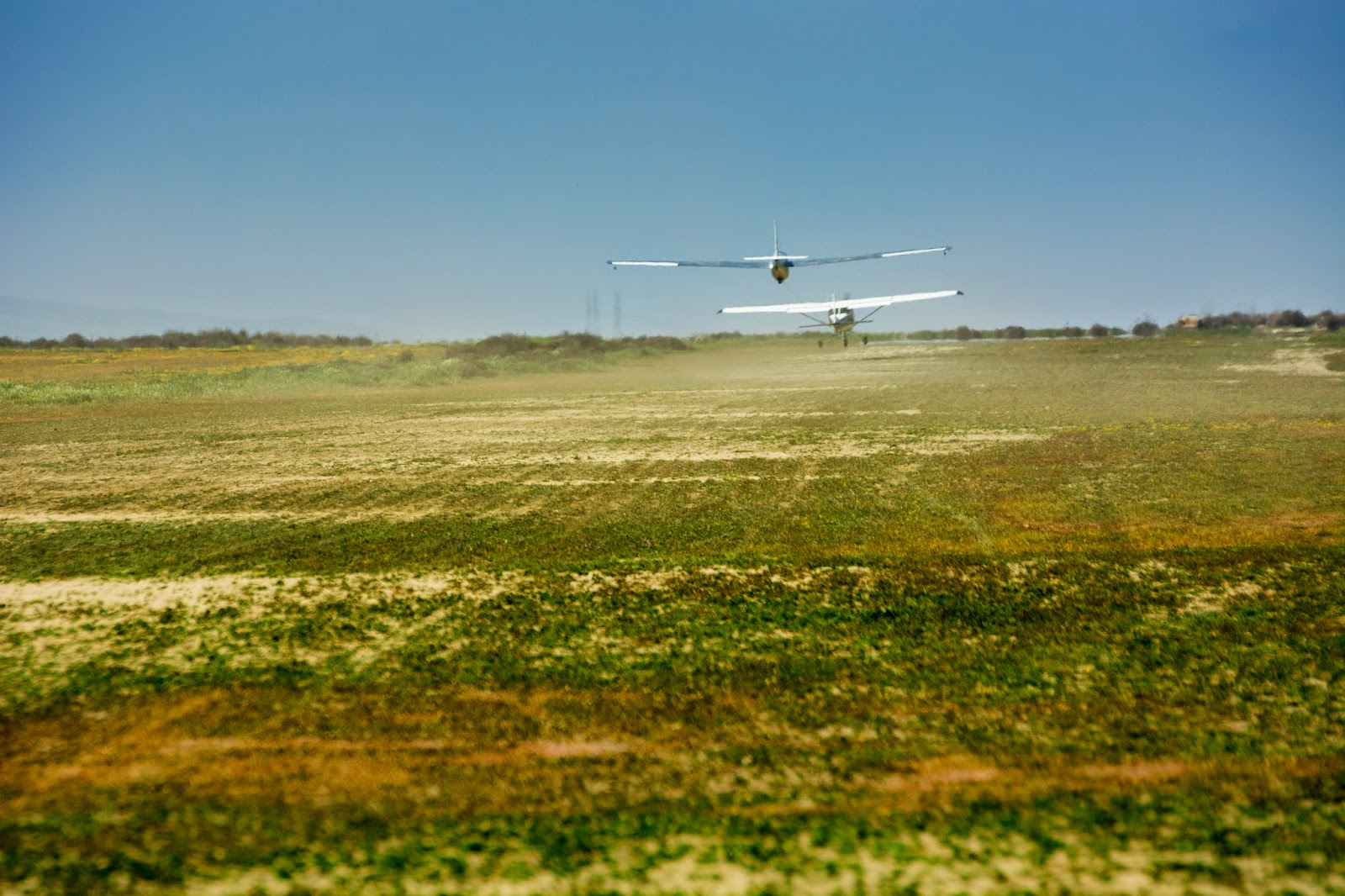 Either Andy, Tyler or Craig taking off in the 1-26. Photo by Skip Breidbach. 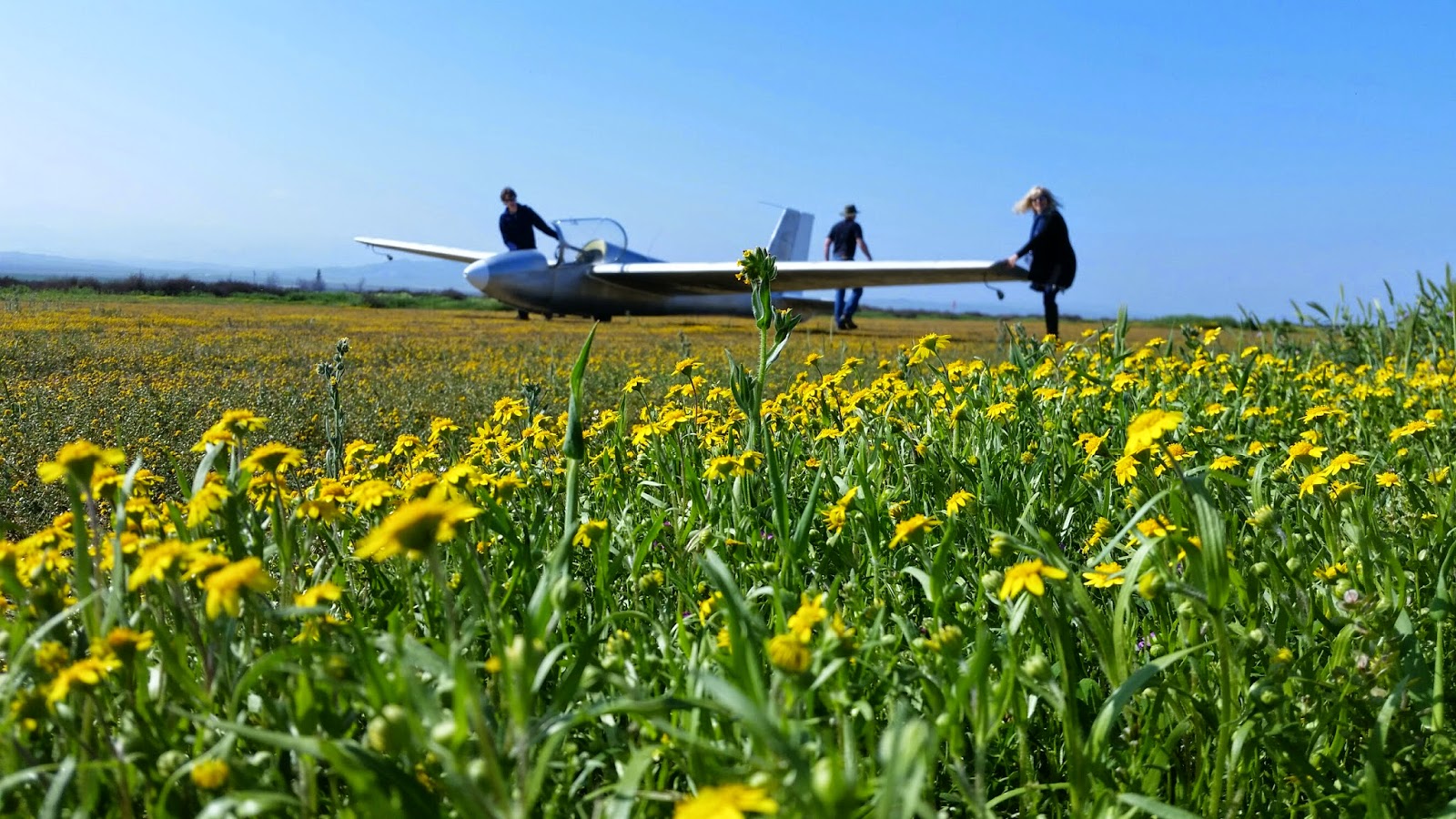 Tyler Bishop moving the 1-26 back to take-off area after his landing. He was able to stay up for some time in the convergence, flying with the Orange Crush. Photo by Andy Reistetter. 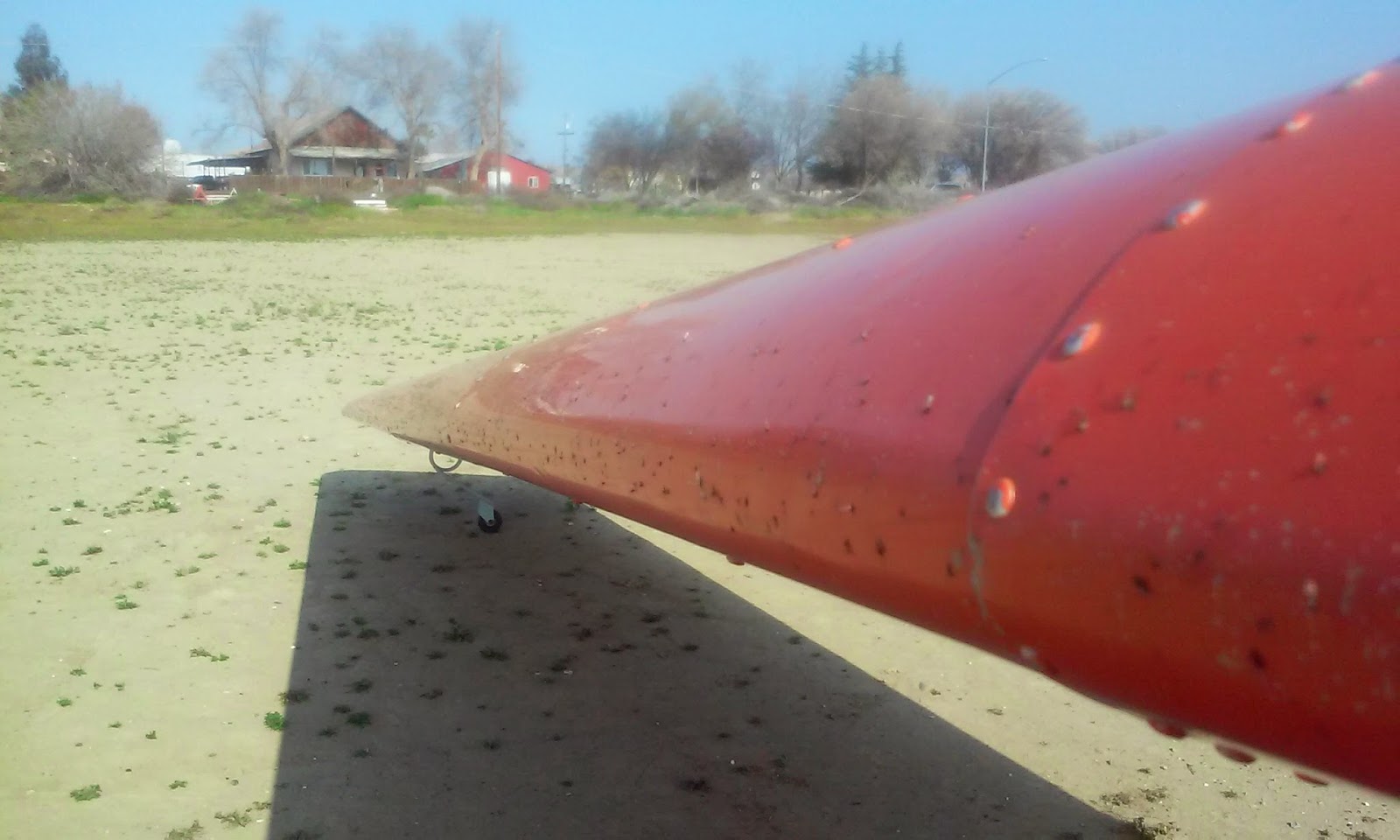 Plenty of smashed bugs accumulated on the leading edges. A sure sign that spring is almost here,  and there are already thermals! 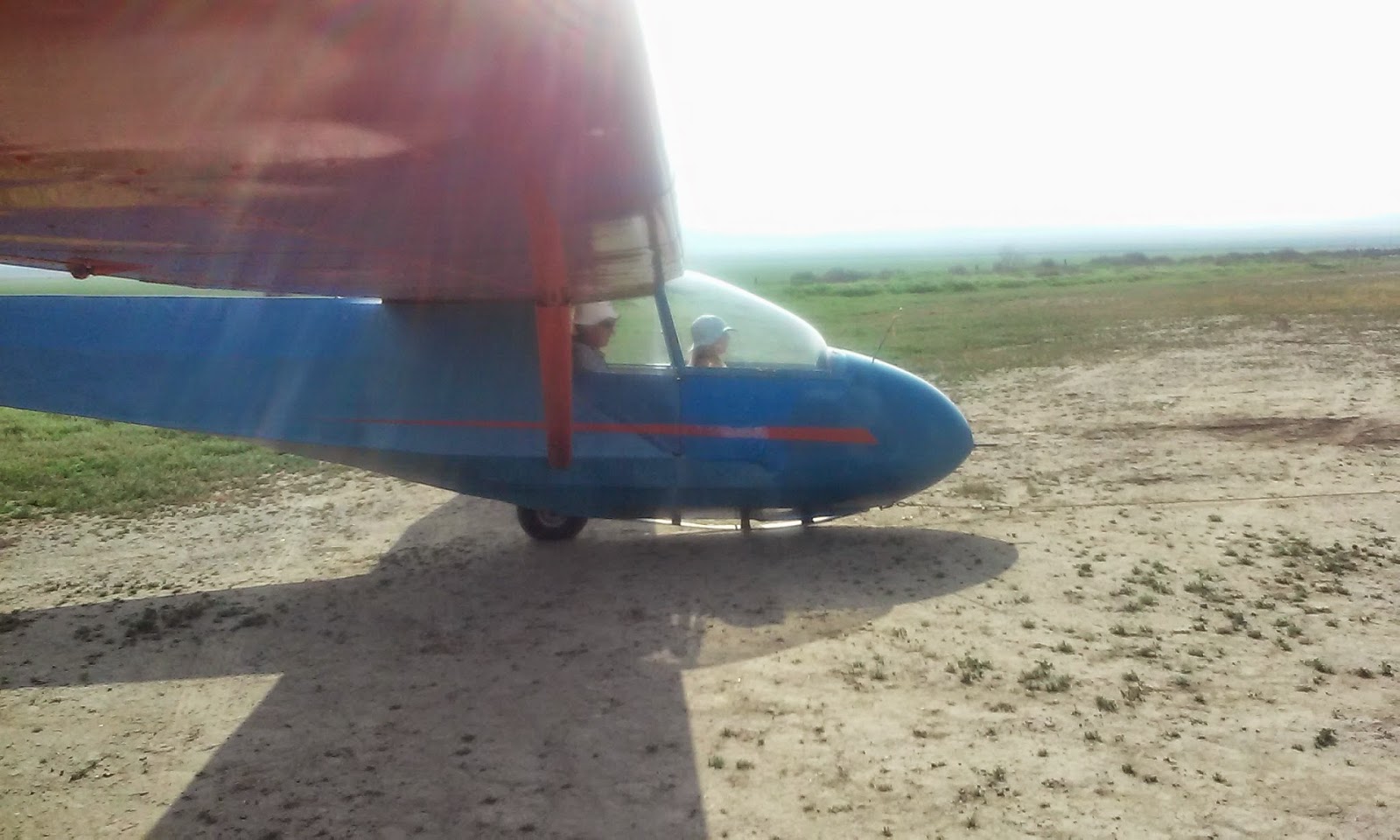 Jaimie Strickland and Harold Gallagher on another  training flight.  Jaimie is off to a great start,  and seems to be enjoying her flying. 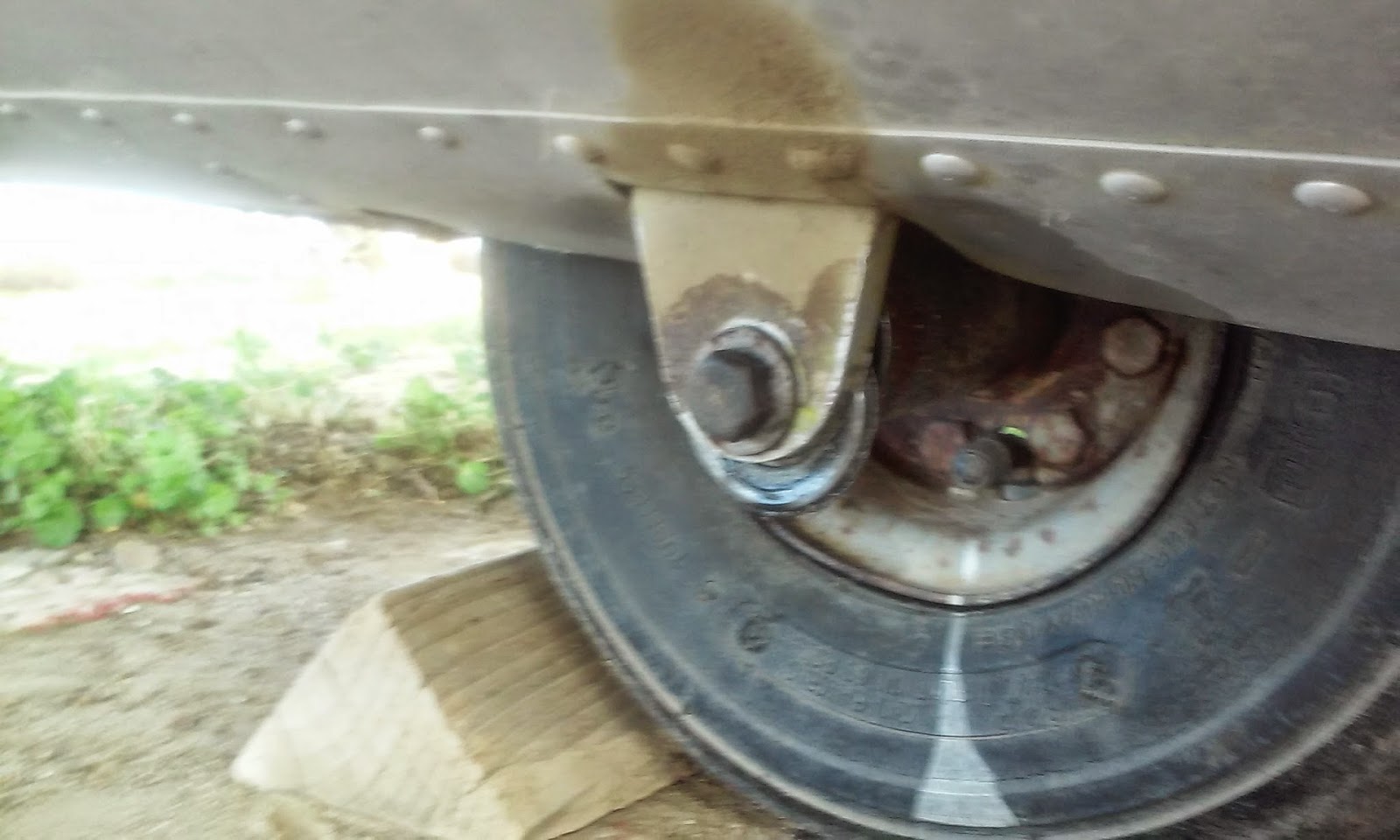 Wheel bearing went out on left side on the 1-26. Will need to be repaired before it is flown again.

Other pilots at the field today included Andy Reistetter who flew the 1-26, Skip Breidbach, who flew with Harold, helped out, and took some nice pictures. 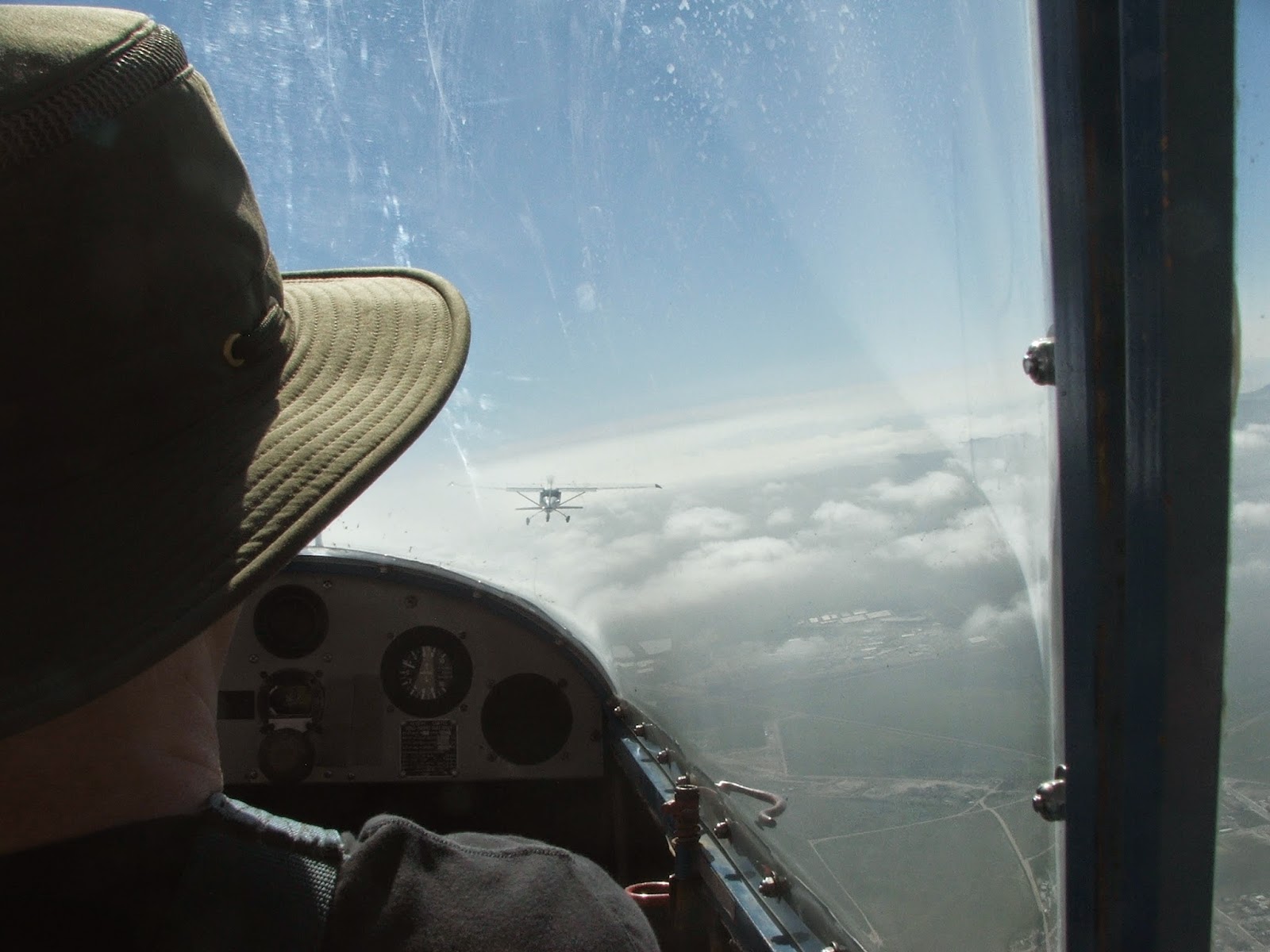 Dan and  Graeme McIntosh  started flying early,  and had made a lot of tows before any of the rest of us even got out to the field. Graeme did 15 rope breaks,  and  met his time and flight requirements to enter the Canadian instructor course this summer.  Dan then flew with Philip Gerfaud. Philip is working hard on his rating,  and has flown several different types of gliders in Europe that we can only dream about here in the U.S.  Well,  I can say I have flown the Schweizer 2-22, the 2-33, 2-33A, 1-26A, 1-26B, 1-26C, 1-26D and 1-26E. But that doesn't sound as good as some of the European gliders I'd like to try out.

Thanks to Craig for the Donuts!

We made a total of 28 tows today. Thanks to the tow pilots and the mechanics who have kept our tow plane going!

Thanks to Harold for the $600 Coalinga fuel run, without which none of this fun would have happened! 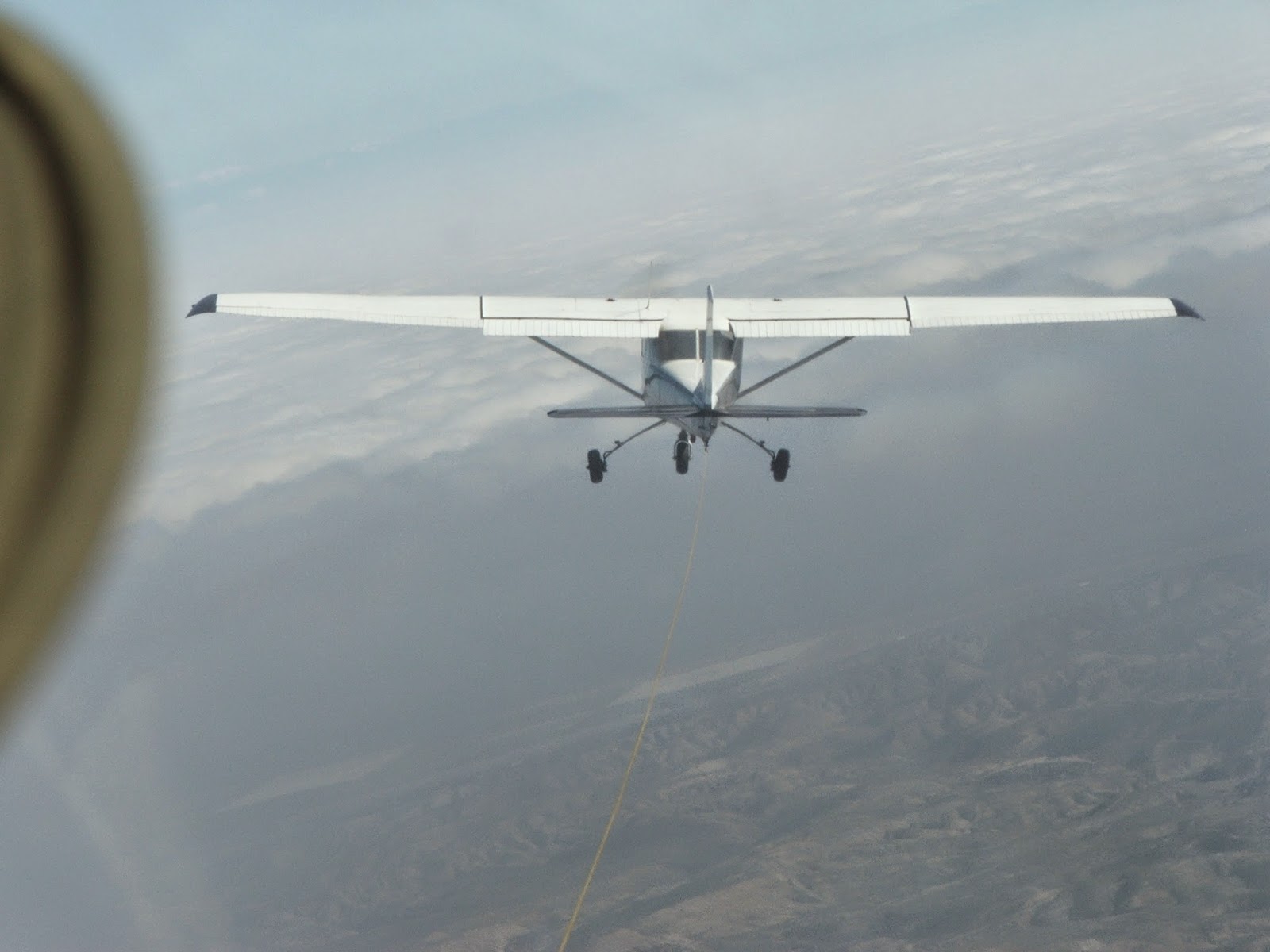 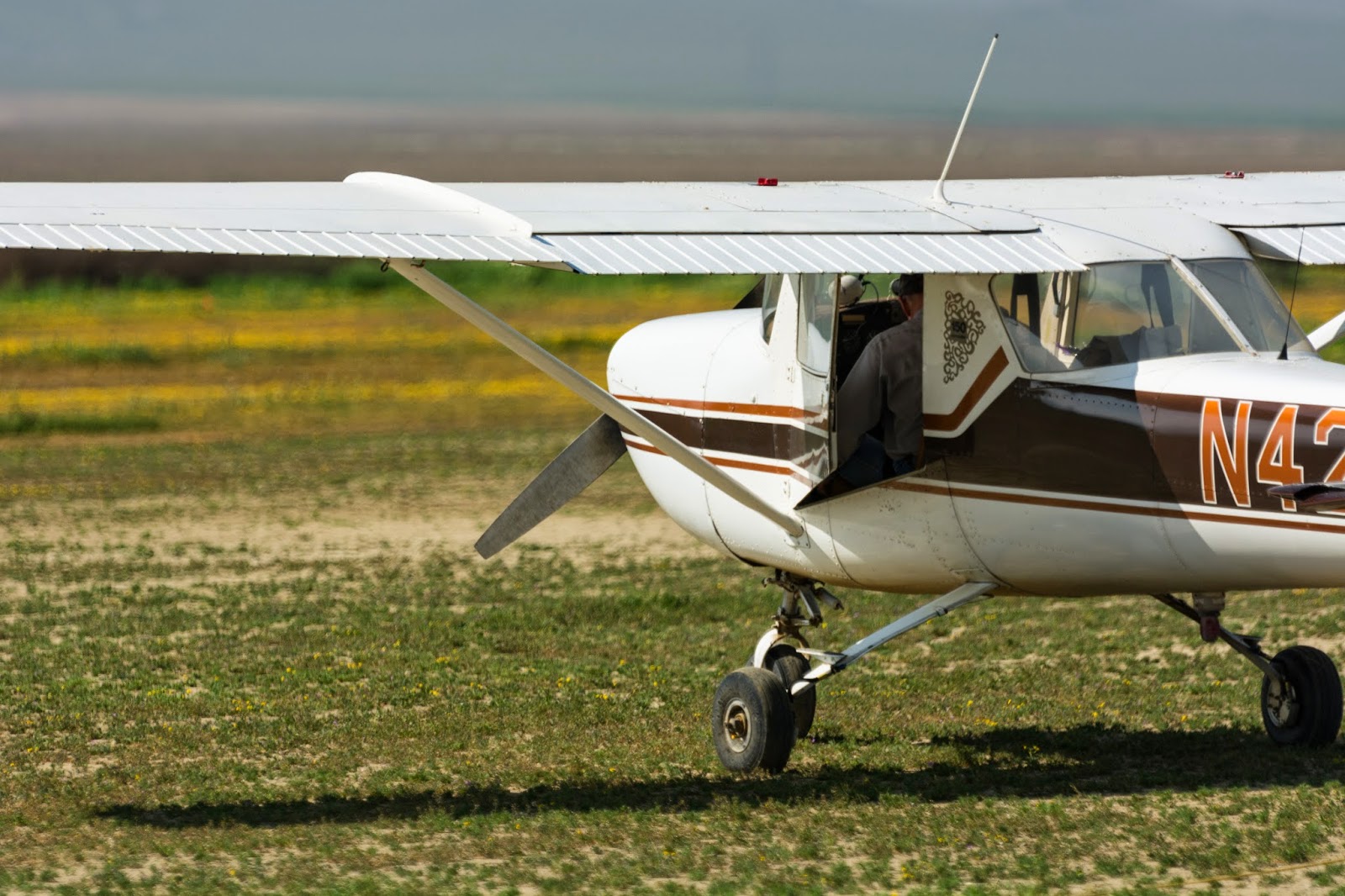 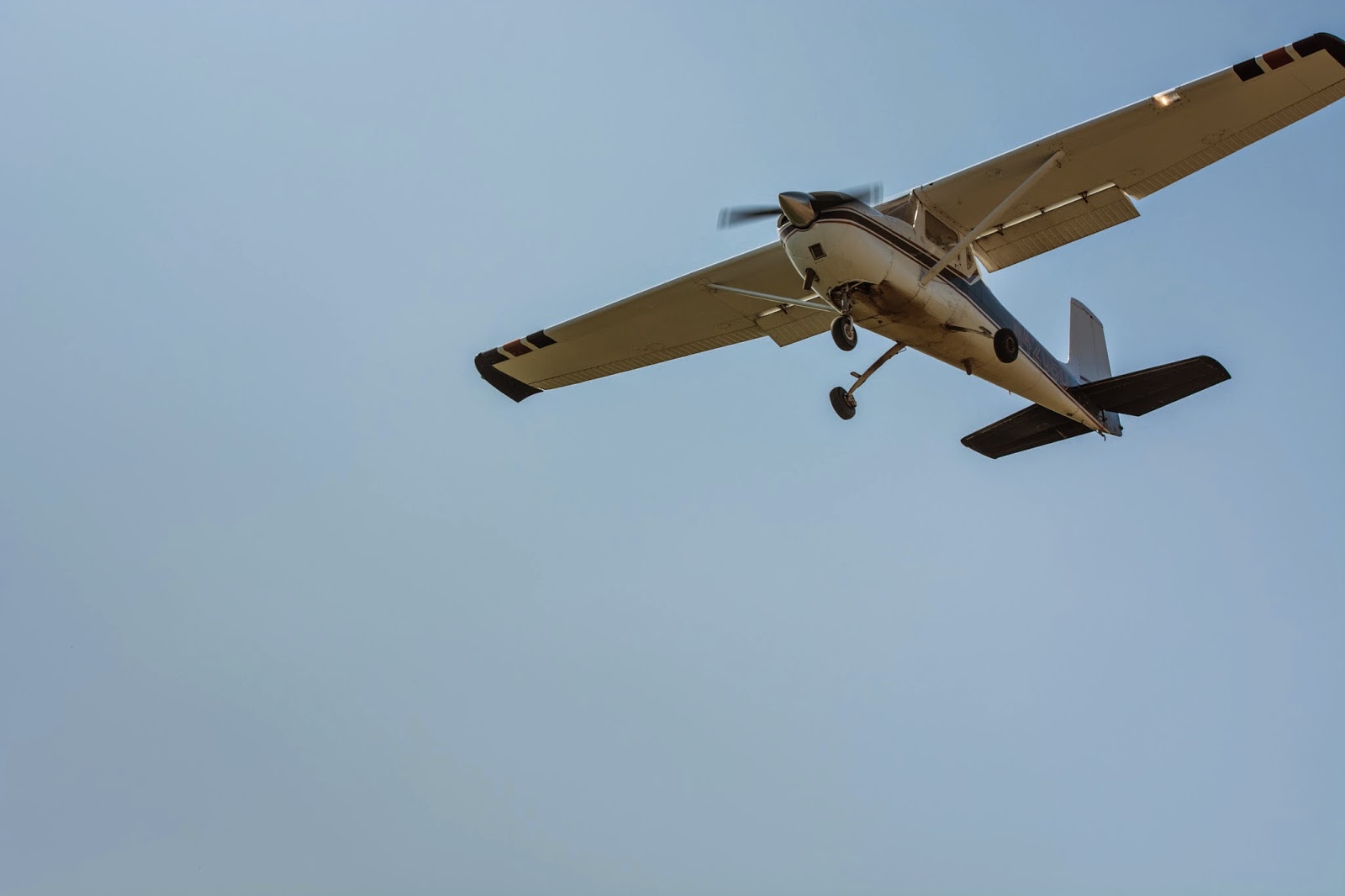 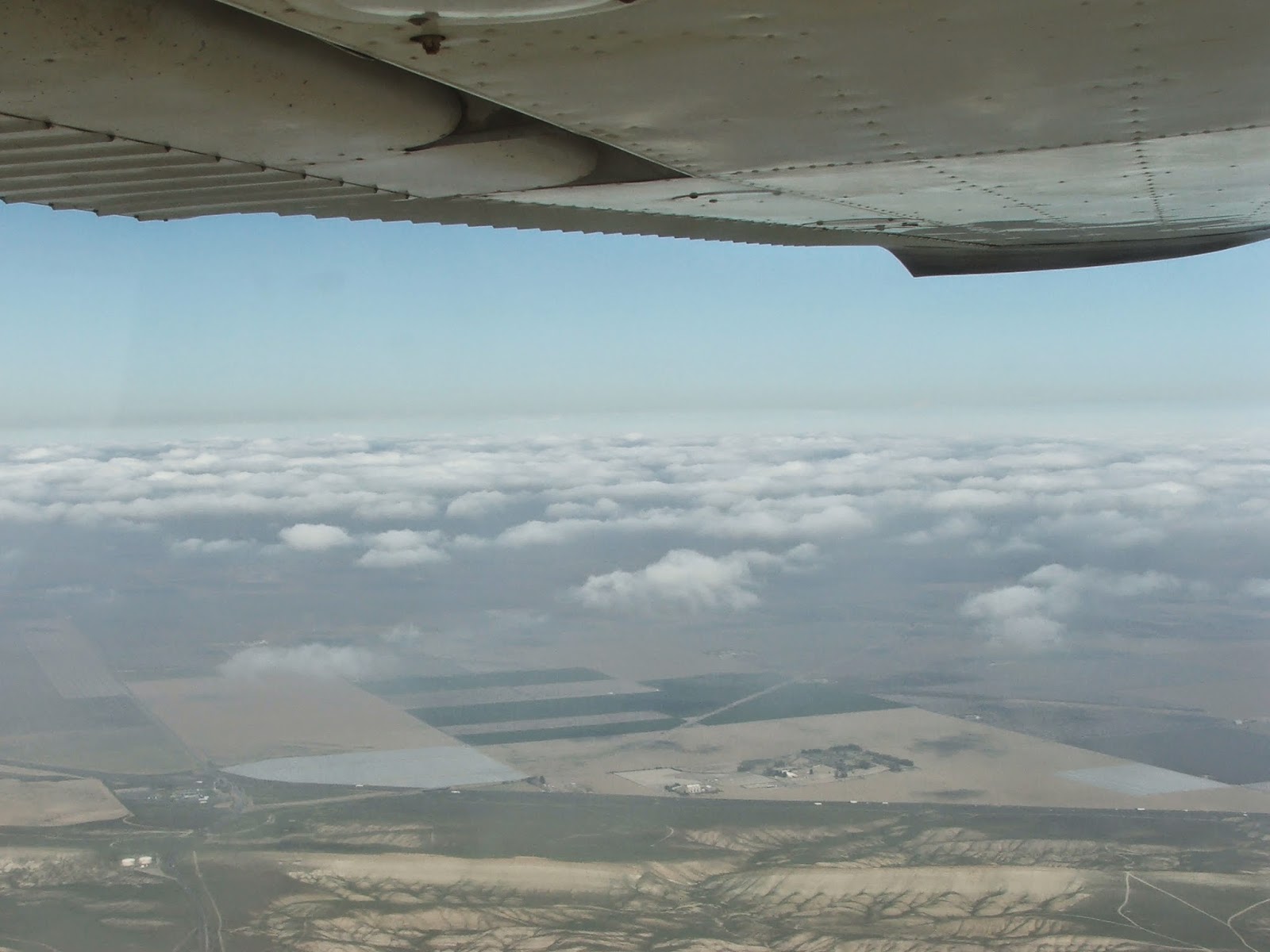 RASP recap:   From Bart's Avenal RASP forecast for the day from the previous evening. 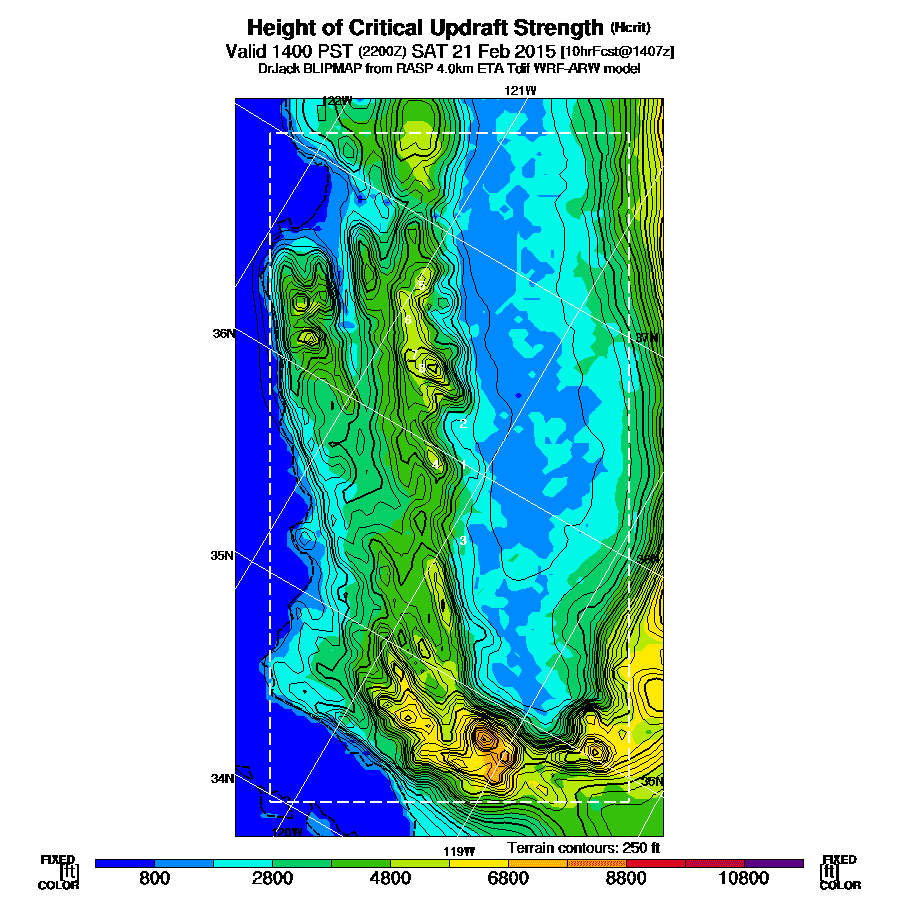 The Hcrit represents the height that an average "Joe Glider Pilot" might be expected to achieve. It was pretty close to what we got in the convergence, about 2800ft. MSL. Avenal is No. 1 on the map for reference. 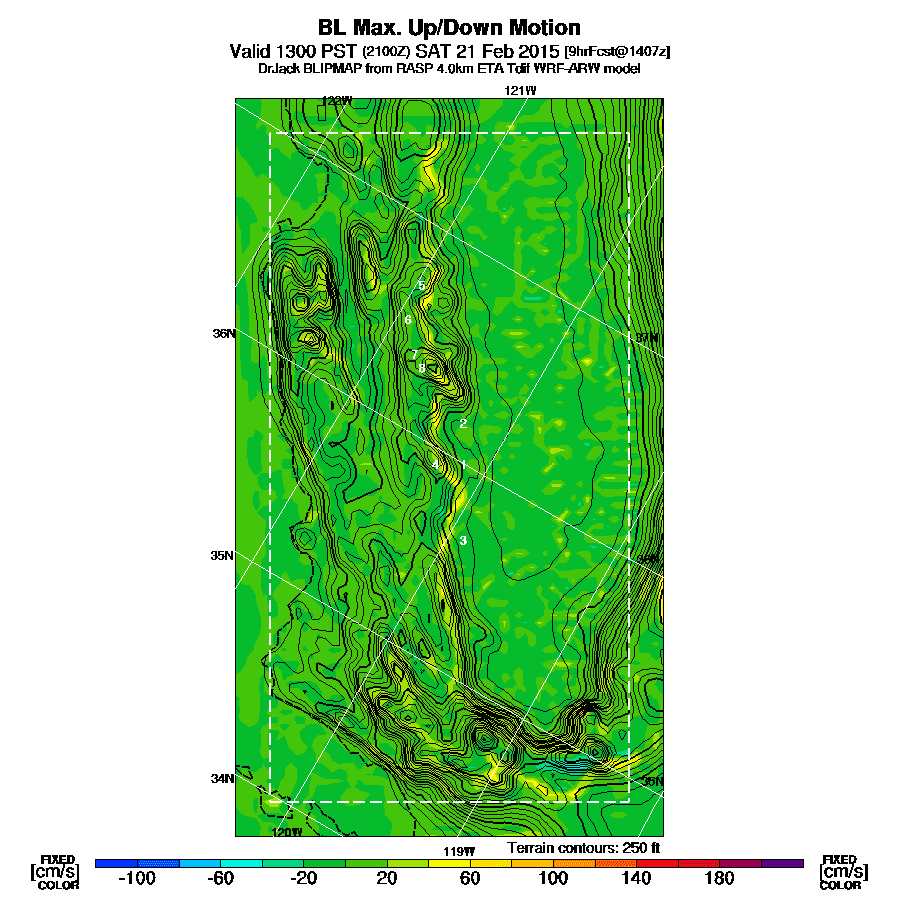 There was a convergence line during the day that was predicted here by the RASP. The line we actually got was just a little bit North of what is indicated here, by a mile or two,  but the orientation  of the line was accurate. 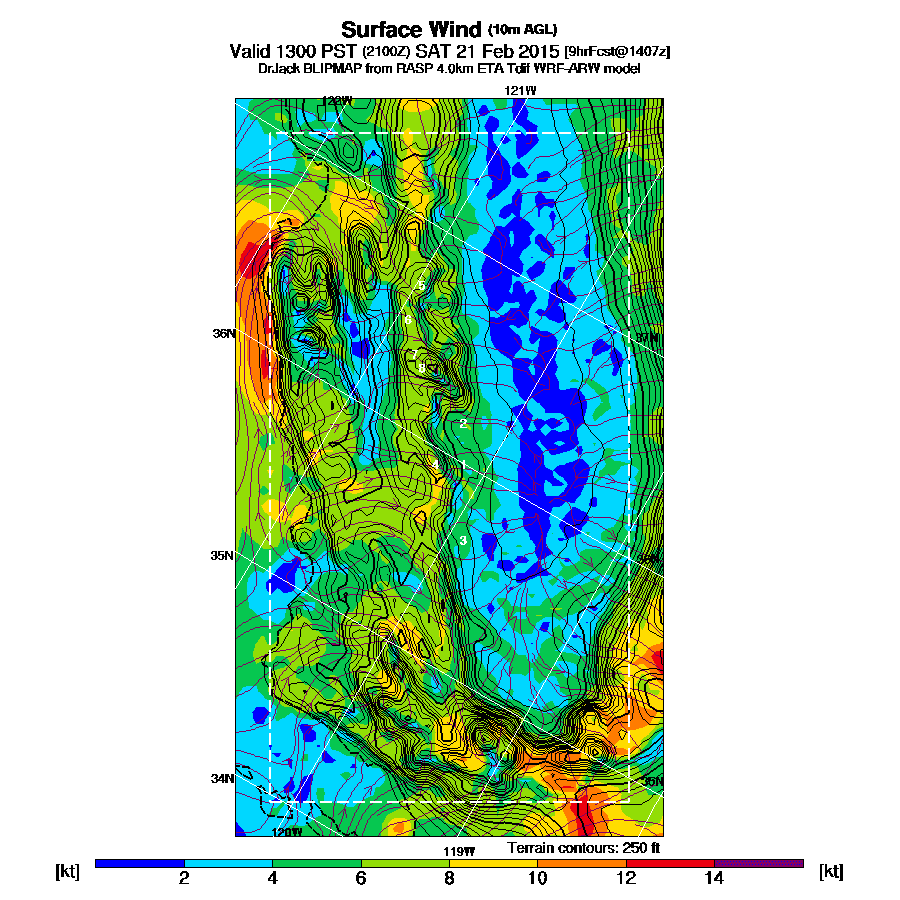 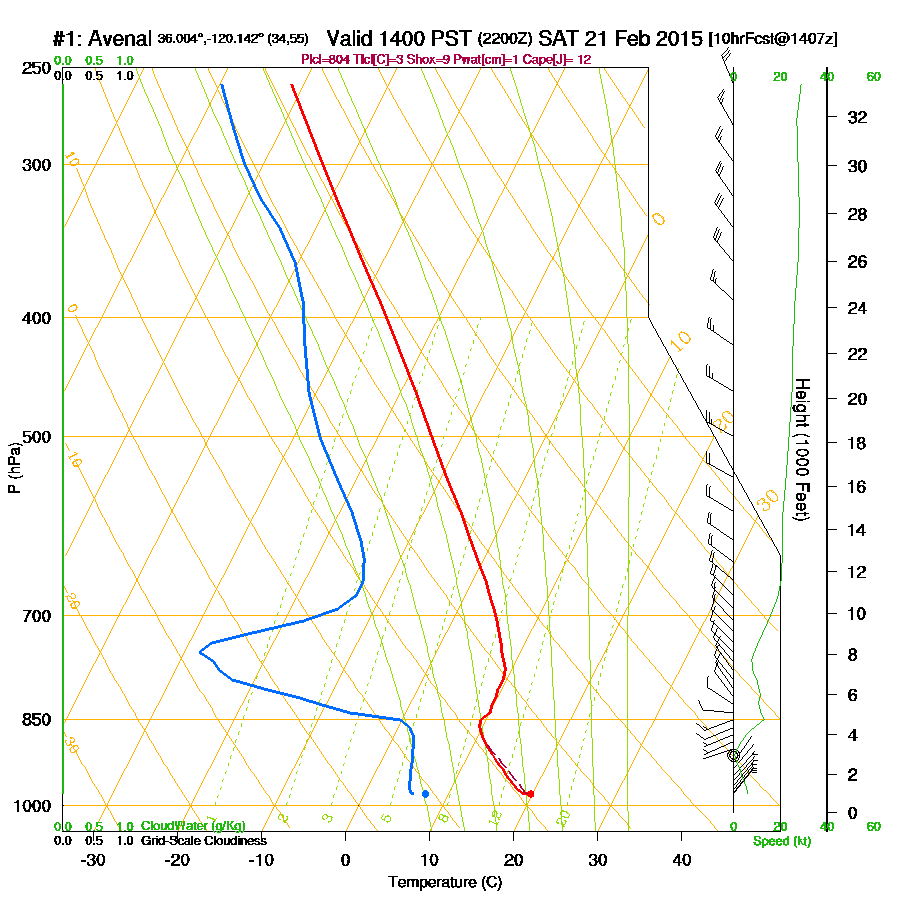 The predicted thermal height  indicated by the RASP skew-T Avenal sounding forecast was not too far off. However, there did appear to be somewhat more moisture in the atmosphere than what the RASP predicted, as the convergence line was marked by some scraggly cus most of the day. Later in the day, higher, thicker clouds started building up over the Black Mountain / Castle Peak area to the West,  and we could see virga and actual rain over the mountains by about 5:00p.m. This did not seem to be predicted by the RASP.  The Forecast discussion indicated a low was centered right near Fresno,  and was starting to build strength right in our local area, so the RASP may have been somewhat off on the timing of that event.
Posted by Alex Caldwell at 6:28 PM No comments:

WEATHER
Visibility:         3-4 miles at the beginning of the day, 5-7 miles later.
Wind:             A gust of 11 MPH was recorded across the street--we never felt anything that strong..
Altitudes:        Whatever you released at.
Time Aloft:     15 minutes.  Max.
Max Lift:        Enough to decrease your sink rate.
Temperature: 70° -74° F throughout the afternoon.
Comment:      Leisurely day.
Tow pilots:     Dan, Harry, Nick.
Dan started the morning with ground instruction for future towpilots Nick and Harry.  Nobody was ready to be towed before class, so the flying part of Nick and Harry's checkout was deferred until after class.

Dan gave a ground school about forecast products available and how to read them, air movement, stable vs. unstable air, why moist air is a detriment to thermal development, what happens to thermals after a shear line passes, and why the mighty Sierras don't lend themselves to ridge lift.

Alex followed with a ground school about the RASP, Regional Atmospheric Soaring Predictor, which is of interest to soaring pilots.  Alex went into the nuts and bolts of generating the forecast, and therefore some of its limitations, then he went on to how to use the products generated by the RASP.

Jaime Strickland is a Veterinarian in Tulare and a new member.  Here she is in Orange Crush getting briefed by Harold before takeoff.

Steve Valentine joined the club after an introductory lesson a couple of weeks ago. He's a good friend of Jan Zanutto's from the Fresno area, and shares a mutual passion for motorcycles with Jan.  Now it looks like he may have also been hooked by Jan with a fascination for soaring.
Harry Davies is a new member.  Orange Crush must be quite a change form his job of flying F-18s at Lemoore.

Around 3:30 there was a little bit of lift to be found.  Jim felt the left wing getting lifted over the circle crop and work it for about three 360° turns.  Did not gain any altitude, but did not lose any, either, staying right at 2800 MSL ± a few feet.  Probably could have worked it longer, but headed back towards the gliderport in hopes of finding something over the dry fields where a raven had found a little bit of lift.  Did not work, and there was no going back to the circle crop.  At 2000' MSL, about where one would make the downwind to base turn for runway 13, did get an actual climb and tried to stay in it, but that little bit of lift was surrounded by sink.  Time to come home.
Posted by Jim Rickey at 9:28 AM No comments: