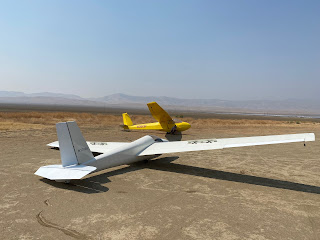 Smoke from fires to the north and the south made for bad visibility this past week.  But it improved somewhat on Saturday and we had a dozen or so flights at Avenal.

Notably, Quinn had a 1+ hour flight up to ~6,500' to earn his C Badge.  Carl made a few flights in the 1-26 using his brand new glider rating and Kyle worked on PTS maneuvers for his upcoming practical test.  Finally, Rick's flights were focused on getting the pattern and landing dialed-in precisely.

Meanwhile, on the ground, Alex was doing some remedial work on the ailerons of 1B, and Zach made a run to fill the fuel trailer and dropped off some other supplies and materials.

And, if you haven't been to the field in the past few months, you'll find a new bathroom door, new soap and towel dispensers and new toilet seats!  The Board will have some other work projects on the list for a work day this fall. 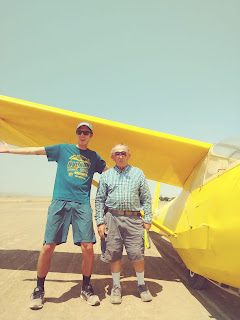 Quinn Marsh (L) Solos!!! After sticking it out with his instructor Alex Caldwell (R) ,  passing his pre solo written exam, and wading through  getting his temporary student license through the FAA's IACRA web site. Quinn made 3 very nice solo flights today in our SGS 2-33A,  "Big Bird",  N3613F. In fact,  he seemed to find weak lift, and had our longest flight of the day!
Yes! I am beginning to think these clothes do make me look short! Will have to talk to wife Diana about these clothes she's been getting me! They also seem to make it appear that my stomach sticks out in front a bit! Another thing I'm noticing is how these new digital cameras make it look like your hair is thinning on top  and turning  grey! Funny, we never used to see  that effect before  with the old Kodak Instamatic film cameras we used to use in gliding  although they did have that same "shortening" effect, but curiously,  not the "enlarged  stomach" effect!  It may be something to do with the default lens focal length, perhaps kind of a "fish eye" lens effect, that may also be causing the hair thinning and "shiny on top"  head effect!   The "gray hair color effect" is likely some kind of "chromatic aberration"  problem with the new digital photography, possibly,  (I hope)! 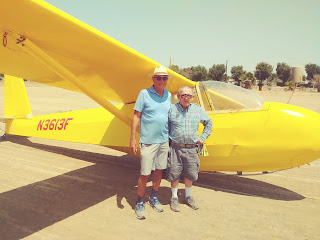 Newly rated ( a week ago last Thursday) glider pilot Carl Lindgren(L)  came out to schmooze with last week's recommending  instructor Caldwell(R) and also  made 3 good flights, as PIC, in our club's  SGS 1-26E single place sailplane.  I think he might be looking to accumulate experience,  so he can  fly the club's DG 100 sailplane next! Carl has a lot of farming experience in his background, and was seen today removing tumbleweeds with a shovel from the glider tie down area after finishing flying. He also knows how to drive a tractor, and has an impressive tolerance to working outside in the oppressive heat we've had all this summer at Avenal!
Also flying with Caldwell today was Christian Cueto, from the Cal Poly University Akaflieg Group, who is doing very well.  He practiced low and high tows today, boxing the wake, and practiced premature termination of the tow, light cross wind,  as well as accuracy landings.    Christian is well on his way to soloing, I strongly suspect.
Private Glider Pilot John Harbick came out today, arriving at 06:30, and expecting a grueling flight review with instructor Caldwell.  His previous flight review was found to still be valid, until the end of June, 2022,  however. So he made three nice solo refresher flights in "Big Bird".  It actually appeared from the ground, that he was  doing quite a bit better without Caldwell even being on board!  We think his previous flying  experience back in Viet Nam,  as a copilot/observer in Forward Air Controller aircraft is paying off for him!
Quinn make a cool video of his first solo glider flight today. I'm the one holding the nose of the glider down at the very beginning as he gets in. I also checked the seatbelts in the back cockpit to be sure they were secure and were not going to be able to catch the controls back there. I also secured the back door. I think most of that was edited out of the video. Be sure to have your sound turned up!
https://www.youtube.com/watch?v=cu7uvQllMKw
Posted by Alex Caldwell at 3:18 PM No comments:

The San Joaquin Valley filled with smoke today from the recent wildfires in Northern California, presumably.  Hanford AWOS was reporting visibility of 4.5 miles in "haze".  We could just make out Tar Canyon and Tar Peak to the SW of the field, so that seemed about right. We could not make out Black Mountain to the West, which is a bit  further away at about 7.5 to 8 miles distance. Rick Ibarra and Quinn Marsh came out,  and we decided to do some training flights.  Carl Lindgren also came by but did not fly today.  Congratulations to Carl on passing his private pilot practical test last Thursday with DPE Dan Gudgel! Flight visibility was pretty poor all day. We've been pretty lucky so far this year not to have had a lot of smokey days from all the fires, but our luck ran out today.  We only did pattern tows today.  Both Quinn and Rick got quite a bit of practice at "premature termination of the tow" rope breaks, as well as "no wing runner" take offs, and take offs and landings on different runways.  In some directions, we didn't have a distinct horizon, but we could always make out references on the ground, and Tar Peak and Tar Canyon.   On one flight, Rick found a nice thermal right after releasing at 1100 ft AGL.  He was able to climb up to 2950 ft. MSL. We quit there,  because of the smoke and reduced visibility.  Both Quinn and Rick are very close to being able to solo. Rick  is a licensed power pilot with instrument and multi-engine ratings,  and  is looking over the glider  Pre-Solo test I gave him, and Quinn just finished his IACRA application for his required FAA Student License,  and is also doing the FAA required pre-solo test.   The "Skew-T" App, a free app available for the Android system, that  I have on my phone, pulls up a forecast from the "Op40"  computer model forecast.  For Avenal Airport,  it indicated thermals could go up to as high as 5500 MSL in mid afternoon. But I don't believe that model takes into account the effects of smoke on cutting down the heating, due to the reduced  amount of sunlight reaching the ground.  It also does not say anything about the effect of the smoke on flight visibility.  I'm sure the thermal we had would have gone somewhat  higher, but we quit trying,  due to the poor visibility.   I actually  don't think any of the currently popular computer based  soaring forecasts take wildfire smoke into account.  There is, however,  a newer "Experimental"  version of the HRRR (High resolution Rapid Refresh) computer  model available from the NWS that does try to take the effects of smoke into account. That new HRRR computer may become more useful. It also  forecasts a visibility parameter,   which should  be useful for  soaring, as well as other types of flying.
Posted by Alex Caldwell at 7:08 PM No comments:

Here are the last couple of seconds of Carl's 3rd and final flight.

All takeoffs and landings were on runway 12L today.  During the third and final flight, wind was out of the southeast to south, probably 15 knots, definitely favoring runway 12.