WEATHER
Visibility: Unlimited
Wind: From the NW at 4-6 kts
Altitudes: Release since not much lift.
Time Aloft: Unknown
Max Lift: 1-2 kts
Temperature: Cool, low 60's
Comment: Unable to soar after 1:30 pm
Tow pilot: Kyle Jason
Well, we flew at least in the morning until about 1:30 pm when the towplane tire sprung a leak. For various reasons we had to cancel the afternoon flights, disappointing to all of us who hadn't flown yet. But these things happen and we'll make up for it next weekend.

We borrowed Doug Morris' tractor to remove the pile of dirt in the middle of the runway left over from previous land smoothing operations. Doug is one of the nicest and most generous people you would ever know and he's done so much for the club in many ways, mostly unknown to the general membership.

As a result, Ken Talovich took Doug for a ride in his beautiful RV-8 just after Doug delivered his tractor once again for us to use. Later on, after I'd finished leveling the runway, I called Doug to inquire about his flight. He repeated three times, "That was a ride of a lifetime". Thanks to Ken, Doug has wonderful memories and in a small way, a gift to him for all his efforts on behalf of the club.Thanks Ken.

Most of the pictures shown here were taken from the tractor about midfield, waiting for each launch or landing. We coordinated our efforts closely and the morning ops were conducted without delay and very safely. Finally that dirt pile disappeared into the infield.

WEATHER
Visibility: Unlimited with puffy white clouds against a deep blue sky.
Wind: Northwest at 5 kts
Altitudes: 4500+ msl
Time Aloft: 2+ hours
Max Lift: 4 kts
Temperature: Cool 60's
Comment: A picturesque day.
Tow pilot: Dan Gudgel tow training and Julie Butler towing.
Dan Gudgel was out early doing tow training. Don Flinn had a group from Cal Poly learning to fly and so it turned out to be a fairly busy day. Kyle Jason did get the approval from Dan to tow on his own so we've added another good pilot to the tow roster. Kyle is a pilot from Lemoore much as we have trained some of those pilots in the past.

Ken Talovich and I flew out in Ken's beautiful RV-8 and did three flights in preparation for his checkride which we need to schedule for the near term. He's doing well, up to speed on the required maneuvers and lacks only the prep for the oral portion of the checkride plus another few flights to polish his skills even more.

Lawrence Golomb flew the DG100 this afternoon but no report from him yet.

Julie Butler towed in the afternoon after Dan Gudgel had trained Kyle Jason on towing. Here is a picture she took of the beautiful day at Avenal:


Here is Peter Sahlberg's write up on his flight today.

I came out Saturday for the sole purpose of going up and coming back down, twice.  I have not flown much and it looked like the weather would be clear enough for a couple of tows and landings.

The rain left a partly cloudy sky and the RASP said that there would be lift over the mountains in the early afternoon.  This was a pleasant surprise, but I still expected to go up and right back down.

Take off was at 12:30 with clouds over the field and mountains.  This was not the "up and down" weather I had expected.  I got off at 3,000 feet over the hills to the east.  This area had clouds forming and decaying and it was a great learning experience as some would provide lift and others would not.  Every effort was made to stay above 3,000 feet as I felt that getting back up from below that altitude would not be easy.

I did want to see what had developed over the mountains so after working the clouds over highway 33, I headed over.  There was more cloud coverage and it was interesting to see how the mountain sides with burned areas disappeared when they were in shadow.  Two forays looking for the convergence got me below 3,000 feet and the rest is history.  I made the trek back to Avenal and never found the bump needed so I landed on runway 31 with 1.4 hours to log.

I did not take another tow for the second landing! For those interested, the trace is on OLC.

Jan Zanutto flew in with his buddy Sam, in his newly acquired Cessna 172. Here is Jan's response:

Yesterday I flew into Avenal and was pleased to see the CU development along Black and up to Coalinga.My friend Sam wanted to shoot some approaches at Coalinga, and while inbound to there we hit some pretty good bumps that gave us a good ride. Wish I would have been in a glider instead!
Here's what it looked like..... 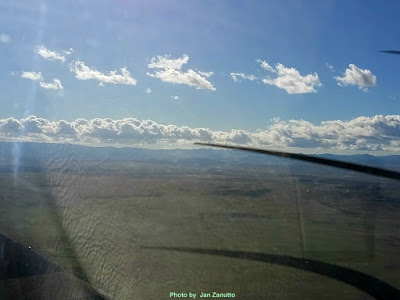 Here are the only pictures I took today since I forgot my camera and my cell phone was nearly out of battery power. The ships flying today were the 2-33's, the 1-26, the DG100, and the Schweizer 1-35. We had three arrivals in powered aircraft including a 1966 Cessna 172G from the Coast (registered to a James Odell from Gilroy), Jan's Cessna 172 from FCH, and Ken's RV-8 from Pine Mountain Lake airport.

Posted by Unknown at 4:13 PM No comments:

Posted by Unknown at 5:00 PM No comments: