WEATHER
Visibility: Quite good. The smoke was gone (probably just temporarily). Just a pretty normal haze for this time of year.
Wind: light and variable all day.
Altitudes: We got to about 3500 MSL in the 2-33. Other ships probably got somewhat  higher.
Time Aloft: 30 min. max in the 2-33.
Max Lift: 400 fpm. briefly. Enough to stay up for a while and enjoy the flying,  without too much turbulence,  or the extreme heat of the past few months!
Temperature: 92 deg. F. It was quite pleasantly comfortable today.
Comment: Thomas Wolfe solos! Wyll Soll flies the Discus 1B! Veronica Guzman and Ignacio Lopez take FAAST introductory lessons. Logan Stevens from San Luis flies in the 2-33. Lou Marquez opens trailers!
Tow pilot: Jim Rickey
The smoke was going somewhere else today! We had almost forgotten what it looks like without it until today! 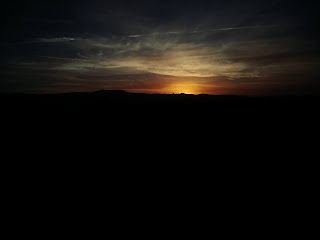 It was a very pleasant day today  out at the  Avenal aerodrome. There was more activity going on than we've seen for a few weeks. Thomas Wolfe soloed in the 2-33,  N3613F! He did an outstanding job! He was close to soloing at his home in Chicago at the Hinkley Gliderport,  flying an ASK-21 for about 25 flights earlier in the summer, but is now back flying at Avenal where he had started flying a few times in the 2-33 last academic year.  We had flown at Avenal last week in the 2-33,  but could only do pattern tows,  due to it being very smoky that day.  First, we went over his pre-solo written test, which he had done at home,  and passed with flying colors.  Then, we did one 2500 ft. AGL tow,  with some low tow, wake boxing on tow, and  some stalls, steep turns, slips,  a bit of thermaling, followed by  a slip to a landing on runway 12 . Then we did a short flight with a practice rope break with a landing on runway 8.  Following this, Thomas soloed,  and he did a great job!
Wyll Soll made a deal with Carl Engel to fly CZ, Carl's beautiful Discus 1B sailplane this season. Wyll trailered CZ to Avenal for his first flight in the ship.  I gave Wyll an insurance required  "cockpit checkout".  I must have done a really good job,  even if I do say so myself, because he did two flights in the ship that appeared absolutely flawless! We saw him take off from the air while we were up in the 2-33 on both of his flights,  and we saw his last landing from the ground. He appeared to have an ear to ear "Discus grin" on his face after that landing! On one flight, when we were up in the 2-33,   we saw him flying in a thermal just south of the airport,  and then heading over in our direction. After the flight,  he said it didn't seem like we were "too worried" when he was flying in the same thermal with us. We replied "well maybe we might have been, if we had even known you were there!"  (the visibility is very limited from the back seat of the 2-33!).
Avenal residents Veronica Guzman and Ignacio Lopez came out and each took an SSA FAAST introductory lesson so they could "check it off their bucket list". Everyone enjoyed having them out there flying with us!  They both seemed to enjoy it too, and seemed to like the FAA glider flying handbooks and log books they received. Hopefully, they'll come back for more flying fun in the future! We hope to get a copy of the video they took as an example of what a FAAST introductory lesson is like for other interested persons.
Logan Stevens flew out from San Luis Obispo in a rented Cherokee 140. He's working on his commercial power license over there,  and is also looking at getting a  glider rating here at Avenal. He flew the tow very well. We did some low tow practice,  and he'll be able to box the wake the next time he comes out,  I'm sure. He has only had one other glider flight before today! 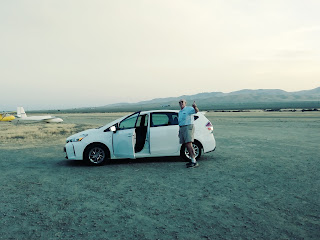 In the photo above, tow pilot,  A&P mechanic, glider pilot, and CCSA board member  Jim Rickey waves as he gets ready to leave for home,  as usual, the last person to leave the airport for the day, after performing many behind the scenes,  often much underappreciated work, not only on the tow plane,  but on  other club facilities,  "so that others may fly!"
Lou Marquez was out there all day today. He opened the two trailers he's got parked out here recently, letting us all see and admire his Lazair style two place powered experimental "GAPA tow plane" (we fantasize and hope, some day, maybe)  in one trailer,  and a beautiful looking Jantar 2 open class glider in the other.  The Jantar 2 is a now older, but still very potent open class sailplane designed and built in Poland, one of the World's historically most active and talented of soaring countries. It has about a 48:1 glide ratio, comparable to it's contemporaries,  the  Schempp Hirth Nimbus 2, or the Schleicher  ASW 17.  It's very strongly built,  and is cabable, in strong soaring conditions, with a strong tow plane,  and lots of runway, of carrying a whole bunch of water ballast, and making very long soaring flights.  There was a 2A  model,  and a later 2B model,  that had the wing mounted a little higher on the fuselage and a slightly longer gear leg, so as  to give the wings a little more ground clearance on landing. Until we can get it out of the trailer, to examine it, along with it's accompanying paperwork etc. , we won't be sure yet which model this one is.
Also seen at the gliderport today was Sergio Grajeda. Sergio didn't fly today,  and was working on some things. But he recently got his glider flight review done, and wants to start working on a commercial and a CFI rating in gliders. He is a quite capable pilot, and we hope he will "get it done"!
Avenal insects behaving badly!  We noticed one interesting thing I had not seen before today when Luke and Jim Rickey were winding up the tow rope for storage until the next flying session. The yellow polypropylene tow rope had been laying on the ground for a while,  not too far from a mound of giant red ants that we have on the runways at Avenal. There was a trail of ants from the mound about 20 feet going over towards the tow rope. The rope was full of big red ants that had worked their way down between the strands of rope. I think they might have smelled something edible in the rope,  or else they were trying to use their big jaws to pinch off chunks of the rope itself to take back to their nest and feed to their larvae in there, or maybe even to their queen!  I don't think I've ever heard of ant biting listed as a cause of a tow rope failure, but there's always a first time, I guess!   They just might be in a late season feeding and food storage frenzy, I think! They might be getting desperate now that the fall season and approaching winter are upon us! That's my theory, anyway! Wish I'd thought to take a picture!

Posted by Alex Caldwell at 8:56 PM

Email ThisBlogThis!Share to TwitterShare to FacebookShare to Pinterest
Labels: soaring