WEATHER
Visibility: 10+
Wind: Calm
Altitudes: 5500 Alex Radko
Time Aloft: 1.5 hrs Jim Rickey
Max Lift:
Temperature:
Comment:
Tow pilot: Luciano Worl
Congratulations to Logan Stevens for soloing on Saturday! It was another nice October day for training flights. The temperature got to 72 deg. F. The winds were "light and variable" all day. There were no clouds during the day over the airport. Early in the morning, we could see some coastal stratus clouds just spilling over the mountains a few miles to the West. The clouds were coming through the Cottonwood Pass,  where Hwy 41 and 46 come over the hills from the coast. But those clouds burned off by later in the morning,  and did not affect us at Avenal.  We all got there quite early.  I think we were in the air on the first training flight by about 08:30.  I had a feeling, from his flying last week,  that Logan would be ready to solo today if we had more time to make a few more flights. We made, I  believe 5 dual flights. 3 of them were to 2000 ft. AGL,  and he practiced boxing the wake on all 3 of those flights, as well as some stalls, "rolls on a point", steep turns, slips and slips to a landing, with 2 landings on runway 8 and then 1 on runway 12, and some extra work on signals on tow,  and the causes of,  and how to handle,   "slack in the tow line". Then we worked on "simulated rope breaks", now called  "PTTs" or "Premature Termination of the Tow". We did 3 PTTs,  with landings on runway 8,  and one PTT straight ahead on 30, which was short, but still counts as a "flight",  since we did leave the ground. Then we retired temporarily to the clubhouse porch where Logan filled out his pre-solo written test and we discussed all of it.  Logan then did, I believe 4 solo flights in total, in our 2-33, N3613F. All these solo flights  were very nice. He got some lift on his last flight and climbed to about 3700 ft. MSL!  There were by then,  some small, anemic looking dust devils to the west of the airport near the solar farm, and he stayed up the better part of an hour. His landings looked like each one was getting better and better. He was controlling his airspeed very well, and using the dive brakes to control and modulate his glide path in the landing pattern,  while judging where his aiming point should be,  so as to be able to control where his touchdown point, his landing roll out and his stopping point should be, all based on the conditions he was encountering,  as to the wind, runway slope and runway surface condition, etc.
Carl Lindgren also came out early and helped Logan with all the preflight duties on the glider and getting it ready for flight. After completing the pre-flight duties, he also made 3 very nice dual flights with me. We reviewed transitioning to low tow, which he had already done with Kevin Shaw,  then he started boxing the wake. He did very well with boxing the wake, and I think next time we'll review what he did today, but will also start working on doing the premature termination of the tow procedures. When he's doing all those activities well, he'll very likely be ready to solo also!
We're using the Russell Holtz progress sheet, which is very useful for the instructors and students, as they can see their progress, and what's coming next. The instructors can see easily what the student has done with the other instructors on other days. The students can see areas that they haven't yet done, so they know what to expect, etc.
Aleks Radko was at the field again flying his Glasfugel 304 glider. I believe he had the longest and highest flight of the day. Attached is a picture of Aleks disassembling his Glasfulgel 304.
Here is a link to the "Online Contest" page where he has been posting all his flights recently:
OLC Flight information - AleksRadko (US) - 24.10.2020
Jim Rickey flew the 1-26 for about 1 1/2 hour too, as reported by Zach already.
Also making a flight in the 1-26, but too late in the day to get any decent lift, was Sergio Grajeda. Sergio was helping Looch Worl a lot in fueling the tow plane, putting it away, winding up tow ropes, etc.
We were very lucky today to have Looch Worl come out and tow for us. He arrived very early in the morning and stayed out there the whole day! Except Jim Rickey did the very last tow of the day for Sergio Grajeda.  I believe I heard we did 16 tows total for the day. We need to get Looch up in a high performance glider on a good soaring day!  What say you Morgan?
Alex Caldwell 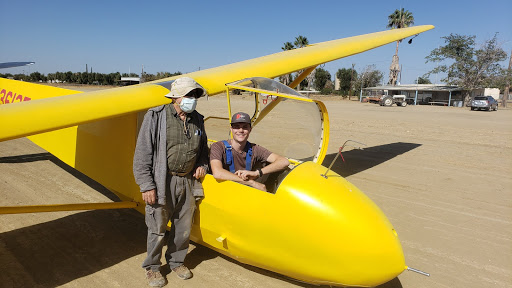 Posted by Zach Yamauchi at 4:56 PM