WEATHER
Visibility: Excellent, unlimited for the most part, except cumulus clouds everywhere, with a bit of virga in a few places, but not reaching the ground today. like I'm told happened yesterday.
Wind: Light all day at the surface. About 12 15 kts from the NNW at altitude.
Altitudes: We got to 8700 ft. MSL in the 2-33. Others in high performance ships undoubtedly got higher.
Time Aloft: Our longest flight in the 2-33 was just over 1 hour.
Max Lift: 8-10 kts.
Temperature: Very pleasant at the surface. It got a bit cold at our Maximum altitude in the back seat of the 2-33, especially when under a cloud.
Comment:
Tow pilot: Logan Stevens most of the day, Chris Banys later in the afternoon. Many thanks to them! 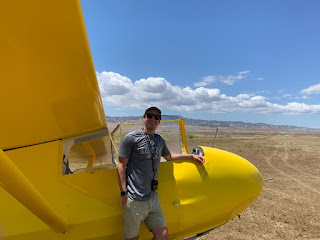 Patrick Dillon Solos!
Patrick soloed in the 2-33 today! He has flown at Avenal and also in Colorado at Steamboat Springs. Patrick also has quite  number of winch launches at Steamboat Springs, which is uncommon at Avenal. In any case, we did one practice rope break at about 250 - 300 ft. AGL and were able to make a left turn and land on runway 8 with a slight right crosswind. Patrick handled that well, and then after reviewing and discussing his pre-solo written test, he made two solo fights and did very well. There was less wind shear today between the surface and the first 2-4 thousand feet of altitude than last week. So the tows were not quite as rough.  There were  5 private ships and the 1-26 that had gridded and were  anxious to launch, so we let all of them, except Carl in the 1-26  get going before cutting Patrick loose. They all got away after making one circuit of the field and then towing out towards Tar Peak. We were getting radio reports that they were getting good climbs to about 8500 ft. MSL out in that direction. So Patrick had the sky over Avenal Airport  mostly to himself when he finally  got in the air for his solos. His take offs, tows and landings were all good. Unfortunately, he didn't contact lift on either flight, so he wasn't able to stay up and soar. But he handled the patterns and landings very well on both of his flights. He looked like he was appropriately "Stoked" after landing! 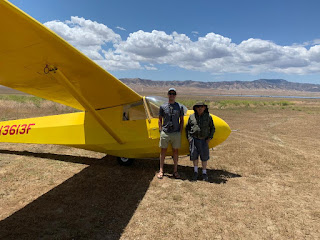 Posted by Alex Caldwell at 3:15 AM