I checked Bart's RASP Friday evening.  Looked good, better than I had expected with the incoming storm tracking so far inland.  Still looked good Saturday morning.  As Saturday morning progressed, though, I was pretty sure the cloud layer was going to suppress the low level thermal action. 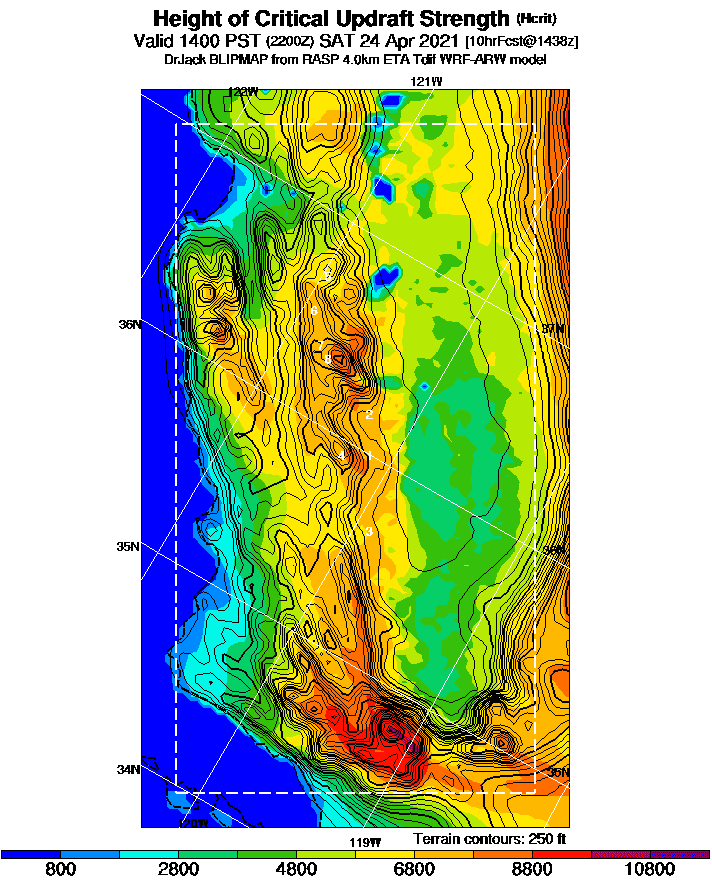 While the low level lift was suppressed mid morning and early afternoon, by mid afternoon the sun was able to give enough energy that lift could be found.  In spots.

Figured the the overcast would NOT kill the boundary layer lift, as long as the winds stayed close to the predictions.  Happily, BL seemed to be working as advertised. 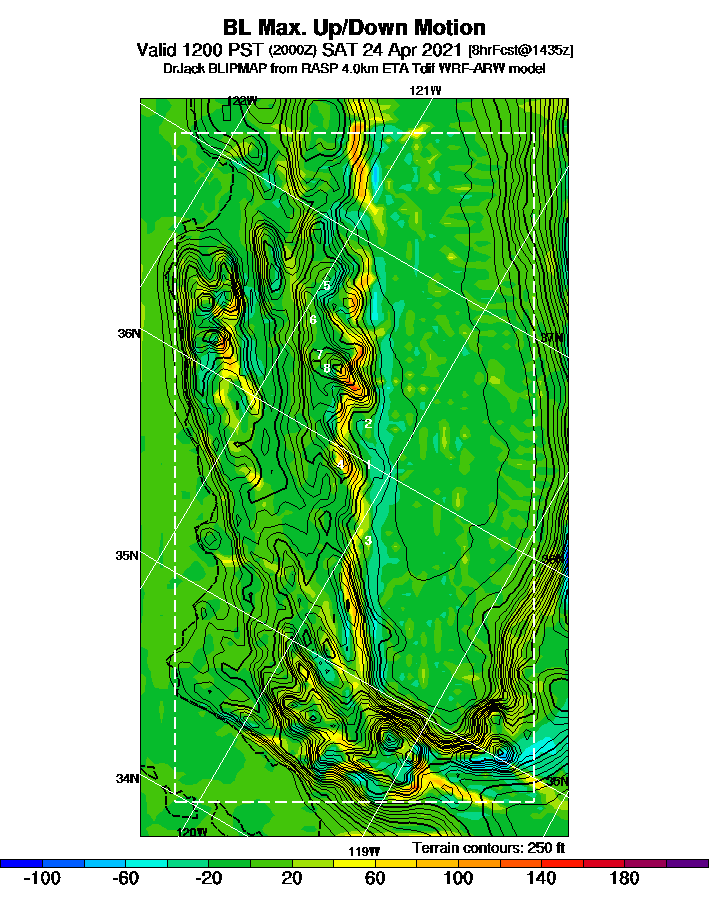 As an interest side note, there was wave action in the forecast, up high, but not down lower 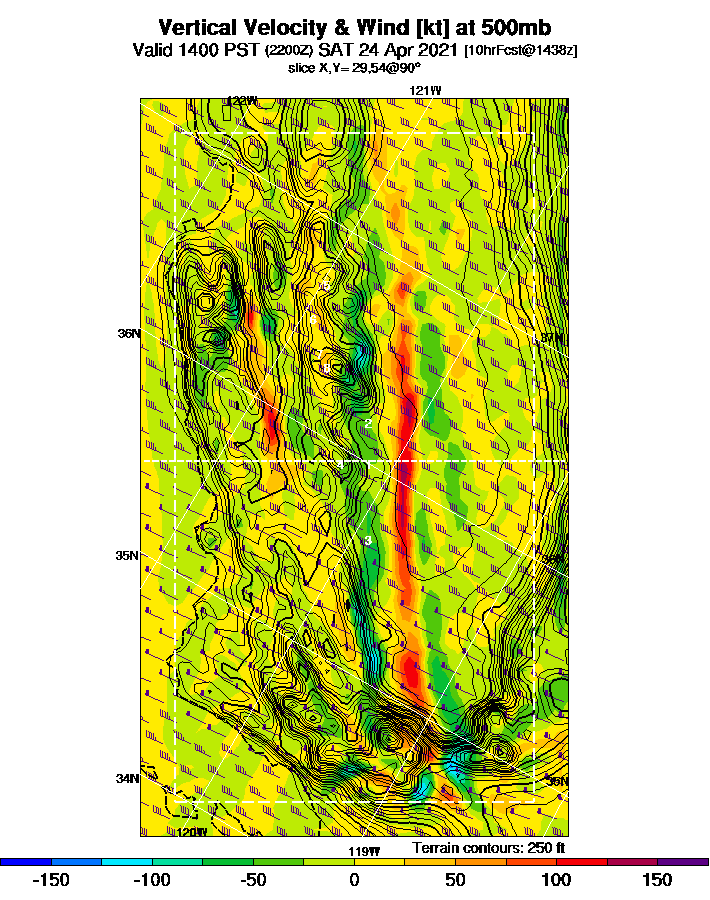 Sure enough, there was a nice long "lennie" where the forecast shows, but it looked to be around 20,000'.  The forecasts at the lower altitudes were showing no help to get there though, and it just remained an unobtainable sight to behold.

Nevertheless, I did hear Ethan report that he was in that area, finding good lift.

Early in the afternoon, there were several flights where it almost seemed like the glider was in competition with the towplane to see which would land first.  But the sun continued to fight the overcast, and in spots the sun would dominate.  Very few spots!  On the ground we could see frequent dust devils, very close to where the RASP had forecast the boundary layer, but they were mostly short lived and rarely went more than a couple of hundred feet up.  At least there's hope!

On to my flight:

Martin had flown the 1-26 a bit earlier, and reported that it was a rough tow, and lift was very erratic and sparse.  Karl had already landed and was waiting at Coalinga for an aero-retrieve.  Made sure to get a Tost weak link into the towplane so that Kyle could head straight to Coalinga after I released.  Heard Zach report a good thermal north of the gliderport, which was right on the way to Coalinga, so that's where Kyle takes me.

Released when I thought I had found that good thermal that Zach reported. Didn't pay attention to the altitude--I was in good lift and not that far from the gliderport.  However, I wasn't able to do much more than just maintain altitude.  Would have had an easy glide back to the gliderport, even against the wind, so went searching for something better.  Zach and I worked a thermal for a bit--sure was nice to have a good working radio so that I could confirm he still had me in his his sight when he was 6 o-clock low!  Earned some altitude, then not much more...time to try somewhere else.  Found more sink, now its time to quit the search head back to the gliderport.  Headed for a long straight-in to runway 12, at one point thinking I may come up short.  About two miles still to go, stumbled into lift and worked it.  Got up high enough that I could go exploring, and found more lift.  Heard on the radio, "the tree with a hundred cows around it" was strong, so I headed to it.  About a half mile still to go I hear that it went bust, so let's look for something else.  Headed for the solar farm and the area to the south of it, and maybe even get to the prison, which had been generating the biggest dust devils of the day.

A couple of miles west of the Prison I found some lift and got up to about 4700.'  Julie had reported that north of Tar Peak was working pretty good, so as long as I would turn to the gliderport if I experienced prodigious sink, I should be good to give it a try.  Tar worked like she had said, and then I continued along the ridge to the west.

The ridge didn't work that well, so turned towards the Avenal Valley, closer to the CUs.  The CUs seemed too close to the ridge line, still on the down-slope, to be wave, and definitely too far to be cap clouds.  Probably convergence.  No matter, they worked!  Got under the upwind side of one, and was able to climb to where a brick could almost make it back to the gliderport.  After I was feeling comfortable about having enough altitude to take care of any amount of sink I might find, I headed west towards 'awesomer' clouds.

At one point, about 2000 feet below the clouds, I noticed that I was "crabbing" in relation to the clouds.  I've seen this plenty of times in relation to the ground, but this was the first time I had ever seen it in relation to clouds not too far above.  I was headed west, I knew the wind was out of the SSW, but my target cloud had to be sighted about 15° to my left?!  Opposite of what I had always seen in relation to crabbing over the ground.  Accepted it, but didn't process why until on the ground--the clouds were in faster moving wind than I was.

Worked the upwind edge of several clouds, where the bases were mostly around 8300.'  Worked my way to the west edge of the short cloud street, and was able to ride upwind of the cloud to 8600' at one point, then yanked the stick back just to have the satisfaction of gaining another 100', for my short-lived max of 8700' MSL.

Headed south away from the cloud, towards Black, and found some of that prodigious sink, losing 1000' in what seemed like a minute.  No worries, though, was still at 7500' and only 5-7 miles from the gliderport.  Having fun, had plenty of altitude, so went looking for more lift.  Went to the southwest face of Tar, and it was working good.  Got a call from Martin that he and Julie were headed to the Burrito Barn, so reluctantly decided to head down.  But lift was great.  At 70 MPH the 1-26 was still climbing.  Nosed it over briefly to 90 MPH and was only losing about 100 feet per minute.  This is hard to pass up...burrito can wait!

Finally work my way down to landing at 6:09 PM  Never got further than Black from the gliderport, but it was a fun flight!

I want to thank Martin for getting the radio in the 1-26 working great!  Likely would not have had as long of a flight without hearing from others what was working.  Later in the flight I was able to give back to others some good information, and it was good to see them take advantage of it.  Great work, Martin! 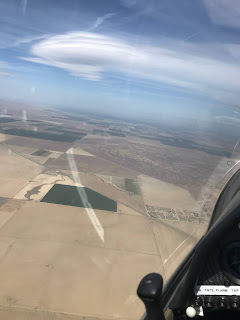