Another sweet winter day at Avenal.

The highlight of the day was Carl Lindren's first glider solo flight. 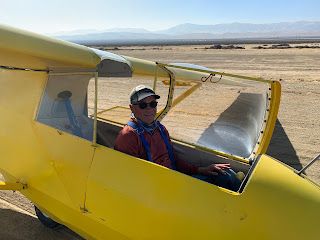 Carl Lindgren did some power flying back in an earlier era, but after many years away from aviation, started training this fall in gliders.  He’s been very diligent and focused in his preparation and flying.
Today, under beautiful clear skies and a gentle breeze at Avenal, that effort was rewarded in his first solo glider flight (and his first solo flight of any kind this century!)  I’ll bet that his memories of this one will be just a sharp as his first solo many years ago.

In addition, Piper and Kyle H were out for some post-solo spot landing practice and both did quite well.

Kyle D continued with his pre-solo training and is pretty far along the curve now.

Peter got in a few more "get acquainted" flights in 06 and made some very nice looking landings.

Zach and Jim did some work on the radio/charging system on 22S and Jim also devoted part of the day to maintenance and repair on tailwheels & wingwheels - not glamorous, but absolutely essential.

We also saw Alex working on 1B and Frank biking around shooting video and enjoying the day.

I'm sorry the farmers aren't getting any rain, but its sure been nice winter flying at Avenal lately. 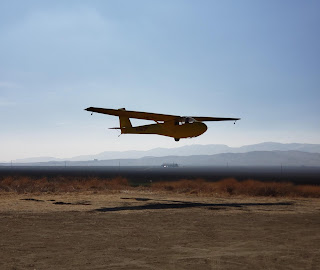