WEATHER
Visibility: Good, as long as you stayed away from thunderstorms to the west that had some rain and eventually, some lightning that hit the ground and started some fires up in the foothills near the big power lines that come over the hill from the  Diablo Canyon power plant. See pictures.
Wind: light and variable during the time we were out there. Slightly favoring using runway 30 for take offs. But we variously landed the gliders on runways 8, 12, and 30 depending on where we wanted to position the gliders for the next take off,  or to stow away for the day in their tie down spot, or hangar,  in the case of Ethan.
Altitudes: I think Ethan Ronat had the best soaring flight of the day, but I forgot to ask him how high he got though!
Time Aloft: Probably a little less than one hour by Ethan Ronat in his beautiful new Ventus 2.
Max Lift: Not sure, but definitely not very good!
Temperature: The highest I remember seeing was 103 deg. F. on the porch thermometer. But we left early, so it may have gone higher. It was quite humid for Avenal. So it felt oppressively hot!
Comment: The RASP forecasts were way off today. They didn't seem to get the mid level monsoonal moisture that came in from the south, mostly to the west of Avenal, and resulted in some thunderstorms with virga, lighting, and even a few drops of light rain at the airport by the time we all packed up to leave.
Tow pilot: Karl Kunz, all the way from Carmel!

We had had 4 CCSA pilots out flying gliders today,  and one CCSA pilot, Karl Kunz,  graciously flying  the tow plane after making the long drive from Carmel. 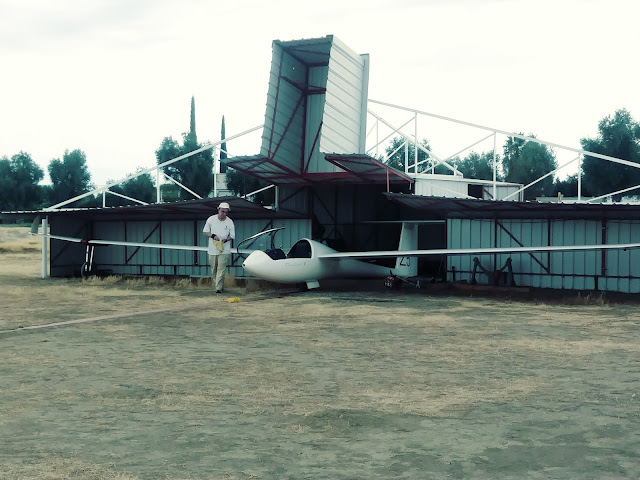 I won't say that I accidentally caught Ethan working on his in-flight relief tube system. Rather, at the risk of dating myself, I'll say he had just been unloading his turnpoint cameras, or had just been smoking his barograph foils.  This was the second day he flew his beautiful Ventus 2 sailplane. It was also the first day the new glider was put away in it's new glider hangar home at Avenal.  Ethan  had the only actual soaring flight of the day.

In this picture, you can see some smoke rising from 2 or 3 fires that had been started a little while before by some cloud to ground lightning strikes. The cloud that had generated the lightning strikes had already drifted away to the NW, parallel to the Diablo range. 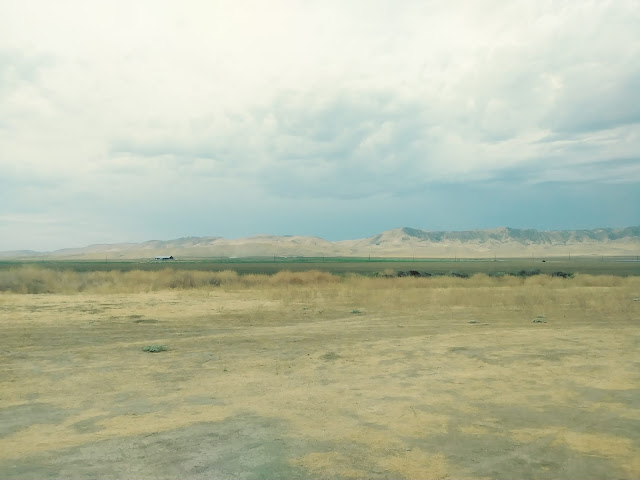 View to the SW of approaching weather that eventually formed some thunderstorms,  with some cloud to cloud,  and cloud to ground lightning. They still looked like rather "lightweight" storms, as those things go at the time this photo was taken. But just the same, it's always best to avoid those things by a very wide margin!  Fortunately for us, they never came directly over the airport,  and just slowly drifted north along the Diablo range 5 to 6 miles to the west of us. But I was told that later,  after most of us had left, the thunderstorms did form and drift over the airport area and that there was lightning and heavy rain reported right at the airport! 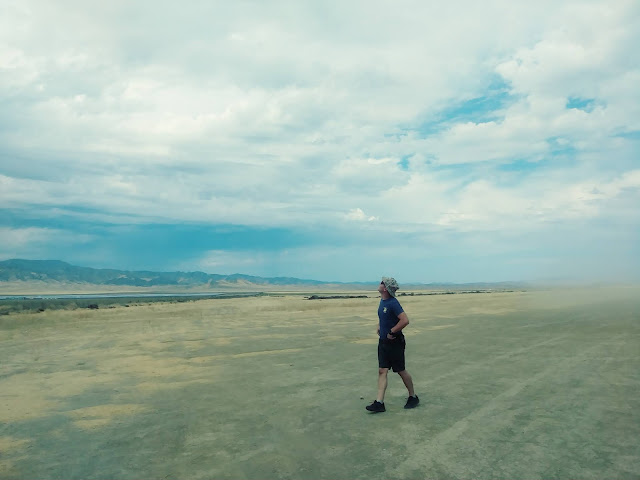 Kris Caldwell checking the weather after just running the wing of the 2-33 for Dan Clark.  (Note the dust cloud just to the upper right of the picture.) 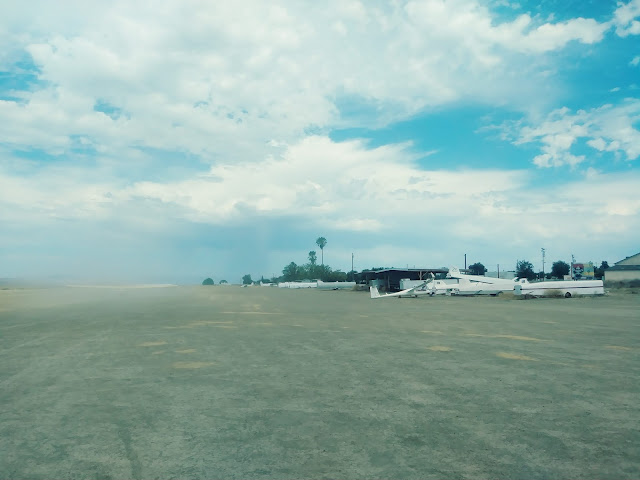 You can just make out Dan Clark taking off in the 2-33 in the dust cloud. Ethan is readying his beautiful new (to him)  Ventus 2 for flight near it's trailer.  His  ship has a beautiful finish. He has an amazing cockpit, with every electronic gadget for  enhancing cross country soaring performance currently available, all of which Ethan is very capable of taking full advantage of! 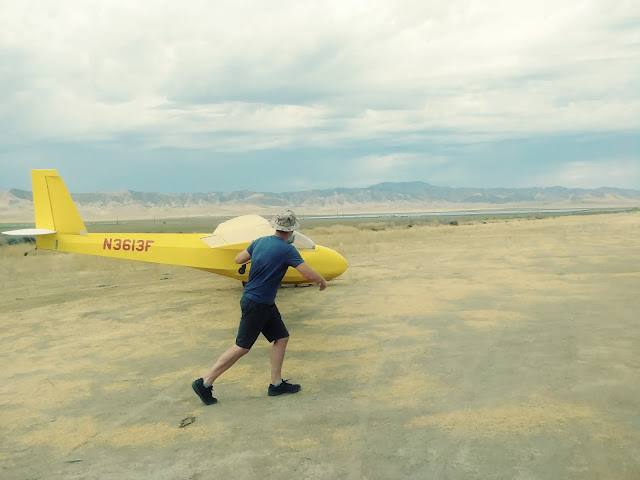 Kris Caldwell running the 2-33 wing for Dan Clark in the front seat. 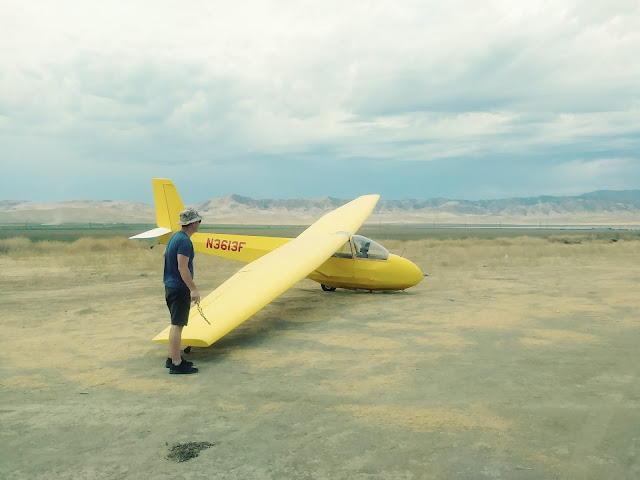 Kris Caldwell checking to be sure the pattern is clear, the runway is clear, the tow plane looks like it's Ok and the parts of the glider that pilot Dan Clark can't see are all A-0k, before running the 2-33 wing for Dan.  Wing runners have a lot of safety  responsibility! In Kris's hand was what looked like a piece of old tie down chain Kris found poking out of the runway. We've also found old electric wire we think was part of a runway light system back in the heyday of Avenal Airport when it was owned by Standard Oil and later Chevron Corp. 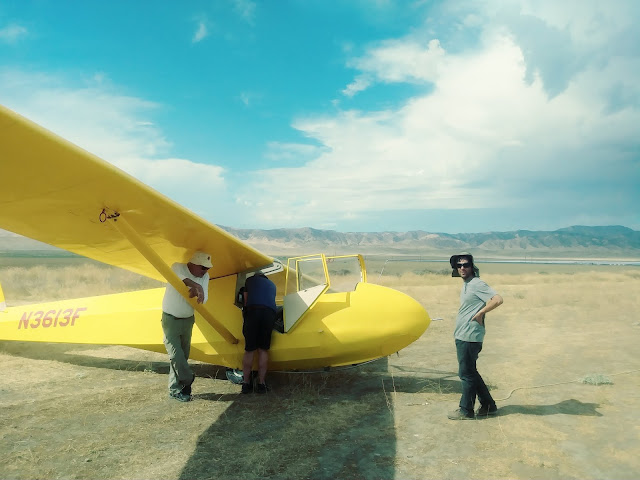 Some serious soaring, and other professional talent in this shot of Karl Kunz, Kris Caldwell and Dan Clark.  Kris is preparing to fly from the back seat of the 2-33 with yours truly in the front seat in prep for adding on the glider rating to his commercial pilot certificate.  Kris was getting some tips from Karl, a former line boy at the Fremont glider port, tow pilot, glider pilot and CFI, and recently retired 777 captain for United Airlines! Kris is currently  flying the F-35 for the U.S. Navy at nearby Lemoore NAS. It's very interesting, and always educational, to listen to those guys talk!

Posted by Alex Caldwell at 7:43 AM

Email ThisBlogThis!Share to TwitterShare to FacebookShare to Pinterest
Labels: pirep