Training: There were enough training flights to last most of the day. Three students in their training cycles included in order of their flights, were: Peter Suddjian, Jim Bell, and Beth Platz. Since these flights took place all day long in and around the cross country pilots, I thought it best to group them here to allow Julie's excellent prose to be uninterrupted.

Peter Suddjian is a long time power pilot from Fresno who is moving along in his training quite well. I expect him to be taking the tow unassisted in the next flight or two.

Jim Bell has had some power flight training many years ago and that shows in his capture of the skill necessary to fly well. As with Peter, I expect Jim to take the tow entirely in a few flights.

Beth Platz, an M.D. from Valley Children's Hospital, flew her second training flight and after that committed fully to joining the Club. She is now a Member in good standing in the Central California Soaring Club. She also is making good progress as I noticed small but important adjustments during her stick and rudder coordination, especially during thermalling turns. I think she'll be surprised at how quickly the flights will go right up to the day when I exit the glider and send her off on her own.


Sergio's Mother arrived today and Alex Caldwell invited her to rest on the patio while Sergio was soaring above. Here is Alex story:

Hi Harold,
I thought I'd write up a little bit on how Sergio Grajeda's mother came out on Saturday. She drove up to the gate and said she was looking for Sergio. Figuring this was probably his Mom but having never met her before, I introduced myself.  Her name is Maria. Sergio was up in the Orange  Crush and was getting lift and doing some soaring, so I sensed an opportunity. I invited her in to get out of the sun on the porch,  and when she did, I pointed up in the sky to the west, where Sergio was thermaling at about 2500 ft. AGL and having no trouble staying up. I said "There's Sergio, in that glider up there by himself".   Her reaction was "Oh my God!", with her hand over her heart,  and she seemed like she needed to sit down. I explained that he's flying very well,  and will soon be ready for a checkride for his license. I had wanted to give Sergio my wife's old cellphone today so he could learn how to run XCSOAR on it, but I had discovered the battery in it had died. But Sergio's Mom had gotten him one and brought it out to him.  It looks like it will work for XCSOAR, as well as being a reliable phone he can use for regular communication.
Alex Caldwell

The morning started with lots of people out setting up ships and completing pre-flight inspections before a pilot briefing on the patio. Only 4 pilots showed up for the XC camp, and we decided to set a task of Taft, Porterville, Avenal with the option to do a straight out to Tehachapi if it looked like there was a chance to make it.
Peter Sahlberg launched first in 181, then Julie Butler in XD, Pancho Herrera in 4M, and Martin Caskey in TN. Pancho was really excited about the first thermal he hit on tow and got off a bit early only to find himself needed a relight. 181 quickly climbed to 5000+ and headed south toward Dudley, getting there at about 3000'. XD followed behind, but on a little better line arriving at Dudley at 5000'. Not finding much there I decided to continue south toward a building dust devil - that was the last one I saw.  The convergence had already moved to the east and I missed the opportunity to follow it about 15 miles back, so I soon found myself landing at Lost Hills with a stiff cross wind. Hearing Martin at Dudley, I called for him to head east, but maybe a little late. After pushing off at the first taxi way, I saw 181 east of the airport fairly low and he soon joined me on the ground and rolled out to the last taxi way. As we pushed his glider off the runway, we saw TN east of the field circling. Unfortunately, he did not get my 'go east warning' soon enough and he eventually joined us at Lost Hills for a little party complete with a welcoming committee of wild Chihuahua mixes.
The stellar land out crews were rolling out of the Avenal airport by the time I called to let them know Martin had also joined us and they were rolling in just about the time we were ready to take off horizontals and wings. 4M must have heard our demise by the time he got to Dudley and made the choice to head back to Avenal so he did not have to set his glider up again tomorrow. 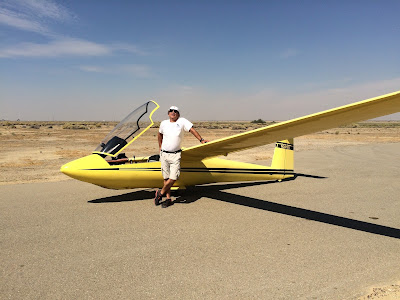 Peter Sahlberg after his first land out. 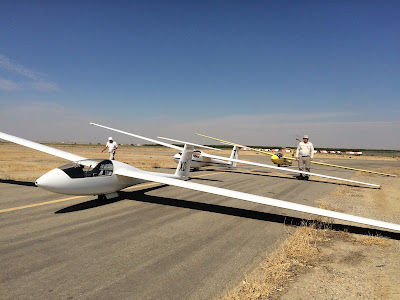 Land out party at Lost Hills; check out the wind sock behind Martin's right shoulder. 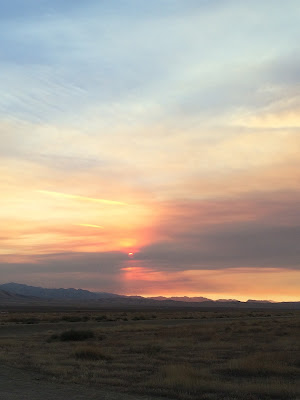 Beautiful sunset at Avenal courtesy of the Sobraneres fire.

Meanwhile at Avenal, Big Bird had problems with the wheel assembly and Jim Rickey spent the majority of the day fixing it. Once everyone made it back from Lost Hills in time for the massive wind storm, we helped Jim finish up work on Big Bird and headed out for burritos before returning to the club house for post-flight briefing and learning. Here is the post to OLC:
http://www.onlinecontest.org/olc-2.0/gliding/daily.html?sc=11&st=olc&rt=olc&c=US&sp=2016&df=2016-09-03

Sunday:
Many people camped out in Avenal Saturday night, so we enjoyed breakfast of bacon, eggs, and coffee on the patio. The forecast was a little more dismal than the prior day and no XC task was called. A multitude of people began work on various projects around the airport including clearing brush, cleaning airplanes, and putting Peter's SGS 1-35 back together following his land out. Jim Rickey went through the manual for the DG100 again before taking his first flights in that plane. 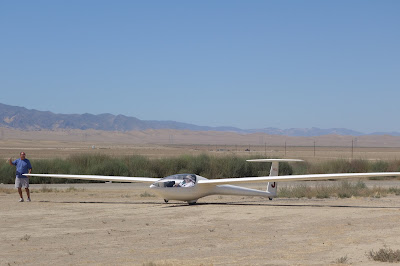 Jim is ready for take off.

Mario Pauda is waiting for the annual inspection on his new 1-26, so he flew the club's today. Harry Davies came out in his new Libelle 201 complete with awesome Cobra trailer and took 2 flights. Troy  Wollman and Jennifer Bauman took several flights in the 2-33 with Sergio, Luca, Jesse, & Andrew so that everyone got a chance to fly. Pancho also took several flights before putting 4M back in it's box. 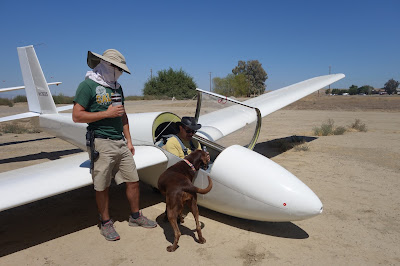 Lizzy makes sure Mario's cockpit is ready for flight while Troy gets ready to rob a bank or run a wing.

Mike Paoli was out working away, but did not get a chance to fly. Maybe next weekend.
Thanks to everyone who came out to play. It was a fun weekend with a lot of learning going on.