Leading up to the Clinic.

The initial task that Morgan called for Saturday was based on Friday's RASP forecast. The point of the task is to give everyone a common goal so it is organized a bit like a contest task.  While it wasn't a contest, it did help Morgan define a total distance for people to shoot for.

Completing the task, turning just inside the radius, participants would do over 300km.  That's a little over 5 hours at 60km/hr.  It should align well with conditions and keep the Hwy 33 airports within easy reach.

This could be a Diamond Goal flight with proper logging equipment, paperwork and turn areas.

Below is an image from Glideplan.  These are 25:1 glide rings around the key airports along Highway 33 with a 1000ft AGL arrival height in zero wind 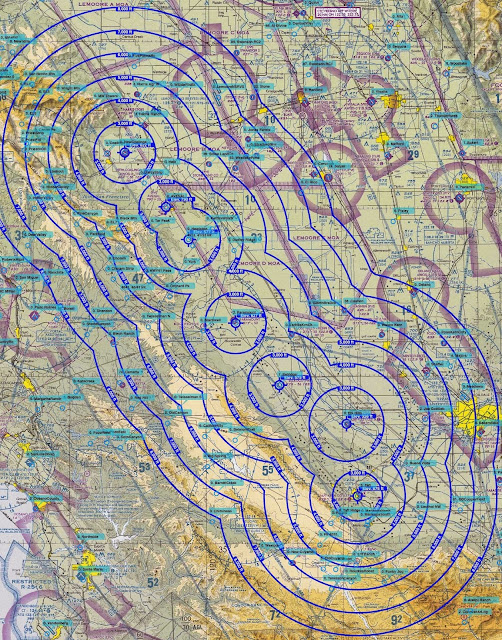 The quick read should make it clear that from 5000ft half way between any of the airports, you can most likely reach either.  Lot's of variables to consider and 25:1 isn't terribly conservative, but it's not unrealistic for a glass ship either.

When I arrived about 7:30 Saturday morning, there was already a lot of activity going on.  Several had stayed overnight Friday, and were working on their gliders early Saturday morning.


During the morning briefing, my partner lent me his Oudie navigation system.  The screen was wonderful but the XC Soar version was an upgrade or two from mine so it made life interesting at times!

I launched third but did not follow the first two into the Avenal Ridge, instead turning east and releasing in the Kettleman Hills.  I had some initial light lift but then found two crows and swiped their thermal.  Clouds were lined up toward the south, sweeping out to the east.  This was briefed in the morning but it was surprising to see how far to the east they were headed.

I ran down Dudley Ridge, pushing out to the east of I-5 until I could clearly see the town of Lost Hills, the airfield, the model airplane field and Paramount.  At this point, the lift was developing further to the east and there was no cloud along the highway.  I did not want to venture to the east so I retraced my steps and headed toward Orchard Peak.

I was greeted by smooth air and so I turned to the northwest and reconnected.  I used the cloud to push up past New Coalinga.  From there it was a nice return ride to Avenal.


I launched second, just after Jan in 7K.  My original plan was to release from tow near the field as there were many clouds that looked to be working.  As I was getting hooked up, Jan reported a 6 kt climb over the power lines at the mountains, so I changed my mind and took a tow to the mountains.

I released in a weak thermal at 2800MSL and quickly found myself losing ground.  Flying at minimum sink back to the airport and getting close to having to commit to a relight, I finally found a good thermal to about 3800MSL.  I continued working my way to the Kettleman hills where Peter in 181 was thermalling.  I reached cloud base at about 5K and pressed south remaining east of Hwy 33.

By the time I got to Hwy 41, Jan was also there and about 2 miles west of me.  I continued on under the clouds and ran out of them just past Dudley ridge.  With nobody in front of me, I wasn't really sure where to head next when Jan reported he was at Paramount and climbing.  I could see a dust devil in that direction so I topped out my thermal and made the leap into the blue.  I found a fairly friendly line of 2-4 kts down so was at about 2K when I reached Hwy 46. I found a good thermal just south of the road and reported it to Jan who quickly joined me.  Andrew (the silent one), caught us at this point as was apparently thermalling near us.

There were a few scattered CUs in the area, but a big street just over the Temblors.  I made a push for the mountains and got washed out and retreated to Belridge, where I felt like I spent most of my day.  The winds were blowing westerly and after three failed attempts to get up on the Temblors, I decided that if I tried to make the turn point, I probably would not make it back home.  Jan had made it up onto the mountains and was pushing on.

By then, I was back low 3 miles south of Belridge with the airstrip out of range and nothing but oil rigs between us.  I had a nice road picked out and was wandering at about 1000 AGL searching for lift, but ready to start a pattern in another 200', when I got a thermal. Two ravens joined me and we climbed to about 4800 and I proceeded East where the rest of the fleet was near Wasco.

There was a nice line of clouds to Wasco then north as well as plentiful dust devils in the valley.  I met up with Pancho in 4M as I was circling over Wasco airport and we headed back home together.  I was able to get some video of him circling in the last thermal I took about 30 miles south of Avenal.  The cloud street looked strong and I declared no more circling to Pancho and off we went charging back home.

Task was generally overcalled.  Forecast did not materialize per the RASP.  Marine push was much more extensive and earlier than the forecast.

Jule, Jan and Andrew led the charge with the earliest launches right around noon and headed out on course to the SE.  They ran out of clouds near Dudley Ridge as the marine air pushed through the 41/46 pass.  Pressing on, they had blue conditions to work for 20 miles or so down to near Belridge.

Carl in the Russia, Peter, and eventually Pancho, Karl, Martin and I all headed much farther east out towards Cashen and then Wasco following the clouds that were at about 6000ft.

Andrew got established on the clouds up on the Temblors and made it all the way past the turnpoint at Rourkes Roost.  Jan nicked the turn area, but pushed too hard and got low near Taft on his return, ultimately landing there.

Philip and I connected with Andrew near Taft and decided to run home together.  We found Karl inspecting Elk Hills from about 800agl.  He reports the runway in good condition.

Julie tried several times to get established on the Temblors from near Belridge and was washed out each try.  She headed back out into the Valley towards and beyond Wasco, connecting with Pancho for the run home.

Once beyond Wasco, conditions improve for a nearly continuous run from Cashen to EL5 and then back to Avenal.

Martin had an internal battery failure and ended up deciding to land at Delano.  Dennis and Jen performed a ground retrieve.

Jim gave Jan an aeroretrieve from Taft and then went to Coalinga for fuel and gave a Hollister pilot an aeroretrieve back to Panoche. Serious hero work by Jim all afternoon.

Traces are almost all up on OLC.  Pancho had a excellent flight down past Lost Hills, out to Wasco and then home with Julie all without a working flight computer.  Just old school pilotage and a sectional.  So his trace isn't available.

Thanks to everyone that helped run the line and Harold for towing.

We even got a thunderstorm and rain at the end of the day. 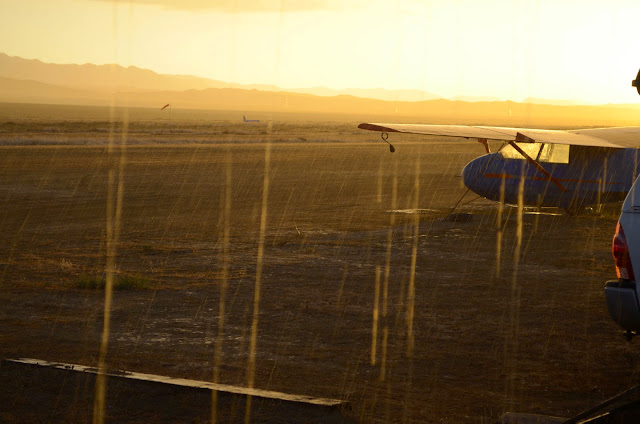 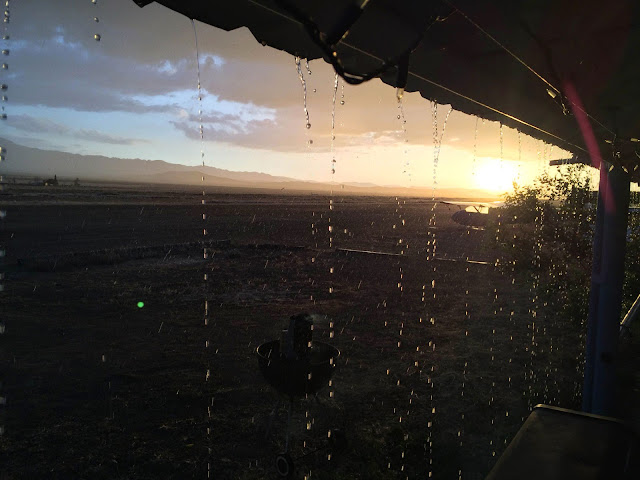 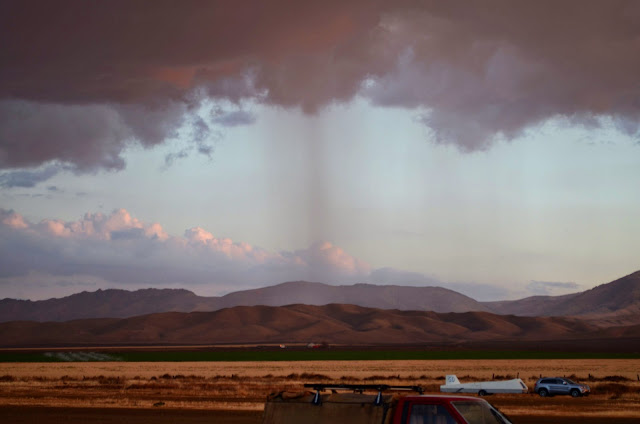 
Morgan offered to go up and "sniff" for rising air, and everybody accepted his offer.

I had noticed a little bit of "stickiness" at full up elevator on Saturday.  Just before launching on Sunday when checking my flight controls, it was more noticeable.  I checked with my two favorite mechanics (Martin and Jan) neither of whom liked the sound or the feel.  So, I grounded my airplane and spent the day eating, cooking and helping everyone else put their planes away as they returned.

With more Oudie experience under my belt I launched last.  A good bump led to release which led to two turns searching for the source of the bump.  The source turned out to be a real good piece of lift which took me into the Avenal Ridge.  I lost about 1,000 feet trying to get the Oudie to recognize a start, (it never did) and then headed out toward Orchard.  Looks like I need more Oudie practice.

Clouds were right on path so I was able to get and stay high.  Some would break up as I arrived, leaving the lift behind.  I ran to the south of Orchard, and then turned to try and nick the Paso Robles cylinder.  There were markers leading to the edge of the cylinder but they did not play fair, as there was no lift under or nearby.  I went back to the main cloud and climbed, turned north and worked the center of the cloud.

Past New Coalinga I saw a mushroom shaped mass, slightly higher than its neighbors and so I headed underneath, expecting a nice hit.  Once in place there was no up, no down, not a nibble.  So…that was it.  One thermal on the way home was used.  On the way back, several clouds quickly formed and died, leaving no lift in their wake.   An interesting lesson in convergence behavior.

They say you learn more in the first contest you fly than in all the practice leading up to it.  The XC camp carries the same feel (task call, brief, organized start) with the advantage of a supporting environment.  There was lots of information being shared when airborne.

A wonderful dinner, breakfast, flying conditions and friends!  A highly recommended experience!  Thanks to Morgan, Julie, Jim, Harold and anyone else involved in putting on this event