Meanwhile, Martin is figuring out the puzzle to put the Royalite interior panels back together.
Jan did not just work, work work, he had some fun, too.  Here has just landed after his flight. 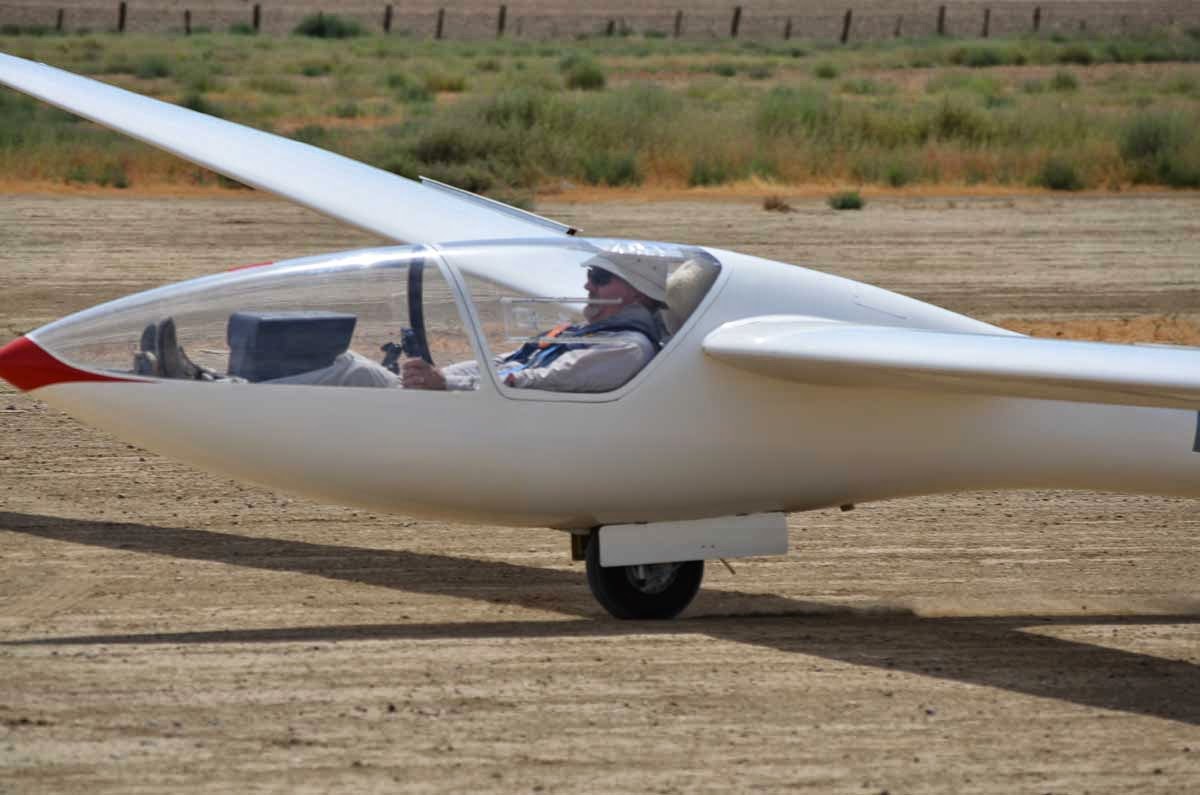 Andrew Ouellet surely had the most fun for the day--started out towing, then got a rear-seat checkout in the 2-33, then took the 1-26 up for a great ride.  Here is his story:

After towing for the early afternoon and a surprisingly enjoyable back seat checkout with Harold in the 2-33, I took the 1-26 up for my 3rd flight in it. Got off tow about 1700 AGL and spotted a dust devil moving on to the crop circle. Shot over to it at 1400 and took it to 5000 MSL then headed to the mountains, stopping to maintain my altitude along the way. I found a nice line of lift over Black at about 6000, and rode it to 9000. Then hopped out of the mountains just west of Coalinga. I wasn't hopeful for any lift in the valley as a high overcast layer had moved in and blocked out the sun, so at around 7000 I headed back to my lift lines and shot south down west of the prison, ending up at 10,400 at my highest point. The last hour and a half of my 2.5 hour flight was spent a little queasy - probably due to my near constant circling for the first hour of the flight trying to gain enough altitude to get to the hills and circling in convergence before I realized what it was. Anyways, after I decided I'd had enough flying for one day, I rocketed back to Avenal, ending up over the field at 6000. Then I took a detour around the prison, the Solar farm and the town and moseyed my way to the IP for an uneventful landing after a 2.5 hour flight. Highest flight yet and second longest duration. As expected, there was no lift to be found near the town because of the overcast layer.


Jim and Bart were nice enough to hang out until I landed and we all went for burgers afterwards.

Thanks to Yutaka for giving me the last tow of the day.


After getting his rear-seat checkout, Andrew takes the 1-26 up for a little ride.
But wait, there's more!
Looking to the northwest from in front of the towplane hangar, here are the clouds  the clouds that have come in, which Andrew talked about. 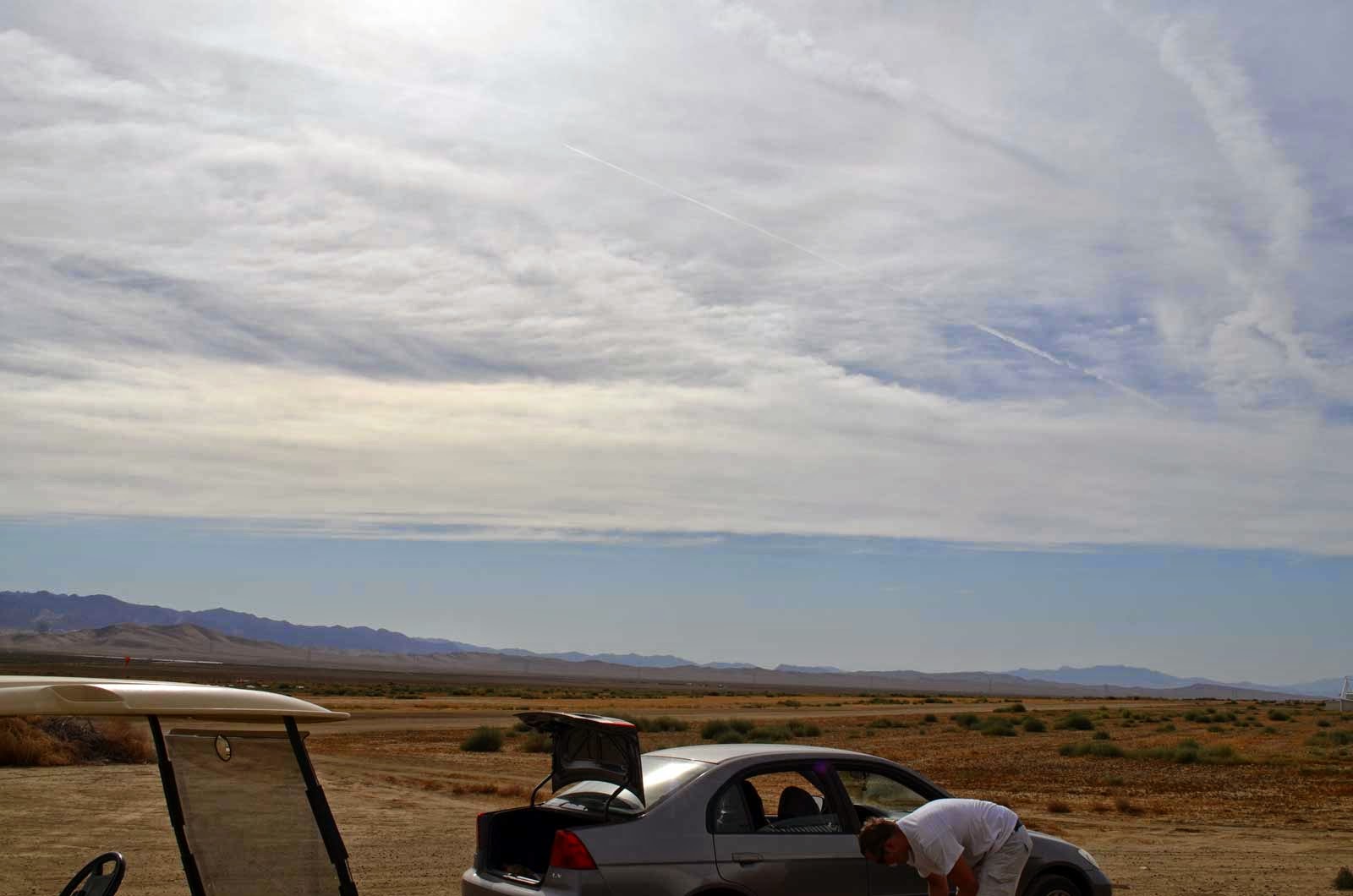 Jim Rickey took Orange Crush up for a ride.  Here is his story:

Took off about 3:45.  Did not find any great lift.  I did find a little bits of lift now and then.  Found one thermal near the circle crop that I was able to get a few hundred feet climb out of, but either it faded or I lost it.  Kept on working my way back to the gliderport as I got lower and lower, occasionally finding some bubbles to work.  The flight as a whole amounted to a slow descent--I probably got 15 minutes of time after releasing at 2000' AGL and calling it quits at 1000' AGL.

I flew the Russia again.  For the first hour or so I was looking for lift over the ridge, never getting high enough to venture further into the mountains.  I am blaming this on my thermalling skills being rusty after almost three months of not flying.  Eventually things started looking better, I got to the Black mountain, found a nice thermal not too far from the usual spot and pretty soon I was at 10k.  Then I flew to Parkfield, gaining another thousand feet or so on my way.  Then it was time to go head back to the airport, as I still had some work to do on the ground.

There was no landing drama this time. With the BRS installed and no parachute on my back, the CoG was far enough back to keep the tail down on the ground roll.


*  *  *  *
After Bart flew the Russia, he resumed setup of the weather station for the gliderport.  Here he is preparing the solar sensor.  At the top of the pole is an anemometer and wind direction sensor. 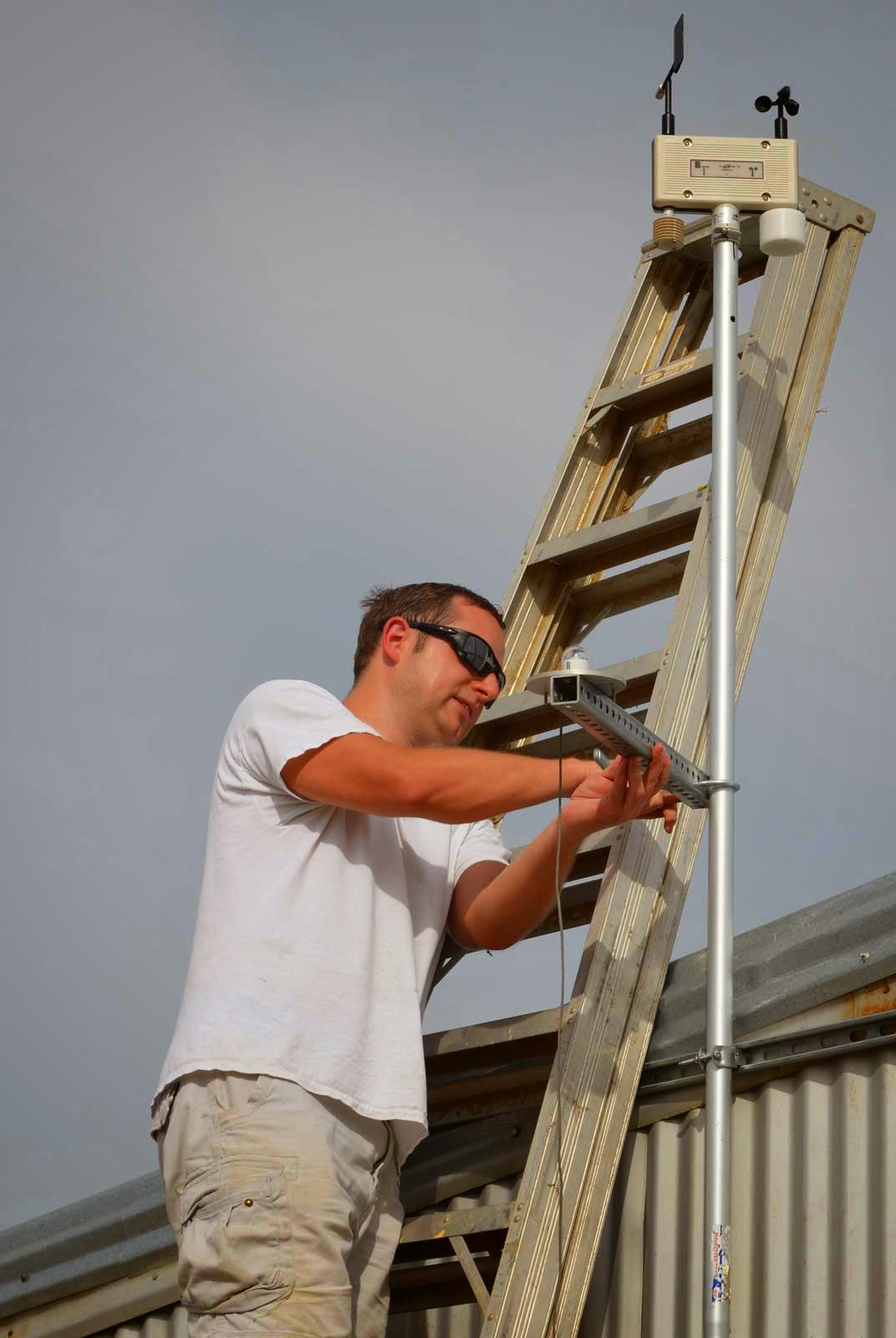