WEATHER
Visibility: Very good, almost unlimited. Some fog in the valley to the east early.
Wind: Very light all day
Altitudes: Release altitude -500 ft.
Time Aloft: .5
Max Lift: 1.5 kts.
Temperature: about 70 deg. F.
Comment: We got some very weak lift on a couple of flights and were able to gain about 300 ft. on one flight and hold altitude for a little while on the other.
Tow pilot: Nick Ferraro 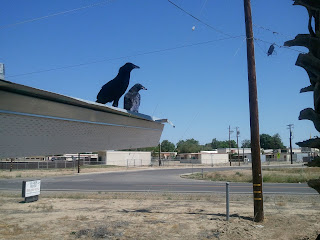 Some funky fledgling ravens on our clubhouse roof a couple of years ago. Maybe title should be fledgling ravens doing the "funky chicken"!  Not shy, in fact very curious, but being closely watched by their parents in the adjacent palm tree. 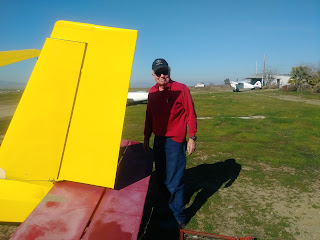 Steve Schery preflighting  "Big Bird", SGS 2-33 N3613F,  prior to completing his flight review. Steve currently flies a Carat motorglider, usually at nearby New Coalinga Airport. He has previously had both
Discus and  Russia sailplanes , which he's flown here and in Moriarity, NM. He is working part time at the NASA Ames Research Center at Moffet Federal Airfield in Mountain View, CA. He is a Professor emeritus, of physics, if I recall correctly,  from the University of New Mexico.  He is also a tow pilot with over 500 hours in Pawnees flying at Moriarity, and has also  towed  in our Cessna 150/150 for our club as well. He helped the club get our current tow plane set up to be legal to tow, which was no mean feat.  He also makes very good tow ropes and weak links.

Later, I flew with Alan Lewis and Lux Vadakan, both of whom made two flights and are progressing well. Sorry, I didn't take any more pictures. I saw Jim Rickey and I hope he may have gotten a few! Or maybe Richard Walker, who was also out at the field today. There was another couple there who's names I didn't get. I don't think they were flying.   We had some weak lift on some of those flights,  and were able to gain about 300 ft. one one flight.

Dan Gudgel came out and flew with Spencer Umney and Anthony Bellanti in 22S.  Thanks to Dan! He also finished the glider familiarization portion of the towing endorsement for Nick Ferraro.  I noticed everyone was pitching in helping to tie the gliders down at the end of the day, fueling and putting the tow plane away at the end of the day, securing the hangar, checking the water level in the golf cart batteries, cleaning the battery tops of dirt, and thecorrosion from the battery terminals, hooking up tow lines, running wings, retrieving and positioning gliders in the take off area, picking up trash, collecting tumbleweeds and other property maintenance chores. The operation seemed to go pretty smoothly with everyone helping out.  I'm not sure exactly how many tows we did, but it was at least 12, perhaps 14.
Posted by Alex Caldwell at 8:13 AM