Jim Rickey and Dan Gudgel started ops early in Hanford with towing the 2-33 back from it's annual inspection. When they arrived, Sergio was ready to take his two flights while before Dan left so there was an instructor on the field.
By the time Pancho, Lizzy, and I arrived, many people were already hard at work getting their planes inspected or doing work. Martin and Carl were completing an inspection on CZ with Carl's friend Dhruv observing. Joe was getting his PW5 ready for it's inspection under a very nice blue awning that provided some much needed shade. Karl was getting ready to pull GD out of the box and work on the flarm.
I dragged Pancho out in order to get the necessary work done on his trailer so it could get pulled back to the coast for more advanced trailer work. After getting that rolled into the hangar to escape the heat, we made a plan for the day.
Sergio bought some sound beef and made some amazing burgers for us all while Dhruv helped me fuel the tow plane. Allen decided with not very many people flying, I could handle the tows and he went home to air conditioning. We had a very nice lunch on the patio with all mentioned above, plus Dennis Lyons, Larry Johnson, Richard Walker, Mario Padua, and probably somebody else that I forgot.
Everyone got in position for tows at 1PM and off we went with Richard launching first in 181. It was pretty warm and there was a right crosswind, but we got a little height and turned parallel to the power poles and climbed slowly. Next up was Mario in the 1-26. I would call that marginal on obstacle clearance and I called ground to tell them to drag the 2-33 down for a 13 departure. I made one more tow off 31 with Karl in GD and switched ops to 13 for the last tow. I had dropped GD near red barn at 1100AGL and by the time we were ready to launch the 2-33, he was climbed through 5K on his way to Black. I never saw him again. See his story below. Carl's friend Dhruv had come out hoping for his first glider lesson. But, with the holiday weekend and at least one illness, there were no instructors on the field. So Carl graciously put away CZ and took him up in the 2-33. They released at 2K AGL and had a fabulous flight. I'm sure Dhruv will be adding a glider rating to his power rating soon. See Carl's story below.
Back at the club, everyone was busy packing things up and getting ready to head out. The forecasted temperature of 99 was far surpassed. When I got in my car to leave, it indicated 107. No wonder we were not climbing fast today!
I'm not as talented as Harold - so, there are no pictures of the day from me. Just imagine a lot of dust, everyone sweating profusely, and monster dust devils ripping through occasionally.

Here is Karl's write up:
Had kind of decided I would NOT fly on Saturday as it was very hot and very few were going flying, but since I had GD out of the box for some maintenance items figured what the hell might as well put it together and take a short flight and see if I got my Flarm working. Going north looked best on the RASP info Bart so kindly provided but there was a TFR over Curry Mountain (just east of Coalinga) due to a fire which was right in the way of the usual run north. The lift was amazing, caught a thermal between the solar farm and the crop circle and was in lift from there all the way to Black were I tanked up again and ran north and circled around the south side of the TFR and headed up near Hernandez Lake with all the EL fixes working as advertised. Coming back I went to the north side of the TFR heading back to Avenal for landing but literally was in lift most of the way back as the convergence was right down the Avenal valley. Hit a thermal so strong over the red barn (10-12kts) and was quickly back up near 10K so I decided to venture a ways southeast toward Dudley Ridge looking for some sink to get back to Avenal. The thermal heights were much higher than forecast and had I not have to take the long way home (Hwy 198 was closed because of the fire which looked like it was out) I might of stayed up a bit longer.

And Carl's write up with pictures:
One of my co-workers, Dhruv, was interested in a glider flight and start training towards an add-on glider rating, so he came with me to Avenal on Saturday to find out what soaring is all about. I was planning to fly my Discus while Dhruv started his training, but we ended up without any instructor on the field. Rather than let him bake in 100F+ heat on the ground while I flew, I took him up for a soaring flight in Orange Crush. We spent the first hour clawing up to 5,000 ft while I let Dhruv get a feel the 2-33's handling and how to thermal. We spotted a cluster of big dust devils east of the prison and headed that direction. Two strong thermals later, we found ourselves at 9,500 ft (and cold!)! From there, we went out to Black Mountain for some sightseeing and a couple more thermals. We made our way back towards the field and ran north and south a few times, with Dhuv doing a lot of the flying and really getting the hang of catching and centering thermals. As we approached the 4-hour mark at 6pm with strong lift still present, we decided Dhruv's first soaring flight should be Silver Badge duration and an Iron Butt Award contender flight. We then snagged another 6-8 knot thermal directly above a big dust devil in the crop circle; we were able to see down the center of it! After crossing the 5-hour mark, I showed Dhruv a couple stalls and a full slip to bleed off our remaining altitude before coming in to land.

Lessons Learned:
-A 5 hour first soaring flight is sure to hook anyone on learning to fly gliders
-The best way to cool off from the Avenal summer heat is to climb high and stay there
-The back seat of a 2-33 isn't a comfortable place for a 5 hour flight (but still fun!) 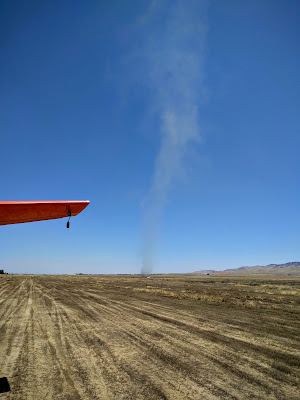 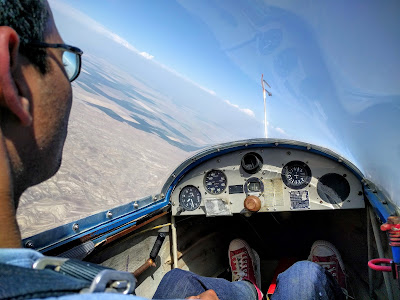 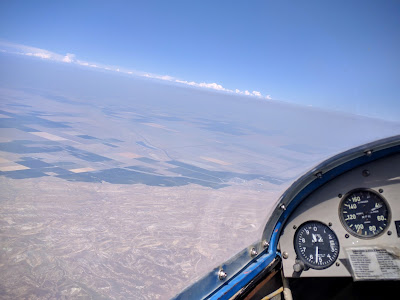 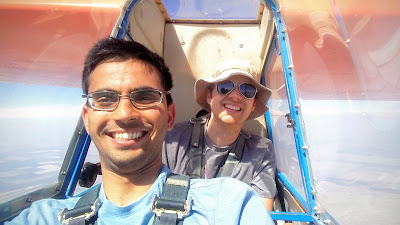