The egg is in Avenal!!!
Read about the PASCO egg here:
http://www.pacificsoaring.org/egg/ 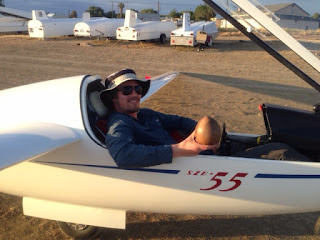 Today was forecast to be an excellent soaring day and glider pilots were signed up for it. But as of 5PM Saturday night, there was still no tow pilot scheduled. CFI-G Don Flinn offered to tow, but needed a check out in the tow plane. So, after rigging gliders Julie Butler went through a pre-flight, reviewed the tow pilot syllabus, and did some simulated and actual tows with Don and got him ready to pull up the waiting fiberglass ships. We pulled the first one up at 11:30 - Andrew Ouellet in SZ so he could start his push toward Byron. Great write up on this from Andrew below.
We got Joe Anastasio (PW5), Richard Walker (131), Morgan Hall and Steve (5H), Karl Kunz (GD) all launched before refueling and having Don launch Bart (Russia), me (XD), and Richard (131) again. He then did a handful of launches with students.

By the time I got up, all my friends had raced away. Except for GD who had headed north and was on his way back to Black Mtn where we connected and headed south together under a cloud street. There was virga ahead and we took a westerly line based on reports from the other pilots in the area, including 5H who passed us on his way northbound. I turned a few miles shy of Caliente Pk while GD continued on. We had been running between 9 & 10K, so when I got "really low" at 7000', I shared a thermal with TH out of Santa Barbara and climbed back up to cloud base and headed toward Coalinga. There were clouds stretching out to the west beckoning me to go toward the coastal range. I connected in a thermal with ER out of Hollister and we started heading west to where we could hear 5H, GD, and several Hollister pilots. At about 25 miles out of Avenal, I looked down at Hwy 25, remembered my land out in a field in that valley and subsequent long retrieve 2 years prior and decided to head back to Avenal. I made one more run to Orchard Pk and with my stick forward flying 100kts my vario was pegged at 10kts up and I couldn't wipe the smile off my face. But I headed back to the airfield and landed behind GD to rescue my dog from the truck. 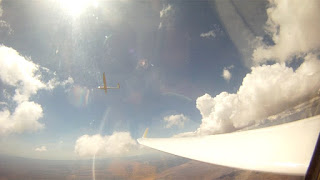 GD flying past the wing of XD

From Andrew Ouellet:
The most fun part of cross country flying to me is doing something new, whether it's going farther than ever before or flying over places I've never been.  Sunday's forecast looked quite good - good enough to 'easily' capture the PASCO egg from Byron and fly over some terrain I'd never flown over in a glider.  So, on Friday I coordinated with Ramy Yanetz to make sure I would be able to get a tow out of Byron after landing.  Sunday morning I had my liability release paperwork in order and decided I'd fly north and make the call over Panoche.  The flight north went without any trouble, reaching over 11k.  I thought about detouring around Mt. Diablo but it was already nearly 3pm so I dropped straight in the pattern at Byron.

After landing, I looked back over the mountains just south of Livermore and noticed the weak clouds I flew under had vanished and there was a nice blue hole over the San Luis Reservoir due to the marine air pushing through the pass, cutting off the lift in the mountains and moving it east to the valley.  Okay I thought, no big deal.  While the valley is likely to be slower, It's only 3 and I should be on my way shortly.  Unfortunately the guys at Byron seemed to have misinterpreted Ramy's email urging them to make my stop and go as quick and efficient as possible, even suggesting they have the egg brought to me at the flight line.  While I would never mind an extended stay and chat with fellow glider folks, some of which I have flown out of Hollister with, I had to get back to Avenal before the lift died out!  The guys at the flight line helped me tow my glider to the launch area, then suggested I park it and come with them to the club house for the trophy.  "You don't have it here ready for me to toss in the back and be on my way?" I thought, all the while playing it cool - "okay yeah sure let's head over there and grab it".  Sitting in the golf cart in the heat of Byron with the stress of changing weather south and the 160 mile flight home starting past 3:30 had my attention.  Of course, gas golf cart doesn't start and after a few minutes we end up walking to the clubhouse, which isn't any farther than the end of the runway at Avenal.  I grab the egg, have some water, hunt for a trash can for my snack wrappers then walk back to the flight line.  The tow plane is just landing with Marianne in position for her tow towards Mt. Diablo.  "Okay whatever I can wait another 15 for my turn, that's fine" I think to myself while still playing it cool not trying to be the guy who freaks out expecting preferential treatment.  Looking south I knew it was going to be a slower flight and decided to fly in the "just see how far you can get" mindset.

Finally the tow pilot returned and I was allowed to jump in front of a couple other folks waiting for tows.  Took around a 3000 foot tow south and let off in decent lift.  What looked to be over 100 miles of quite wide overdevelopment was centered over the west side of the valley.  I decided I better stay out in the spaced out cumulus forming over the sunny area of the valley, which took me way out East to Modesto.  All of a sudden while parked in a thermal only about 25 miles from Tracy my Flarm, power to my Oudie flight computer and my audio vario go dead.  I also smell smoke, but not super strong.  I flight off the master switch for that battery (thankfully my radio is on a second independent power circuit and battery) and monitor the smoke smell while parked in the thermal.  It didn't seem to be getting any worse so I carried on after reaching the height of the worthwhile lift and proceeded paralleling the OD, hopping from thermal to thermal with no high quality GPS source, no audio vario, and about 2.5 hours left on the internal Oudie battery.  But the lift was good over the valley, pushing me up over 10.5k!  "At least I'll be able to get halfway home" I thought to myself.  An hour and a half later, after milking 2kt after 2kt thermal paralleling the OD, which had turned into a major squall line of rain, hail and lightning, it was time to dive under the shelf and through the precipitation towards Harris Ranch.  Coming under the shelf, which started about 10 miles east of the line of hail, and about 15 miles west of Fresno I encountered an eerily smooth source of lift under the dark OD.  As smooth as wave, it was near hands off circling with me checking the altimeter to make sure the gauges were still alive. With my mechanical vario stuck perfectly at 4kts with not the faintest bump, I took that lift to 8000 and made my dive through the line of hail headed for Harris Ranch.  I was fortunate to have found the nice climb because it was up to 1200 fpm sink as I lost 3300 feet in 5 minutes covering only about 7 miles. My comfortable glide to Harris Ranch soon disappeared.  I decided if I could just make it through the sink to Harris, that would be a huge win for the day.  As Morgan and Karl had relayed over the radio, lift was to be found on the West side of the OD.  At 3000 feet and about 35 miles out of Avenal my flight computer battery finally died, but I had already gotten my distances and required safe heights plotted out on my SF sectional chart to make HR, New Coalinga and Avenal.  I decided to fly direct to New Coalinga and take it from there, but found quite a nice line of weak lift that essentially sustained my altitude past New Coalinga and all the way to Avenal, leaving me ample height to make the prison and return at redline for a celebratory low pass.  After 2.5 hours heading north and 3.5 heading south, I was mentally and physically fried but happy.  Julie helped me load my wings in the trailer and after chatting a bit, I packed up and headed home.

Quite a fun flight, but I wonder if I could have found that nice smooth 4kts of lift under the wide shelf of OD paralleling the squall line the entire way south.  I was afraid if I dove under and found nothing but sink I'd be out of luck so I opted to stay in the sun and chase mediocre looking cumulus grinding it out over the center of the valley.  Flying over the valley is quite a bit less stressful than mid-range on the mountains as fields and farm airstrips are plentiful.  This fact had me repeatedly switching from towable airports to the most conveniently located fields for easier retrieves the couple times I got low (only once down to 2500 near Tracy and then in huge sink north of Harris Ranch).  While I was internally anxious over the laissez faire sense of time on the ground at Byron and kept it well hidden, I'm sure if I had mentioned I was in a huge hurry they would have promptly got me on my way - I mean no criticism of them, just tried to convey my feelings at this seemingly pivotal period in time. 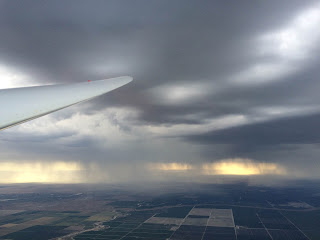 Getting ready to punch through the hail and 1200 fpm 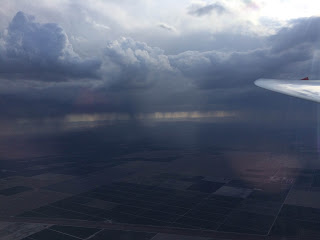 Getting ready to punch through the hail and 1200 fpm sink 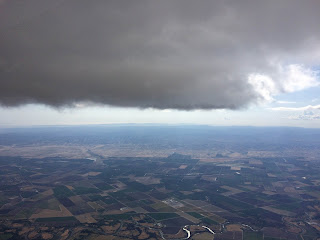 Heading south towards the beginning of the OD 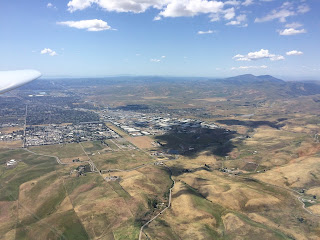 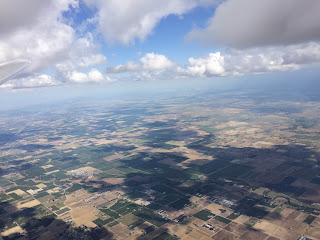 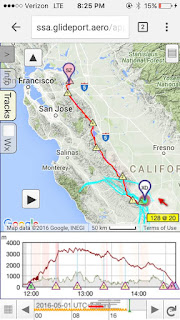 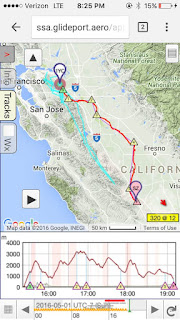 While Andrew was out flying, other launches were going on and Jesse took the role of official shade provider. 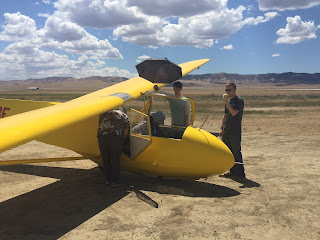 And the clouds kept building... 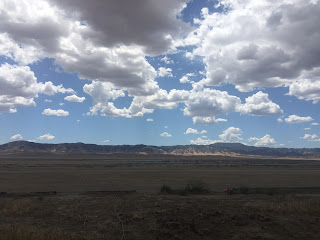 The view from Jezebel as Dennis Lyons departed Avenal for home. 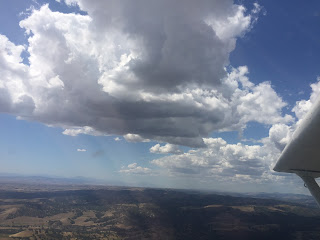