WEATHER
Visibility: Hazy but more than 25 miles most of the day.
Wind: Calm mostly but a slight East crosswind in late afternoon.
Altitudes: Only tow height or maybe a foot or so above.
Time Aloft: Alex Caldwell probably set the time record today of about 30 minutes or so.
Max Lift: Likely about 100 feet per minute but rare.
Temperature: Mid 70's, a beautiful Fall day at Avenal.
Comment: Three solo students today, tying a record set ten years ago, 9-24-05.
Tow pilot:  Dan Gudgel, Julie Butler, for a total of 21 tows, a very busy day.
TO SEE A LARGE SIZE OF ANY PHOTO JUST CLICK ON THE PHOTO AND YOU WILL SEE A SLIDE SHOW OF ALL THE PHOTOGRAPHS.

Note: All the best photographs were taken by Jim Rickey, the rest by me and one by Joe Anastasio.

It was quite an amazing day for student flying and solo. For the first time in 10 years, three students soloed on the same day. Who were these people? They're from the newest and most active group we have had in the club in years. Cal Poly!!! Yea team!!!

These fine young men and woman are a wonderful asset to our club and to society in general. They are going to be the leaders in technology and community in the not-too-distant future. They bring excitement, ambition, laughter, intensity, brainpower, creativity, and whatever else we can say about them. Each of these great young people are very different from one another but in many ways, so similar. Our club hasn't been this fortunate with such new members as a group in a long time. Of course we have had and continue to have new students that are excellent additions to our club. Lately we've seen Clark Woolf, Tyler Bishop, Roman Franco, Sergio Grajeda, Ed Mandibles, Harry Davies, Jamie Strickland, Steve Valentine, Rick Eason, Philip Gerfaud, Kavin Gustafson, Skip Breidbach, Mario Pauda, and others over the past year join our club and begin their training as individuals. And we're grateful for their presence in our club. But it's tough to beat the group known as the Cal Poly Pilots, for adding members at a torrid pace.

Most soaring clubs nationwide lament the fact that there aren't any young people coming into soaring. But, here at the CCSC, in a matter of just a few weeks, the Cal Poly group has changed all that for our club. We now have seven new members, all but one are solo pilots as of today, and looking forward to soaring together in the coming months. Here they are: Jennifer Bauman, Troy Wollman, Kyle O'Connell, Andrew Palmer, Griff Malloy, Luke Bughman, and Neiman Walker. CONGRATULATIONS EVERYONE FOR ADDING SO MUCH TO OUR CLUB!!!!

We can't forget Harrison King and Ethan Lawton who came out last week. Harrison had his first training flight but Ethan chose to just get acquainted with the club and the flight operations.

The day started off with several people sanding on Big Bird: 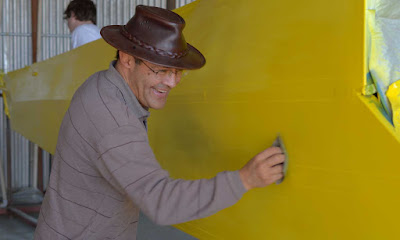 
Christian Heidgerd, an NAS Lemoore pilot is back again after a lot of fighter flying. He visited us on July 11, 2015, to renew his CFIG and we hope he'll get back current again so he can help out here at Avenal when necessary. He's in the photo above, and below holding the right end of the weak link. Christian worked with Dan Gudgel this morning on towing, and is planning on becoming another CCSC tow pilot.

It was a great day for all these fine young people from Cal Poly and they have started on a path in their lives that one cannot predict how far and how embedded they will be in the world of aviation. Becoming a pilot changes one's life in ways that are positive and with a whole new way of viewing our world. At the Air & Space Museum, some years ago, they had a documentary film titled, "To Fly", not shown any longer but I have a copy. Here is some of what was narrated in the film*:

"...Throughout human history we have struggled to move ever more freely about our world. Our conquest of the air began with the first balloon. These flights suddenly gave us a whole other way of seeing. It was like the opening of a new eye.

Our new vision has changed our very comprehension of our land. From up here, we see a country different from anything known at eye level in the world of the horizontal. This development of mobility and rapid transport has no parallel in all human history.

... We first flew in dreams. And the dream of flying has become real. We have extended our limits and seen our world from a new angle in a way that once would have seemed god-like.

We have come a long way from the time when people gazed enviously at the birds in flight. Today we look upon our planet from afar and feel a new tenderness for the tiny and fragile earth. For we know now that even as we walk upon the ground we are ever in flight throughout the universe.

And so we begin to realize that human destiny has ever been, and always must be, To Fly!"

Today was fast and furious and most of all, fun. Thanks everyone.