WEATHER
Visibility: 10+ miles
Wind: light and variable
Altitudes: 8,000 msl (10,000 msl down near Frasier Park)
Time Aloft: 5.5 hours
Max Lift: 10+ kts
Temperature: 80's
Comment: Beautiful day marked by clouds
Tow pilot: Peter & Alex & Harold & Jim
It turned out to be a busy day for demo flights. As Julie mentioned below, the only 2-33 flying was flying every hour until I left at 6:30 pm.

First up was Rick Eason who likes to train early in the cool air. Dan Gudgel had asked me to get to Avenal earlier than I would have otherwise because by last evening at 10:00 pm, no one had volunteered to tow. That's pretty disappointing because we have a fairly long list of pilots who have been checked out in the tow plane and one would have thought someone might have offered to tow. So I got there early and by that time Peter Mersino had also arrived and mentioned that he had signed up to tow last evening at about 10:30 pm.


Meanwhile the good guys worked on the Big Bird adding interior panels and outside panels in hops the glider would be available sometime before December.

Here's a rundown on the new people who came out for a demo flight. Alex was flying with Scott while Scott's dad, Robb waited patiently. Alex must have done three or more flights with Scott. In fact, all afternoon, Alex and I traded off, I'd tow for his demo flights and he'd tow for mine.

My first two flights were training with Tyler Bishop who is trying to move forward with his training to have his license by the time school begins in the Fall. Our first flight was off tow at 3000 msl and we did a few maneuvers as well as thermaling and practiced once again simulated rope breaks. The second launch was a simulated rope break at 200 agl, and although he thought he was being helped by me during the maneuver, I was content to watch him do it alone, and he did very well. That was a good way to end the day.


Steve Valentine found time to come out on his beautiful Indian motorcycle and we went up for a nice flight. He gets the rust out in the first half of the flight, then does well later on. If he came out more often he'd find himself moving rapidly towards solo.

Another set of demo flights arrived about noon, Ted Lawrence, his twin children, Alexi and Brent, both 15 years old were excited about the flight. First up was Alexi who informed me she would like to become a pilot soon and based on here excitement during the flight, she will make a very good pilot. Our demo flight didn't last too long with the lift leaving and the sink moving in. But she enjoyed it completely. Next up was her twin brother, Brent, and while the lift had returned by that time, the heat and the circling forced us to return to the field sooner than anticipated. We hope they both return someday when the weather is cooler and the lift is stronger

Alex next up with two young kinds, Micaela and Logan Cors, who live in Tulare. Their Dad, Christian, has been Alex friend for some time. The two kids had a great time with Alex and the lift was available most everywhere, most of the time. However there were periods when the lift moved somewhere else and one demo flight was terminated earlier than expected due to lack of lift.


After Logan and Micaela's flights, Alex and I traded off again, he towing, me flying. This time it was with Christian Heidgerd, originally from Boca Raton Florida, now living in Lemoore. He earned his CFIG three years ago but hasn't renewed it so it will take another checkride with Dan Gudgel to get him current again. We went up for a nice flight, and thermals got us to well over 6000 msl. We could have gone a lot higher but they needed the glider on the ground for another demo flight. Christian will be back again, soaring and renewing his Instructor rating.


I thought we were finished for the day but along came Sergio Grajeda, an Avenal resident, who has been watching gliders for years and wondered what it was like. In fact, he's never been in the air before so this flight with him was a real treat. Since Alex had to leave with the Cors family, Jim Rickey offered to tow the last flight of the day. Thanks, Jim.

Now for the exciting long distance stories, first my Julie Butler, then by Morgan Hall:

When Morgan and I arrived at the field, Jim, Martin, and Jan were hard at work on Big Bird, the 2-33 was up and down with multiple people at the controls, and Andrew had just launched. The day was already going with clouds marking routes north and south. We quickly assembled XD and 5H, completed pre-flights and PCCs and got our cockpits ready to go. With everyone focused on training, there were not many victims for the back seat of the Duo, so Ethan opted to jump in rather than pull his glider out of the hangar.
I released just south of the field, climbed to 3500 and headed to Tar where I was able to connect with the clouds and get up to cloud base while waiting for Morgan and Ethan to launch. We planned to head south together and once they got up, we headed out under the clouds. Just as we were leaving, I heard Andrew entering the pattern - turns out he managed to get sick and had to cut his day "short" after a very nice 2 hour flight. I opted to turn around just north of Caliente Peak while 5H continued on to Conover. I ran with 5KM out of Hollister from Blackwell to Black Mountain before deciding I wanted to climb. After getting back up to 7500, I continued north to the San Benitos where the lift was a little weaker and I got a few rain drops. 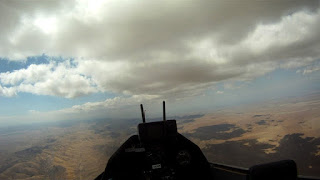 
Julie and I were supposed to fly in the Glasair up to Seattle.  The combo of rain moving into the Pacific Northwest and epic looking conditions made it easy for us to decide to go soaring.

Ethan and I launched shortly after Julie and got off tow at 1200agl in a decent thermal and took that to 3800 or so before heading to the hills where we found a 8kt climb to cloud base at around 6500.  We used that to cut the corner to the Avenal Hills and tried to connect with Julie in XD.


We ran with Julie for the next 40 minutes or so.  Mostly her in the lead, she is quick in the new Discus.  Nearing Caliente we had got a bit out in front, she opted to turn back.  We pressed on to see what lay further south.  Bases were only about 8k.  Not real high considering the terrain gets into the 6-7k+ down in the Sierra Madre and Sespe mountains.  We made a few turns with 5KM trying to get a few pictures near New Cuyama, then headed south, only stopping for a climb after crossing the Cuyama River near Cuyama Peak.

That climb was to about 9000 and was our last thermal of the day.  We flew the next several hours just working the energy lines, swapping PIC duties every so often.  Over 300km without a circle.  We pressed another 25 miles or so to the east overflying Conover and then out towards Pyramid Lake.  At 115 miles out from Avenal we turned around, there were no more clouds and bases along the Tehachapi range were lower.

We backtracked along the convergence line, never needing to thermal.  Getting down into the upper 5k range a couple of times, but always getting back up.  With the line looking good along the temblors and up into the San Benito range, we pushed north as far as we dared, not wanting to need to circle.

We turned just south of Hernandez where the rain had softened things considerably.  Ran for home and had to duck out into the marine flow near Hewiston to get down for landing.

Possibly my lowest circling percentage ever.  According to the OLC, just 9% over 4:40 flying time and allowing an average speed of 118kph.  3rd fastest in the country for the day and only behind two pilots flying out of Ely with probably a 7000ft height and true-airspeed advantage.  Gotta love a strong convergence line.

Thanks everyone for coming out to Avenal and making the day one to remember. We hope to see at least some of you here again next week.