Now, on to the day's flying  Allen White has the towplane pilot duties for the day.

Morgan is the first glider up today, giving a ride to a lady who won it at a benefit auction.

Carl Engel had a good flight in the 1-26 while I was on a fuel run.  I did get back in time to catch his landing.

After helping with the Orange Crush annual in the morning, I took up the 1-26, launching just before 1pm.  While on tow at 2,600' MSL, we hit a strong thermal over the crop circle so I released and rode it to 4,100'.  Morgan recently was coaching a few of us on how to release in thermals and use those to climb vs being dragged up by the tow plane.  His insight was perfect, as my flight trace shows my climb rate in that first thermal equaled what I was getting on tow!

After running back and forth between the crop circle and the tanks working thermals for a while, I worked my way to the first ridgeline.  I found some more lift there, so then I cautiously made my way towards Black Mountain, making sure I had comfortable altitude margin to make the glide back to Avenal (judged by a combination of XCSoar and TLAR).  A couple times I had to turn back to stay within glide, but then found good lift to allow me to try again.

As I was about to connect with the closest part of the ridge going to Black, I checked the time (3pm), and realized I was supposed to be on the ground about to leave for home for an evening commitment I'd made!  I bee-lined back, with plenty of altitude to spare.  Flight duration was 2.3 hours and max altitude was 5,200' MSL.  I easily could have stayed up longer, and probably catch lift off of Black to get higher as well if I didn't have to leave, not bad at all in the 1-26.  My best flight to date, and one that teaches not to make plans where you need to leave mid-afternoon!

My OLC trace is here: http://www.onlinecontest.org/olc-2.0/gliding/flightinfo.html?dsId=3787426
I've also attached a sreenshot of the GPS trace colored by altitude, which provides some additional insight into the flight.  This was created by a 2nd GPS/baro logger device I was using that a couple friends originally made for logging skiing and hiking. 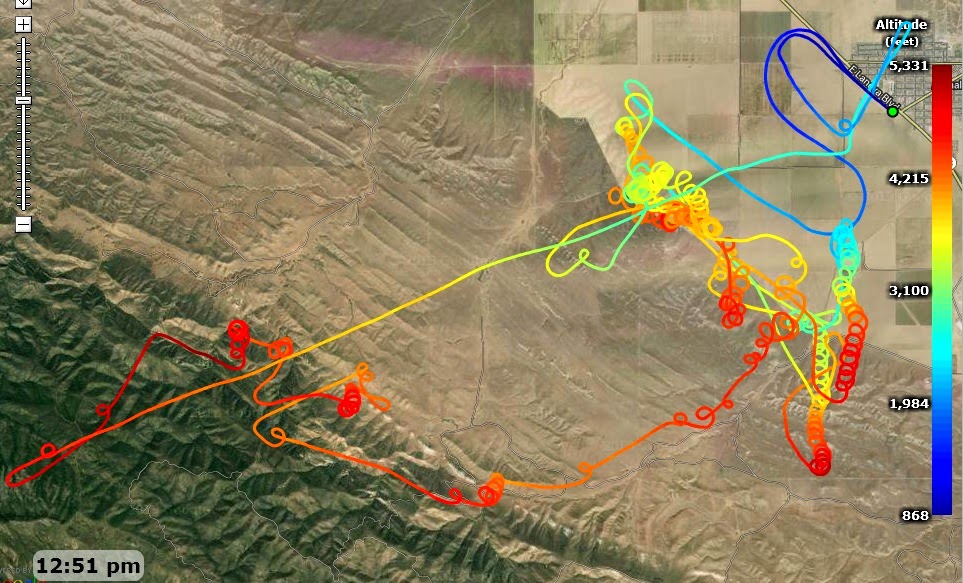 Alex gave a demo ride to Frank, who is trying to gauge his interest in getting a glider rating.

Here is Alex's report for the day:

"I flew 3 flights with Edo McGowan who drove all the way up to Avenal on Friday from Santa Barbara, a drive of 5 hours.  Edo spent the night Friday night at the club house." 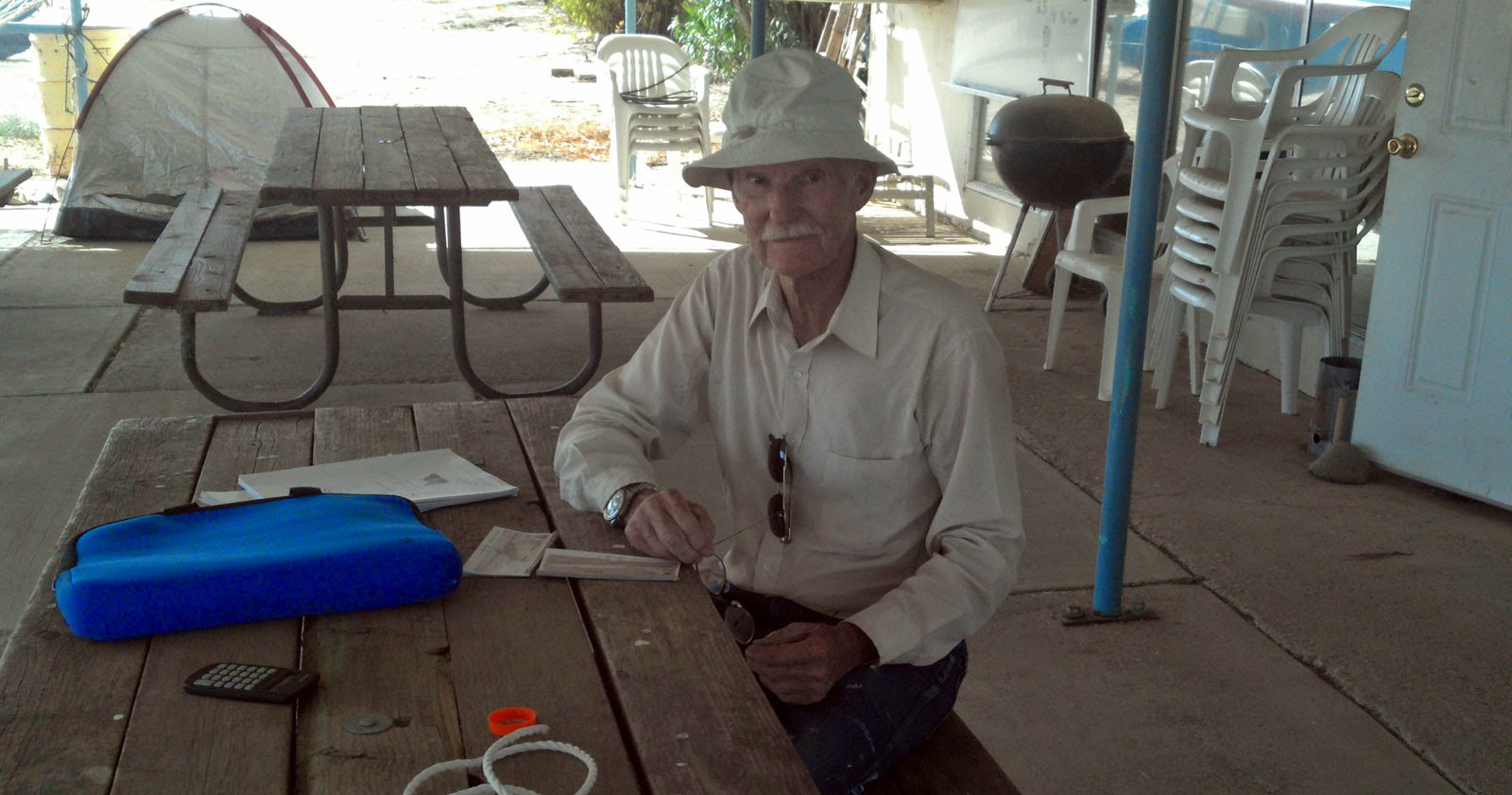 "Edo is doing great in his flying, he is doing the tow completely on his own, as well as the pattern and landings. He has a lot of power time and owned his own aircraft in the past.  He has also flown gliders at Santa Ynez, and had done some winch launches at Los Alamitos Naval Air Station in Long Beach under a long term CAP glider program they have had there for many years.  We did a lot of thermaling and reached a max altitude of 4800ft. MSL."

"Craig Gifford flew 2 flights in Big Bird.  On his second flight, he reached 6700 ft. MSL, which was the highest altitude anyone achieved out of Avenal today, including Morgan in H5, who got to 6300 MSL.  Craig also stayed up for 1.7 hours on that flight which may be also the longest flight of the day, although I'm not sure about that."

Jim reports:  "I lost sight of Craig several times as he had his great flight.  On the ground we could see great dust devils, including one near the red barn that was larger at it base than the red barn, and obviously had a lot of strength.  After landing Craig started to put Big Bird away, and I asked him how conditions were.  He said he had to land because he couldn't find any more lift.
I figured there was not much point in me going up, although Alex was still up in Orange Crush doing well.  Morgan talked me into it, saying, something like, "at least you'll get some tow practice and accuracy landing practice.  Turned out that was what the flight amounted to.

I released at 2000' AGL north of the gliderport.  Did not find any significant lift, just enough to slow down the descent.  Alex was southwest of the gliderport and well above me, so I started heading over in his direction.  As I was passing the gliderport Alex was still well above me, and appeared to be climbing.  (Best guess is he was just not descending as fast as I was.)  As I was approaching the big red barn, at just a little over 2000' MSL, I decided I was not going any further, as I was not seeing any signs of lift.and had headwinds to get back to the field.  I had only about a mile to go to get where Alex was, a thousand feet or more above me, but would have had to depend on finding lift that that I did not have confidence was there.


Got to practice that accuracy landing Morgan promised me, and did pretty good.  Alex and Edo landed not long after I did, which confirmed that I made the right decision not to chase their lift.
After the flying was done and all the gliders secured, we directed our attention to the windsock.  Those of you who have been out in the last month may have noticed it was not performing like it should.  Only one of the metal grommets that are used to hold the sock to the ring was still in the fabric, the rest of the metal grommets had torn out of the sock.
Alex wrote, "We noticed the wind sock looked kind of floppy today, and discovered it had torn loose from the ring on which it is mounted so it was not able to fill properly with air.  A team was dispatched, and a field repair was made. It is now working properly, although it looks like it will need to be replaced at some point in the not too distant future, having been exposed to the brutal Avenal conditions for the last few years.  Steve Schery is the one who originally installed our current wind sock.  The pole and mounting are a legacy of when Chevron had the field and like many other structures at Avenal airport, appears to be made of old oil field pipe and some rebar recycled in a quite clever way."

And here is the windsock after repairs. 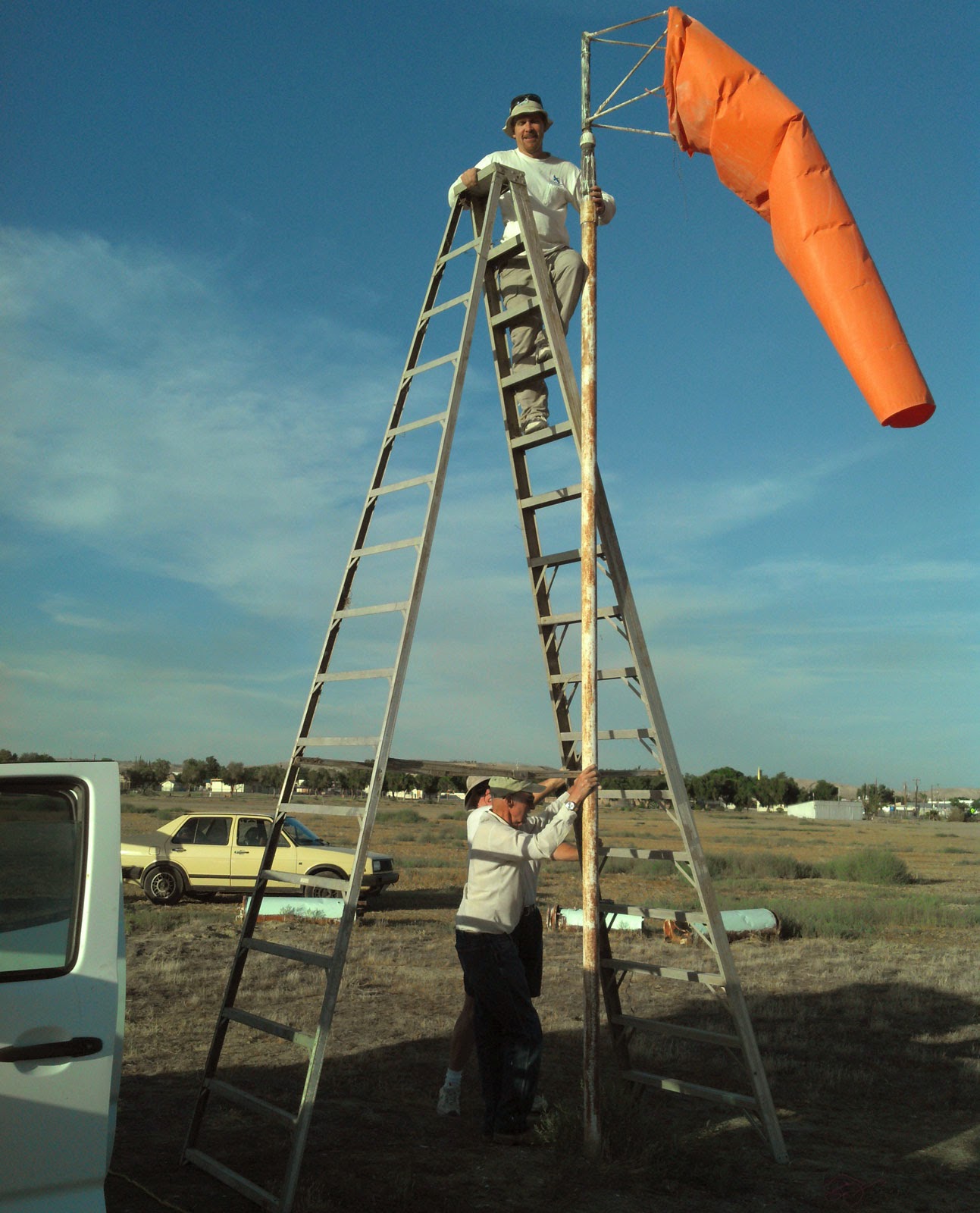