As I turned onto Highway 198 in Hanford I could see the hills beyond Avenal.  From the horizon to the peaks, the hills were clear.  Behind me, towards the cloud shrouded Sierras, was only about 30 miles visibility, but in the other 3 quadrants I judged the visibility to be 75 to 100 miles.  Nice!  But would there be lift?

There were signs of lift.  Cumulus clouds.  Cloud "streets."  But early in the day the lift appeared elusive.  Several times a glider beat the towplane to the ground.  That is to be expected on "pattern tows" and simulated rope breaks, but not on 2000' or 3000' tows.  Early reports were strong lift in spots and lots of sink everywhere else.

The weather station nearby in Avenal makes a report every 5 minutes.  During the whole gliding day, teh wind varied within the limits of "WNW" to "ENE,"  so we never had to change the takeoff runway.  Wind readings varied from 0 to 10 MPH throughout the day, with gust readings varying from 3 to 17 MPH.  At the gliderport the temperatures were very pleasant and the breeze felt good.

Thanks to Harold and Julie for also contributing pictures for this blog!
Click (or tap on) on any picture to bring up the slideshow viewer.  In Firefox and Internet Explorer, hit the F11 key to toggle to full-screen mode.  Just remember to hit F11 again to exit full screen.
We had a new tow pilot today, Michael Thometz, a controller at NAS Lemoore.  Welcome, Mike!  He did 20 tows today.  This picture was taken while Harold flew the towplane a few lifts.

Dan has come back around.  This image looks like trouble for Peter and/or Orange Crush, but it is just a telephoto lens compressing distance. 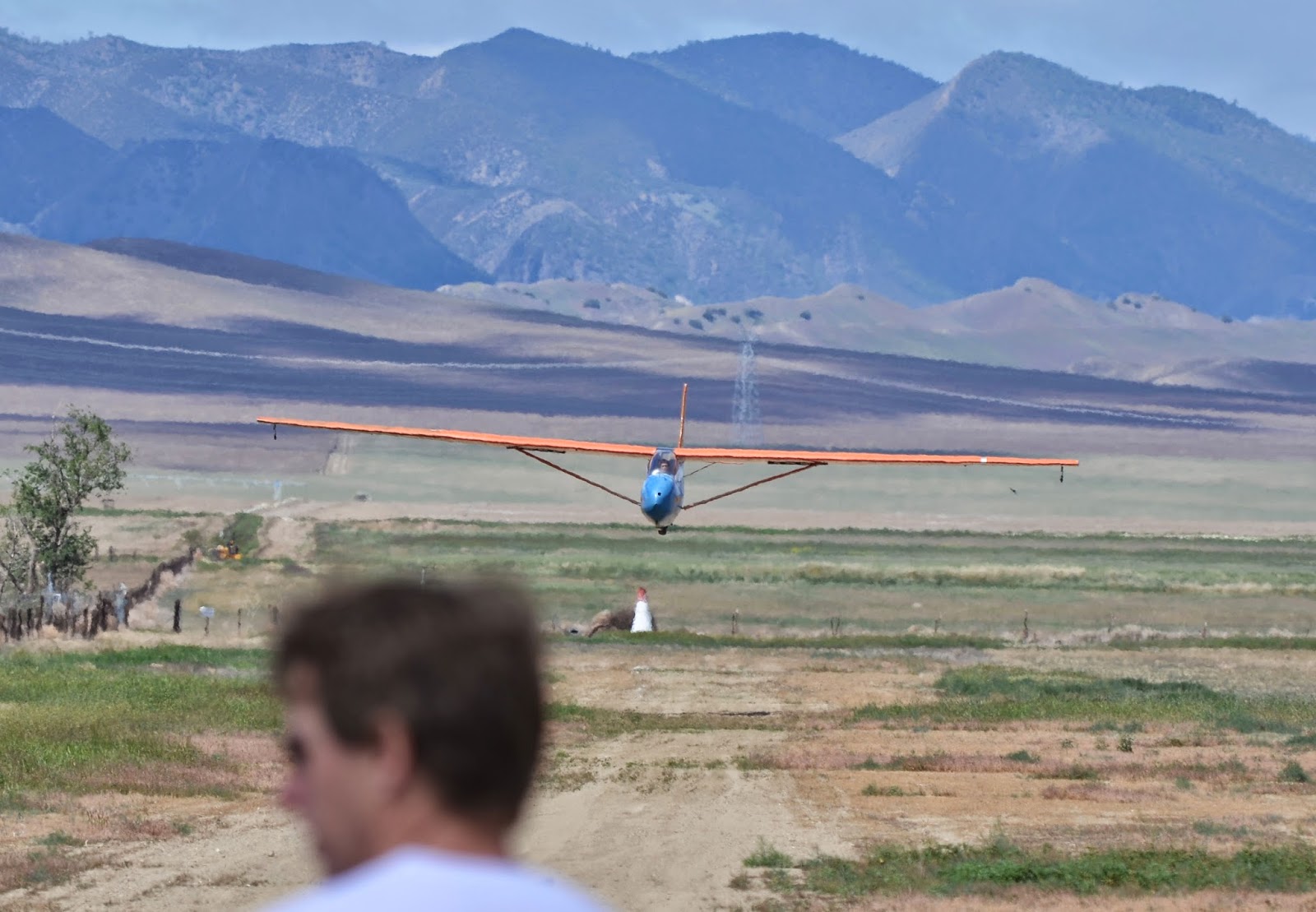 A little bit later Dan Clark is flying solo.  I did not really notice Dan's crosswind technique when looking through the viewfinder as I shot this series of images.  Looking at the screen the next morning, I see he had his timing down and did a great job!


Over three hours after launch and Morgan and Julie are still going strong.


Meanwhile, back in the launch area, a small crowd is waiting patiently.


Richard is back on the ground, Bart Klusek is seated in the Russia, Jeff Richardson is looking things over, and Harold is making sure no truths were stretched. 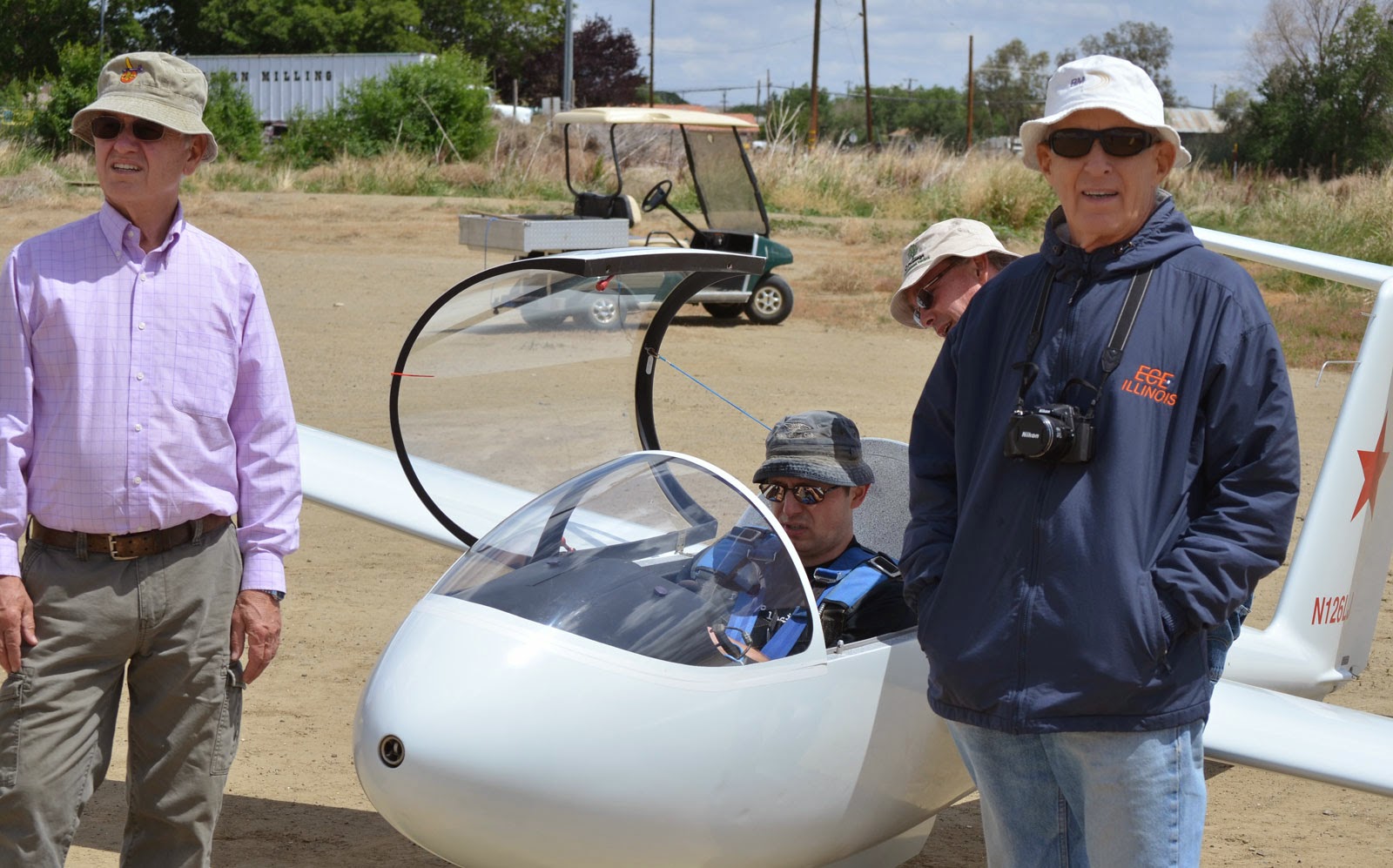 I (Jim) had almost decided to not come out to Avenal this morning.  Early in the morning the sky was nowhere near the "Mostly Clear" that was forecast.  I had a lot of stuff to do in Hanford.  But I was scheduled, so I felt obligated to go.

Many people who were scheduled before me were not finding lift.  There were several who beat the towplane down. I think it was Harold that said, "there was strong lift if you can find it, and lots of sink."  I heard somebody mention lift should be good on the upwind side of a cloud.

I got a tow up to 2300' AGL.  Was planning on releasing at 2000,' but the gliderport was exactly at my 6:00 position, and I felt I was a little far out, so I did not want to release without having visual contact.  After release I explored a little cloud street--while I had found lift on tow, I was finding sink now.  Not good.  Searched a little bit longer, then decided it was time to head back to CA69.

I started heading for a long straight-in to Runway 7.  Then I hit lots of sink.  I increased airspeed to get through the sink faster, but that only slowed down the rise of runway 7's threshold  up the canopy.  Not good.  Made a 5° turn towards a dry, sunlit field and managed to find decreased sink.  Then lift.

The lift turned out to be pretty good, which gave me a chance to go exploring for better lift.  Went back to a line of clouds, but if they had lift, I couldn't find it.  So I headed to the biggest, darkest cloud I could find, which also happened to be closer to the gliderport.

When the vario indicated good lift, I started circling.  I saw Orange Crush working closer to the gliderport, knew he did not have a vario, and hoped he would noticed that I was getting good lift.  He did, and came over to join me. 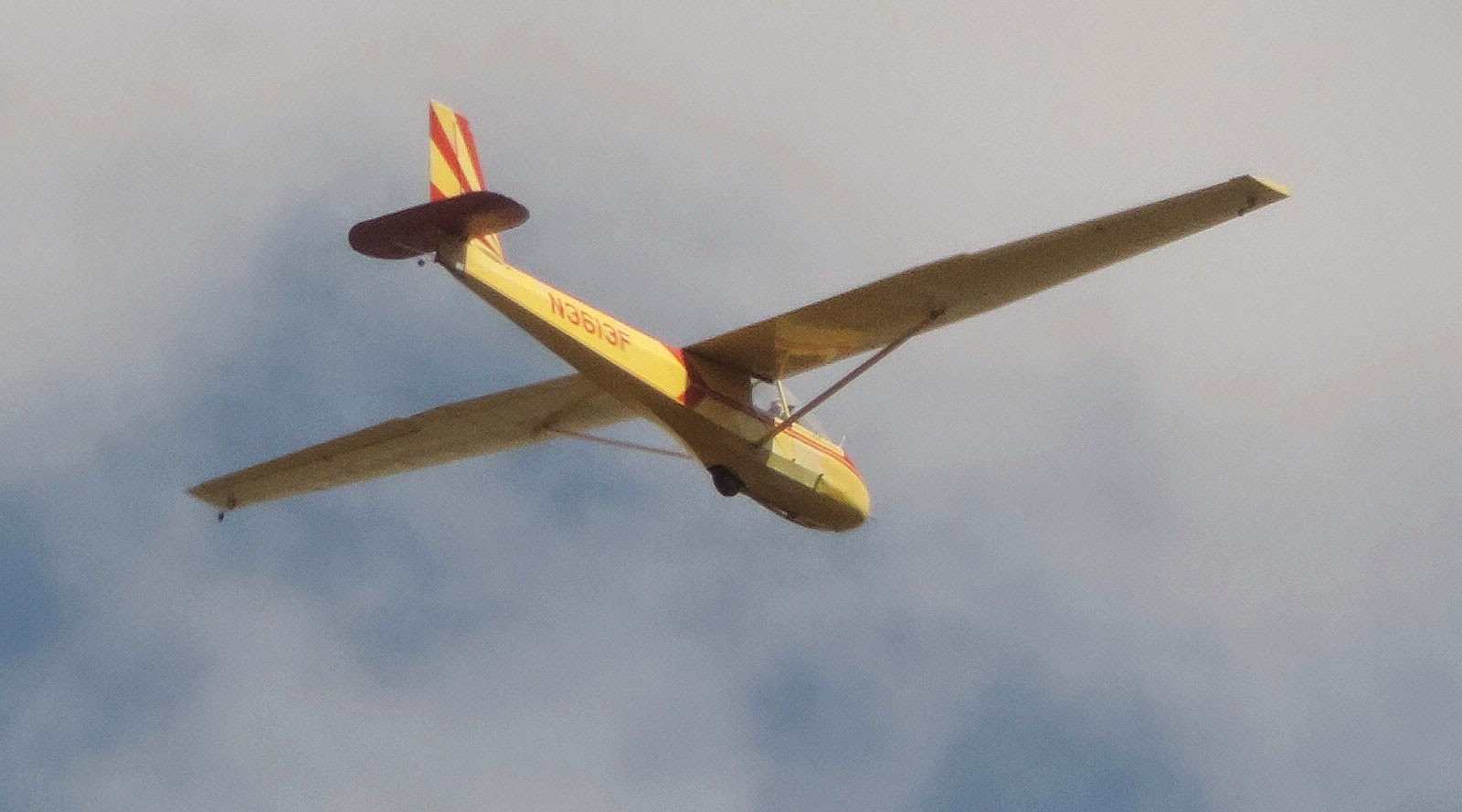 After we got established in the gaggle, we kept each other on the opposite side, 180° away.  Orange Crush was where I could see him, and I did my best to make sure I stayed where he could see me.  This is the first time I had felt comfortable in a gaggle.  In fact, it was downright enjoyable working together.

We kept rising until I was going to loose the "500' below" cloud clearance if I went any higher.  When I was heading east, towards the gliderport, I exited and dove away.  The lift was so good I would try it again! 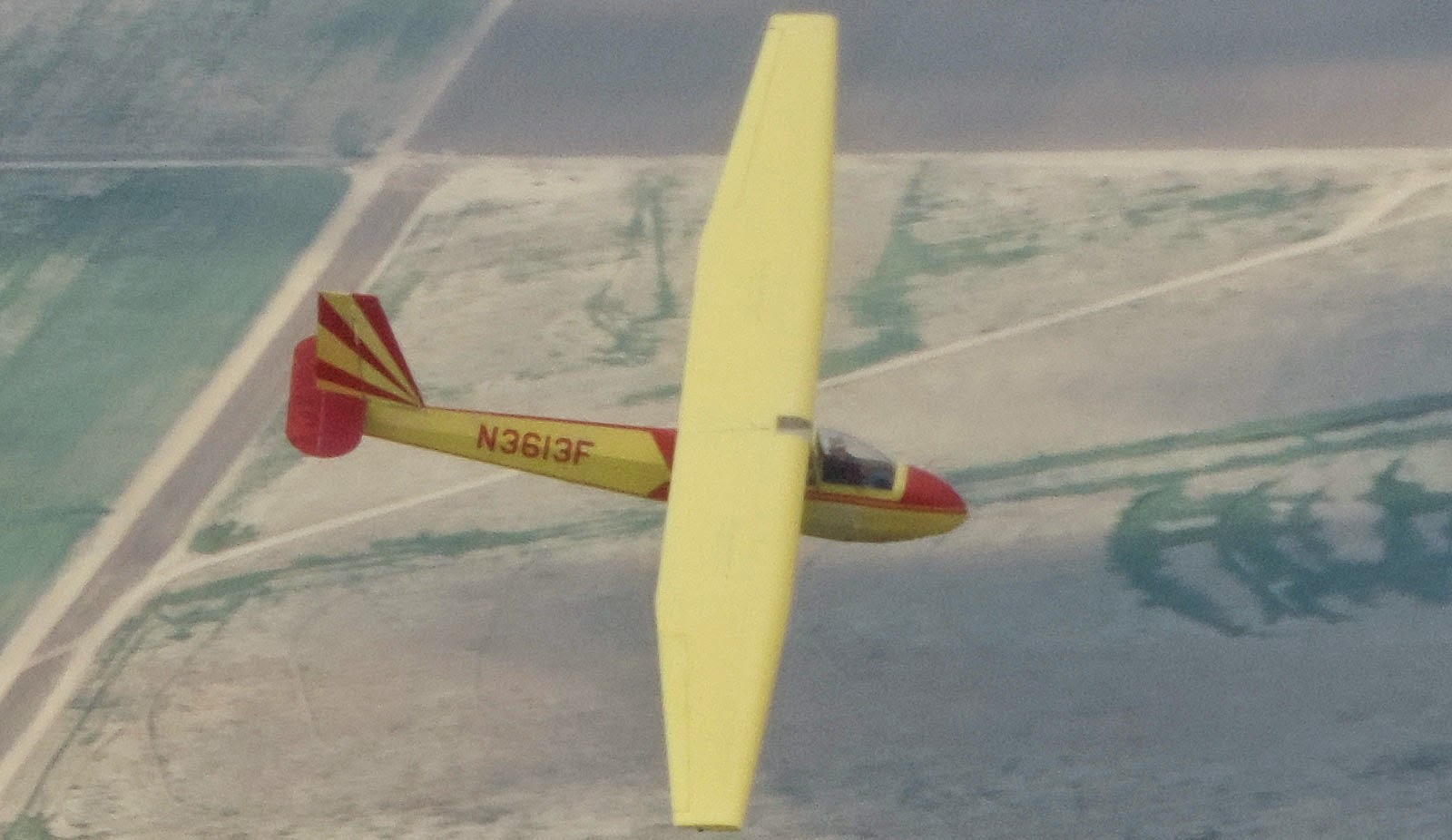 I came back, this time Orange Crush was above me.  I started following him up, but did not have luck keeping him in sight, so I exited and went to search for other lift.  I noted the lift seemed to be getting harder to find, and a look at the watched showed 4:20 PM.  Had enough altitude and was close enough to CA69 that I could still play.  Orange Crush headed to home, and I saw a big, dark cloud near the prison.  It turned out to be full of lift.  I went on the upwind side of it, maintaining 2000' horizontal separation, and was able to rise slightly above the base.

5660' was the highest of the day for me--fantastic for a day where it was hard to find lift, and a flightthat started off as a "dud." At 5:30 PM I noticed that the Duo Discus had been put into the trailer.  As far as I knew, everybody else had called it a day.  Plus, it was a little bit chilly, and all the water I had before the flight was getting a little uncomfortable.  Stepped out of the cockpit at 5:53, 2.5 hours after rudder wag.