WEATHER
Visibility:  Somewhat hazy, but good VFR
Wind: 10 kts out of the South early, lighter but still out of the South later.
Altitudes: 4000ft AGL off of tow.
Time Aloft: One hour.
Max Lift: 100 fpm
Temperature: 78 deg. F.
Comment:
Tow pilot: Bill Vrastil from Santa Ynez in the 235hp Pawnee (Spectacular!)
How many of you are familiar with 14 CFR 91.113(d)(2) (aircraft of different category on converging course, glider vs. airship)   or ever thought you would have an opportunity or the need to test it?  I thought I had seen a lot of things  after over 40 years of flying gliders, but I was mistaken, when today the GOODYEAR BLIMP flew past the Avenal airport just as we were getting ready to launch!   The wind was out of the south,  and the blimp was traveling in a southerly direction. Probably it was trying to stay low and somewhat in the lee of the coastal mountains in order to stay in lighter headwinds, it was traveling South parallel to, and just over the Kreyenhagen hills to the West of the airport at an altitude just below 3000ft MSL. As the blimp slowly approached, several gliders were qued up waiting to launch.   At the head of the grid was Jan Zanutto, the first to take off. We though we'd all be able to get in the air and get a chance to see and photograph the blimp from our gliders, but it was making remarkably good progress to the South against the headwind, and Jan was the only one who was close enough to it to get a photo from the air before it disappeared in the haze to the South.  Jim Rickey got a couple of shots of it from the ground. 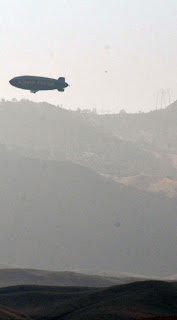 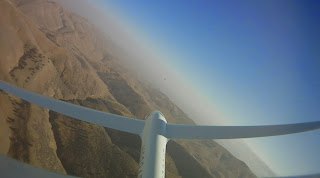 We are going to have to add a new "scenario" to our FAA scenario based syllabus.  "Lets say you were ridge soaring,  going south by Tar Canyon. You decide to make a 180 deg. turn to the left to reverse direction on the ridge. The next thing you notice is your windscreen is full of the front end of the rapidly approaching Goodyear Blimp!. You are sandwiched between the ridge on the left and the blimp on the right. Quick, what are your options?". Before, I would have laughed at the possibility of that scenario ever occurring. After today's visit from said Goodyear Blimp..... Well, I'm still laughing!  Anyway, the possibility is no longer zero.


We were very glad to have Harold back in action today. He is over his knee surgery two weeks ago. He was doing fine getting in and out of the back seat of the 2-33.

Martin Caskey had 3 flights in preparation for his commercial glider add-on rating which he is working on prior to getting his 15 meter Nugget sailplane back in the air soon. He practiced the Practical Test Standards maneuvers including stalls, flight at minimal controllable airspeed, steep 720 deg. turns to a heading at a 45 deg. bank, accuracy landings, landing with no spoilers using a slip for glider path control,  and landing without reference to the altimeter. He also boxed the wake and did a 200 ft. simulated rope break.

Andy Reisteter and Steve Schery both flew their Russias and were able to sustain for a period of time. The lift was not very good, but we did have a few dust devils at the peak time of the day.

Dan Clark was out early flying with Dan Gudgel in the Orange Crush and stuck around all day helping to run wings and hook up towlines.

Jim Rickey was out working on his commercial glider add-on rating and practiced boxing the wake, flight at minimum controllable airspeed, stalls, 720 deg. steep turns, slips to a landing without use of spoilers, accuracy landings. He also pulled duty cooking hamburgers for lunch and helped everybody else with dragging gliders around, running wings and fueling the tow plane.

Jeff Richardson was out and flew the 1-26.

We had the Pawnee tow plane  from Santa Ynez flown by Bill Vrastil,   which provided spectacular tow performance.  At one point in the morning, we had a Southerly tailwind, but were still able to operate off runway 31, with the gliders landing on 31 and stopping just short of the club house, then taking off from there. In spite of the downwind takeoff and the displaced take off point, the Pawnee was breaking ground just slightly past the tow plane hangar, and was already at about 200 - 300ft AGL by the end of the runway!  Members helped Bill refuel the Pawnee before he departed for Santa Ynez at the end of the flying day. He holds 42 gallons total,  and was down to about 12 gallons at the last top off before departing.

Mike McClellan, who has been a member in years past returned today and rejoined the club. He got his BFR completed with Harold.  We are very glad to see Mike back with us. He has been a great asset to the club in the past. He single handedly poured the footings for the hangar we were going to have before it was sadly destroyed in a windstorm a few years ago.  He also was expert at ridge soaring the Blanik and was known for flying it over to Harris Ranch, landing for lunch,  and then having Loyal tow him back while he digested his Harris Ranch beef. Mike flew as though he had never been away from soaring. So little lift in the afternoon but he managed to remain aloft 42 minutes working a weak area of lift to the northwest near the power lines. For the longest time he managed to remain at 2220 msl not gaining or losing a foot. I don't recall lift ever getting above maybe 50 fpm. So his coordination and smooth flying gave us that much time in the weak area. For those of you who don't know Mike from before, get to know him. He's a fascinating guy and one of the nicest guys I've met in years. As Alex pointed out above, he has been and will always be a rare asset to our club. Welcome back, Mike.

Carl Engel was out and flew with Harold in Big Bird. Carl hadn't flown for over a month but that didn't show as he did well especially on tow behind the Pawnee. He'll continue working his way towards his Private License doing home study for the written test and getting better each time at flight precision.

Pancho Herrera came out and flew in the 1-26. He is working on flying the Libelle soon.

Next time we have the towplane from Santa Ynez, when scheduling, we need to remember to start operations early  by scheduling  earlier, as the tow plane needs to leave Avenal about 3:30 p.m.  in order to get back to Santa Ynez with an adequate margin before dusk. Today I think we were still in a summer mode,  and have not adapted yet to the recent time change. Some people were scheduling at 2:00pm and we still had some who had not flown by 3:15 p.m.   They  almost did not get to fly at all before the tow plane needed to leave.