Tammie was sacrificial tow pilot for the day. Hot conditions and a light breeze out of the East made takeoff rolls on 31 long. The prospect of staging 10+ gliders to the other end of the field in the heat didn't excite anyone much either.

I was running late thanks to a morning spent on plumbing repair at the clubhouse. The water main had cracked and it took Richard and I an extra hour of the morning to acquire all the parts and get it glued back together.

The morning started off with a grand accomplishment.  Bart Klusek successfully passed his Commercial Glider Pilot checkride with Dan Gudgel.   This was even with a temporary halt to the flight portion thanks to a weak battery on the tow plane.  The tow plane was trying to make a point that we really need an external jumper port, something Jan had just talked to me about an hour before.  Needless to say, we'll be installing that port once Jan gets it approved by the FAA.

Aside from training flights, I think Jan was the first to launch in his DG-100. He wasn't finding much useful lift and unfortunately had a relatively short flight without connecting into the mountains.
Karl launched and took a tow to Tar Peak. Finding lift along the ridge, he fairly quickly got up and established in the mountains. Finally calling 8+ knots of lift at Black. Ethan also connected in the mountains and was able to work his way into Black and start climbing there.

Hollister pilots were zipping by to the west of Black headed towards Cammatta, 30 miles South of Black at the beginning of the La Panza range. Karl climbed through 10k at Black and gave chase.

I was granted a "cut" in line as a bonus for getting the water functional at the clubhouse and launched into the headwind from the north end of the field. With the recent scraping and tractor work, the runway is in great shape with very few squirrel holes. Unfortunately there is no crust and the dust is unbelievable. From waggling the rudders until nearly liftoff I could not see the towplane. Without any crosswind component it was really terrible and the worst IFR takeoff conditions I've experienced. Once able to lift off I was finally able to see the tail of the towplane and thankfully was in perfect position. Downhill into a headwind was the right choice with the Duo and we were off the runway early and climbing.

I took a tow to Tar peak and released in a decent little thermal. Working the SE side thanks to the wind direction I was able to get up to 4k. We bumped north towards the powerlines and got above 5k. Heading to join Ethan at Black we found a fast climb to 8k and then over Black another strong climb to 11k. With that we headed South to try to catch up with Karl, about 15 miles ahead of us to the South.
Back on the ground the launches continued. Reports were that people were struggling to find good climbs and connect to the mountains. Julie had to land for a relight. Andy also returned for a relight I believe.

Those with patience and perseverance that either stuck with it or took a second flight later in the day were able to connect and get up.

Back on course to the south it was the Hollister crew in the lead. Eric Rupp (ER), Ramy Yanez (TG), Buzz Graves (BG) and Darren Braun (U2) were all 50+ miles ahead of me and racing south along a well marked convergence line at 10K plus. Karl was heading into the La Panza range and loitering for me to catch up. Kurt Thams in (5KM DG505) was just ahead of us near Camatta. Ethan was a bit behind trying to top out at Black.

Approaching the La Panza range, 5KM and I were able to hook up and fly as a pair. Karl was 10+ miles ahead at 12k but loitering a bit. We stopped in a good thermal to climb and let 5KM catch up. With 12k in the bank we pushed south at 80 knots. 5KM couldn't quite keep up with the Duo at that speed. We slowed to 75 and were able to keep them within about a mile and we were climbing.
We caught up with Karl near New Cuyama, TG and ER were turning around down near Magic Mountain at this time. We passed Karl by cutting a corner and got a mile or so ahead of him. At one point, he lost track of us and was 1000ft lower or so. I stopped to circle and let him catch up and get a visual. Well, he'd only been about 1/2 mile behind us and quickly was 4 miles in front of us when we spotted him circling.

Onward we pushed, catching him as he topped up and then flying east to the end of the clouds where we turned at around 4pm and headed north. We didn't take any thermals from that turnpoint near Ojai all the way north to 20 miles north of Coalinga.

Most of the return flight was within 1/4 mile of Karl. We had one 30+ mile run from CA Valley to near Black mountain where we were within 300ft in formation at 100mph. It was a blast getting to pair up for that kind of a run. 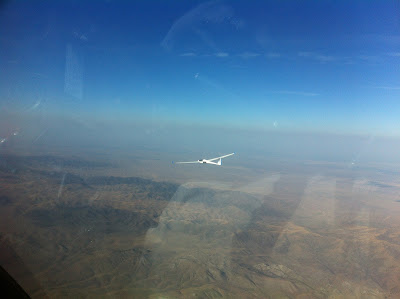 On the way north, we heard Ethan out in front of us. He'd turned down past New Cuyama as well and was finding the same easy run north. Julie had relaunched and was connecting to the convergence over Black and climbing through 11k. Bart was somewhere out there as well in the 1-26.
Nearing Black, Karl broke from formation to take a more easterly line at a blistering pace. We headed more westerly and passed over Julie on her way back south from up northwest of Coaling. 15 miles or so out of Avenal, we spotted a glider circling at 10k or so. Getting closer, it was Bart in the 1-26! Despite marking a decent thermal, we cruised past not stopping. At 9k we didn't need to stop unless the thermal was 10knots plus.
We flew up past Center Peak, Across to EL5 and up to EL4, but things weren't working quite as well so we turned back. A bit of a bad line to the center peak ridgline put us bit lower than desired. We stopped for a couple of turns and then blazed back to Avenal.
All smiles around from those that had good flights. Unfortunately a few people had not taken a later relight and missed out on the easier end of day conditions.
Fall is often one of the best times of the year at Avenal with very high heights and strong convergence lines. The days often work very late and although you may not be able to get 300km in, a 4pm launch can still deliver a satisfying multi-hour flight.

OLC Flights for 9/15 out of Avenal